Richards skyrockets to win No. 7 at Weedsport 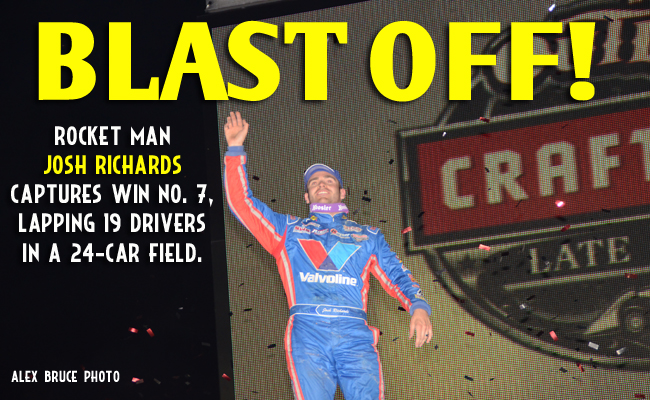 Richards skyrockets to win No. 7

WEEDSPORT, N.Y. – June 21, 2016 – Josh Richards played tag from the front row Tuesday night at Weedsport Speedway (N.Y.), leaving only five cars on the lead lap of the Finger Lakes 40 in his seventh win of the season.

“I can’t thank my guys enough,” Richards said. “They worked their butts off, and I’m just glad I can put [the car] up front for them.”

Richards, who led the 24-car field into the green flag with his No. 1 Valvoline/ Seubert Calf Ranches Rocket car, held the lead for all 40 laps. Richards won his heat earlier in the night by more than a three-and-a-half second margin, but that gap was unparalleled to how much he pulled away from the pack in the feature.

Richards maintained a similar differential through the first half of the race. The true fight was from spots four through six. Shane Clanton, Rick Eckert and Brandon Overton jockeyed for position within the first 10 laps of the feature, nearly spreading three-wide across the 3/8-mile oval. Overton relied on the top groove early, but soon forfeited the high-side of the track to Clanton, who broke into the top 5 by lap 7.

While Overton continued to fade, Clanton and Eckert chased-down third place Steve Casebolt by lap 21. The trio bunched up, weaving as a unit through lapped traffic. It took a bold move on lap 17 from Clanton’s No. 25 Weldbank Energy/ Coopers Meat Packers Capital machine however to take third. With Clanton’s fender nearly grazing the wall with every lap, he set his sights on second-place Frank Heckenast Jr.

“We were just trying to bide our time and pick our line, and we needed to get by those guys,” Clanton said. “I knew I was better than them biding my time. I knew that Josh [Richards] was long-gone…we needed a caution there at the end to see if I had anything for him. But overall: good night.”

Though Clanton bided his time thereafter, he made his move 11  laps later on Heckenast’s No. 99JR St. Louis U-Pic-A-Part/ Storage Squares Capital car; Heckenast signed with Clanton’s chassis company one month prior. Using the top groove, Clanton built enough momentum to take sole possession of second. Heckenast managed to hold on to the final spot on the podium.

“We’ve had some good runs but just with bad luck,” Heckenast said. “I’m just trying to get the ball rolling, get some confidence back, make good runs, build the bank up and get confidence for my crew guys. We were definitely a third place car. Shane [Clanton] was better than us. But, this place is awesome. I wish we could race at facilities like this every week.”

While the battles ensued, Richards increased his lead exponentially – especially within the final 25 laps of the race. Richards led by more than four seconds with 23 laps remaining, and then increased his lead to more than five seconds four laps later. At that trajectory, Richards’ largest lead was with four laps remaining at 11.116 seconds; he ultimately won by 10.363 seconds over Clanton.

Richards lapped into to top ten with 11 laps remaining. Four laps later, he passed three more drivers. His pursuit to lap the rest of the field fell just short out of the top 5.

“I really didn’t realize [how many drivers I lapped] until at the end when I saw Rick [Eckert] and [Brandon] Overton and glanced up at the board,” Richards said. “I didn’t feel like we were that good but the track was beautiful. That was the most fun track I’ve run on in a long time. They do a phenomenal job here. This is a beautiful place. I remember coming here ten years ago as a rookie and it’s really cool to come back here.”

This was not the only feat of the night, as Heckenast picked up his first fast time of the series this season with a 15.358. Overton, who claimed fourth in the feature, led hot laps with his best time of 14.882.