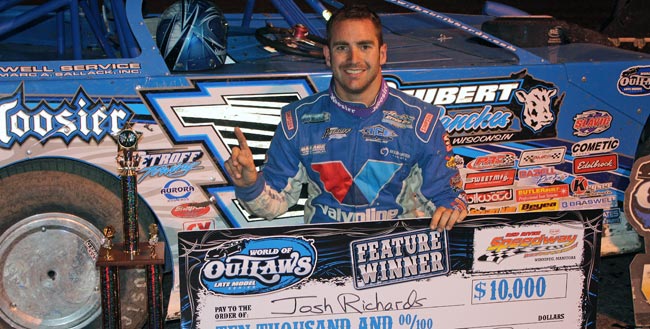 Richards, 25, of Shinnston, W.Va., used some daring moves in lapped traffic late in the race to turn back a furious challenge from Tim McCreadie of Watertown, N.Y., who ducked underneath Richards several times but ultimately crossed the finish line 3.421 seconds behind in the runner-up spot.

Defending WoO LMS champion Darrell Lanigan of Union, Ky., who won last year’s feature at Red River, finished a distant third after starting fourth. But he had to rally after a scramble between turns one and two on the race’s initial start left his car with a flat left-rear tire, forcing him to pit and restart at the rear of the field.

Brady Smith of Solon Springs, Wis., finished fourth after running in third place for much of the distance and Chub Frank of Bear Lake, Pa., placed fifth after bolting into the top five from the eighth starting spot early in the A-Main.

Richards’s $10,650 triumph was his seventh of the 2013 WoO LMS campaign, tying him with Lanigan for the lead in the high-profile category. He also extended his lead in the circuit’s standings to 38 points over Lanigan, who moved past sixth-place finisher Shane Clanton of Zebulon, Ga., in the championship battle.

It was a perfect evening of competition for Richards, who set fast time and won his heat race before capturing an A-Main that ran non-stop after a caution flag flew on the opening circuit.

“We were fortunate,” said Richards, who reached Victory Lane for the first time since sweeping the three-race Firecracker 100 by GottaRace.com weekend June 27-29 at Lernerville Speedway in Sarver, Pa. “We kind of hit it right from the start. We were good in hot laps – I was a little tight, but the guys said we were fast so we just left it alone and I just tried to focus on driving a little better. Then we were able to set fast time, win our heat, and, obviously draw the number two spot for the feature.

“We had everything going for us, so I just had to do my part and try to get out there and get some open track and get through lapped traffic the best we could.”

That wasn’t always an easy task. Richards built a lead of as much as a straightaway over McCreadie, who moved from the seventh starting spot to second by lap three, but the gap shrunk when Richards’s Valvoline-sponsored Rocket Chassis house car became enveloped by slower cars.

On lap 37 McCreadie caught Richards, ducking inside the leader on the backstretch. McCreadie pulled alongside Richards again the following, but Richards fought off the threat by aggressively slipping between the lapped cars driven by Eric Wells of Hazard, Ky., and John Mason of Millersburg, Ohio, racing down the homestretch on lap 39.

“It was a little hairy in lapped traffic,” said Richards, who registered his 46th career win on the WoO LMS. “They would dirty the track a little bit and take all the air off your car, so any little hole you got, you gotta take it. I didn’t know McCreadie was there, but I knew that he was pretty close as slow as we were going there.”

McCreadie, 39, was unable to stick with Richards over the final laps, but the former WoO LMS champion was more than satisfied with his bridesmaid finish in his Sweeteners Plus Warrior.

“We ran the same tires in the feature we ran in the heat – and we were horrible in the heat,” said McCreadie, who won the Wild West Tour opener on July 5 at Asmoil Speedway in Superior, Wis. “The track just looked like it kept peeling open and getting softer, and (before the feature) I told the guys (on his crew), ‘Well, what do you think?’ They came up with a combination, and I thank them because I was stumped all night.

“I’m just happy to come home second. Traffic helped us catch Josh. We both got clean (on the track) there and he was a little bit better.”

Lanigan, 43, authored the night’s most stirring drive, tearing through the field after his opening-lap misfortune. His car’s left-rear tire was cut in the jam-up that occurred when the polesitting Wells got out of shape between turns one and two.

“We went down in there and the 18 got a little sideways and I checked for him and the guy behind me got me,” said Lanigan, who reached third place on lap 43 but was too far behind McCreadie to bid for another position. “It really wasn’t his fault. We were all checking up – just a racing incident.

“We just got another tire and put the hammer down. The car was awesome. One caution and I think we would’ve been right there. But we didn’t get a caution and wound up third.”

Finishing in positions 7-10 was Clint Smith of Senoia, Ga., who was the last driver on the lead lap at the checkered flag; Red River standout Ricky Weiss of Winnipeg, Manitoba, who started third; Tim Fuller of Watertown, N.Y.; and Rick Eckert of York, Pa., who was coming off his first WoO LMS win of 2013 two nights earlier at Gillette (Wyo.) Thunder Speedway.

Richards topped the 26-car field in Ohlins Shocks Time Trials, turning a lap of 18.043 seconds to earn his series-leading fifth fast-time honor of 2013. It was his 36th career fast time, moving him one ahead of Eckert for the alltime tour lead in the category.

Heat winners were Richards, Wells and Lanigan, and Ward Imrie of Winnipeg, Manitoba, captured the B-Main.