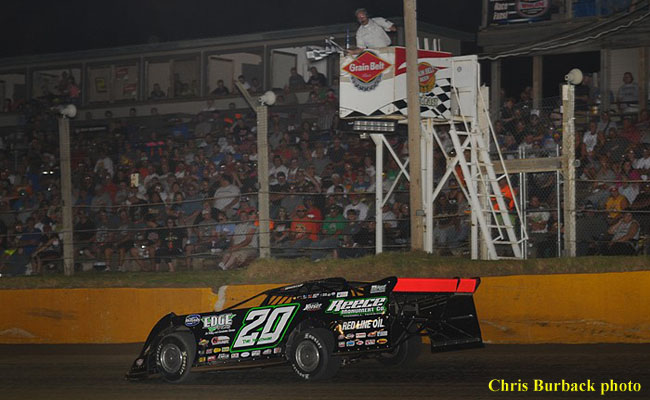 NEW RICHMOND, Wis. – Aug. 1, 2014 – Jimmy Owens’ quest to add another crown jewel victory to his resume got off to a great start Friday night at Cedar Lake Speedway.

“You try to win every race, but this is one we’d really like to get,” said Owens whose best USA Nationals finish is a runner-up performance in 2012. “I’d love to win in front of this crowd. These people just get so pumped up and it gets you pumped up and really makes you wanna run good.”

After qualifying seventh in the second of two qualifying groups, Owens took advantage of a nine-car invert to claim the sixth heat race from the pole. He later drew the pole for the dash and pulled away from Jason Feger of Bloomington, Ill., and Bobby Pierce of Oakwood, Ill., in the six-lap race. Jonathan Davenport of Blairsville, Ga., finished fourth with defending USA Nationals winner Tim McCreadie of Watertown, N.Y., and surprise heat winner Jordan Yaggy of Rochester, Minn., completing the finishing order.

“We’ve had a pretty good car all weekend,” said Owens, who finished third behind Jimmy Mars of Menomonie, Wis., and Darrell Lanigan of Union, Ky., in Thursday night’s USA Nationals tune-up race. “We came up through there last night and tonight we ran pretty good in our heat and were OK in that dash. I think we’ve got a good hot rod. We’ve just gotta play our cards right and pace ourselves, and we should be good tomorrow.”

Feger started from the outside pole of the dash and challenged Owens through the first two laps before Owens eased away. Feger, the former DIRTcar Summer Nationals and UMP national champion, was disappointed not to win the race, but was satisfied to grab the outside pole for the start of Saturday’s 100-lapper.

“I was frustrated because I really wanted to beat Jimmy,” said Feger, whose best USA Nationals finish in five starts is an eighth-place finish in 2009. “But after I got out of the car I was like ‘Hey, maybe we’re better off starting second.’ It’s a long 100 laps; it’d be hard to go that long on the top here. But the cars working really good, so we’re gonna do our best to be there at the end.

“To win a crown jewel is what we’ve been after for a few years. This is an awesome place with awesome fans and probably the coolest trophy in my mind. That eagle would look awful nice sitting in our shop.”

Feger opened the heat race action with a convincing victory in the first of the 15-lap prelims. Starting from the outside pole, he outdueled polesitter Jimmy Mars to grab the lead early and pulled away through the remaining distance.

Mars, who earned his second WoO LMS victory of the season in Thursday’s tune-up race, held off Shannon Babb of Moweaqua, Ill., in a side-by-side finish for second. Babb pressured Mars for most of the distance before settling for the third and final transfer spot.

Of the six heat race winners, Davenport’s performance in the second race was perhaps the most impressive. Davenport charged from third to first on the race’s opening lap and never looked back, building a half-track advantage over Brady Smith of Solon Springs, Wis., and Brandon Sheppard of New Berlin, Ill.

McCreadie led all the way in the third heat but had to survive heavy pressure from five-time USA Nationals winner Billy Moyer of Batesville, Ark., for most of the distance. Moyer searched high and low to find a way around McCreadie before finally using a low-side run to pull even with McCreadie off the final turn. But McCreadie was up to the challenge and edged ahead to win in a side-by-side finish.

Steve Francis of Ashland, Ky., took advantage of Mason Zeigler’s miscue to grab the third and final transfer spot. Continuing his breakout summer, Zeigler of Chalk Hill, Pa., started the night by posting fast time during Ohlins Shocks Time Trials. But his night ended on a sour note when he jumped the turn-three cushion and slapped the wall while battling McCreadie and Moyer midway through the race.

Pierce used a three-wide pass to move from third to first on the opening lap of the fourth heat race and pulled away through the remaining distance. Billy Moyer Jr. of Batesville, Ark., charged from sixth to second, while WoO LMS points leader Darrell Lanigan recovered from a lap-one miscue to take third from Clint Smith of Senoia, Ga., on the final lap.

Yaggy pulled of a surprise prelim victory in the fifth heat. The 23-year-old Super Late Model newcomer started from the pole and survived heavy pressure from Brian Birkhofer of Muscatine, Iowa, to score the victory. Birkhofer settled for second with Eric Wells of Hazard, Ky., just behind in third.

Owens led every lap of the sixth and final heat, pulling away from five-time USA Nationals winner Scott Bloomquist of Mooresburg, Tenn., after an early battle. Nick Anvelink of Navarino, Wis., finished third to earn the final A-Main transfer.

A stellar field of 50 cars was signed in for Friday’s action. Zeigler was the overall fastest qualifier in Ohlins Shocks Time Trials, turning a lap of 14.002 seconds in Group A of the split session. Bloomquist was fastest in Group B at 14.301 seconds. The top nine drivers in each qualifying group were inverted to set heat race lineups.

Saturday’s USA Nationals finale, which also includes a full program for NASCAR Late Models, is scheduled to begin with hot laps at 6:15 p.m. CDT. Two 20-lap B-Mains will lead off the Late Model portion of the action, with the 100-lap A-Main to follow.