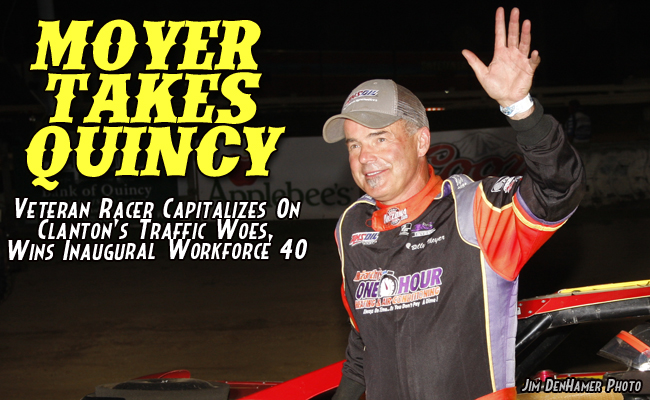 QUINCY, Ill. – July 23, 2015 – Billy Moyer finally found himself on the winning side of lapped-traffic problems Thursday night at Quincy Raceways.

After experiencing his own mishaps in traffic in a number of events earlier in the season, Moyer, 57, of Batesville, Ark., capitalized when Shane Clanton of Zebulon, Ga., nearly hit a slowing car with two laps remaining in Thursday’s inaugural Workforce 40. The three-time WoO LMS champion raced ahead and held Clanton off through the race’s final two laps to earn an $8,100 victory in front of a capacity crowd at the western Illinois track.

“That was a bad deal there for Shane, but it’s happened to me a couple times this year,” said Moyer, the veteran racer who claimed two of his WoO LMS titles during the tour’s first incarnation in the late 1980s before earning his only modern-era championship in 2005. “We got the lead and I was just trying to not to do something stupid and overrun the corner or slip up and let him get back underneath me. That last corner, I just kind of tip-toed around the bottom.”
The pole-starting Moyer led the race’s first 18 laps in his Mesilla Valley Transportation-sponsored Victory Race Car before allowing Clanton, who started fifth, to slip by in traffic. After pressuring Clanton through the race’s middle stages, Moyer had dropped to nearly a straightaway behind before Eric Wells’ slowing machine forced Clanton to stall his car on the front straightaway.

As Clanton continued rolling and rushed to refire the engine in his Capital Race Cars house car, Moyer swept pass. Clanton pulled back alongside Moyer the following lap, but Moyer edged back ahead and held on over the final circuit to claim his 42nd-career WoO LMS victory by a half-second margin.

Clanton settled for the runner-up spot, stretching his WoO LMS points lead to 196 points over Josh Richards of Shinnston, W.Va., who finished third in the Rocket Chassis house car. Brandon Sheppard of New Berlin, Ill., was fourth in his Rocket machine with Tim McCreadie of Watertown, N.Y., rounding out the top five in another Rocket.

With a lead of more than three seconds in the closing laps, Clanton appeared to be headed toward what would’ve been his ninth WoO LMS victory of the season. It nearly turned out much worse when Wells slowed to exit the track just in front of him, but Clanton was able to avoid contact by nearly coming to a stop. His car’s engine stalled in the process, but he continued rolling and refired before causing a caution.

“Overall it was a good night,” said Clanton, who recorded his 22nd top-five finish in 25 WoO LMS A-Mains this season. “We led a bunch of laps and we definitely had the best car, I think. It was just driver error. I should’ve went to the top that lap, I guess.”

Richards’ third-place finish marked a major turnaround after qualifying 10th in the second of the night’s two qualifying groups. He rallied to finish second in his heat race and was gaining ground in the feature after starting seventh before running out of time to make a run at the leaders.

“I was kind of disappointed when I looked up and saw the white flag. I felt like we were just starting to get rolling there,” said Richards, who earned his 13th top five on the season. “The guys did a great job. My crew worked their tails off after qualifying.”

The race ran caution free following an opening-lap spin by Brian Shirley of Chatham, Ill., that collected Wells of Hazard, Ky., and Jordan Yaggy of Rochester, Minn. All three cars continued running and reassumed their original starting spots for the complete restart.

Shirley rebounded to finish sixth in the race with ninth-starting Chub Frank of Bear Lake, Pa., placing seventh after climbing as high has fourth during the early going. Morgan Bagley of Longview, Texas, advanced from his 17th starting spot to finish eighth with 13th-starting Rick Eckert of York, Pa., ninth. Frank Heckenast Jr. of Frankfort, Ill., climbed from 19th to round out the top 10.

The WoO LMS remains in the Land of Lincoln to for the weekend with a trip to Fairbury (Ill.) American Legion Speedway for the 26th annual Prairie Dirt Classic presented by Bank of Pontiac on Friday and Saturday. Friday features PDC qualifying and heat races as well as the inaugural #FALS Draw Showdown, a $5,000-to-win, 25-lap shootout. Saturday features PDC Last-Chance Showdowns and the $26,000-to-win Prairie Dirt Classic finale. Visit www.fairburyspeedway.com for more information.