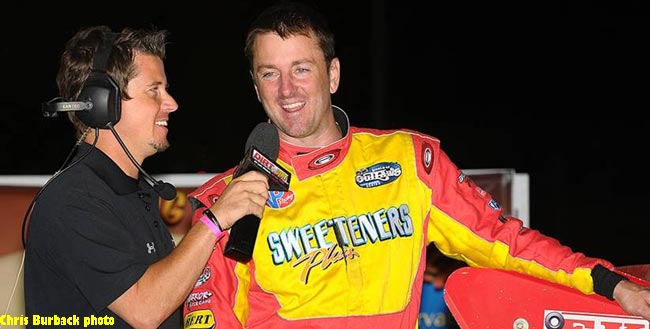 NEW RICHMOND, WI – Aug. 2, 2013 – After two straight years of disappointing performances in the USA Nationals, Tim McCreadie thrust himself squarely into the mix for the crown-jewel event’s $50,000 top prize with a powerful Qualifying Night performance on Friday at Cedar Lake Speedway.

McCreadie, 39, of Watertown, N.Y., won the six-lap dash for Friday night’s six heat winners, earning him the pole position starting spot in Saturday night’s 26th annual USA Nationals finale. It will mark the first time he has taken the green flag in the 100-lap World of Outlaws Late Model Series event with serious designs on victory since he started fifth in the 2010 edition.

“This is a lot more fun than going into the race the way we did the last two years,” said McCreadie, who registered dismal finishes of 25th in 2011 and 26th in 2012 after using WoO LMS points provisionals to start both events. “I always feel like if we’re close anywhere, we can make small adjustments to get the car right – but it’s been a few years since we’ve even been close here. We’ve just struggled so bad at this race, so it feels good to know we’ve got a car that should give us a chance this year.”

McCreadie won Friday’s fourth 15-lap heat race by 3.882 seconds – the largest margin of any heat winner – and then roared off the outside pole to take the lead from polesitter Josh Richards of Shinnston, W.Va., at the start of the dash. The 2006 WoO LMS champion pulled away from Richards during the short sprint, beating the national tour’s points leader to the finish line by several car lengths.

Richards, who outdueled Jimmy Owens of Newport, Tenn., to win the fifth heat, settled for a runner-up finish in the dash, giving him the second starting spot in the USA Nationals. He will bid for victory in his first USA Nationals start since winning the event in 2011.

A.J. Diemel of Elk Mound, Wis., finished third in the dash, putting the home-state favorite on the inside of the second row for the start of the USA Nationals. Rick Eckert of York, Pa., 16-year-old Bobby Pierce of Oakwood, Ill., and Chad Simpson of Mt. Vernon, Iowa, finished in positions 4-6 and will start the 100-lapper from those positions.

McCreadie has certainly enjoyed success at Cedar Lake in the past. He’s started the USA Nationals A-Main seven times, with a career-best finish of third in 2009 on his resume. The former DIRTcar Big-Block Modified regular also has two fourth-place finishes (’05, ’07), a 12th-place run in 2010 (after a flat tire and overheating engine knocked him from contention) and a 20th-place finish in 2008 (broke a right-rear wheel while leading).

With Friday night’s racing surface – which was drier, and slower, than Thursday evening’s tacky, fast track – suiting both his Sweeteners Plus Warrior and his own taste, McCreadie is hopeful that similar conditions will prevail for Saturday night’s century grind.

“I feel like if it gets faster we might not be as good as Josh (Richards) and maybe Brandon Sheppard (Thursday night’s WoO LMS winner),” said McCreadie, who won a DIRTcar UMP-sanctioned preliminary feature during the 2010 USA Nationals weekend. “But if it can slow down to in between the conditions on Thursday night and tonight, I think we’re gonna be O.K.”

A winner of four WoO LMS A-Mains this season, McCreadie is energized by his strong qualifying effort.

“Whenever you can go to an event like this and be relevant it’s awesome,” said McCreadie. “This race is it. We might be lacking a few guys here and there, but this field is the cream of the crop for Late Model drivers. And this is one of the biggest races we have all year long, so when you can be competitive it’s great.

“I don’t know if we’re gonna pull it off or not (on Saturday), but I feel like we can.”

Fifty-three cars were signed in for Friday night’s qualifying program.

Ohlins Shocks Time Trials were split into ‘A’ and ‘B’ groups, with the first half competing for starting positions in heats 1-3 and the second half racing against the clock to align heats 4-6.

Donnie Moran of Dresden, Ohio, was the overall fastest qualifier with his lap of 14.815 seconds in Group ‘A.’ It was the fourth career WoO LMS fast-time honor for Moran, who will start 15th in the USA Nationals after finishing third in the third heat.

A winner of the USA Nationals in 1998 and second-place finisher on four occasions, Moran will start the event for the first time since 2006.

The USA Nationals grand finale program on Saturday (Aug. 3) will include two B-Mains, a last-chance race and the 100-lap USA Nationals plus a full show for Cedar Lake’s NASCAR Late Models. The action scheduled to begin with hot laps at 6:30 p.m. CT and racing at 7 p.m. CT.

Tonight’s program will include Ohlins Shocks Time Trials, heat races and a dash that will set the front portion of tomorrow night’s finale on the high-banked, three-eighths-mile oval.

McCreadie outgunned polesitter Josh Richards for the lead at the start of the dash and rolled on to defeat the WoO LMS points leader, who will start second in the 100. Fellow heat winners A.J. Diemel, Rick Eckert, Bobby Pierce and Chad Simpson finished in positions 3-6 and will start from those spots, respectively, tomorrow night.

8 p.m. CT – Donnie Moran, who won the USA Nationals in 1998 and finished second in the event four times but hasn’t started the A-Main since 2006, was the overall fastest qualifier in Ohlins Shocks Time Trials. His lap of 14.815 seconds in Group ‘A’ earned him his fourth career WoO LMS fast-time honor.

Brandon Sheppard, meanwhile, was fastest in Group ‘B’ with a lap of 15.139 seconds, continuing the momentum he gained with his A-Main victory last night.

7:15 p.m. CT – Hot off his victory in last night’s WoO LMS A-Main, 20-year-old Brandon Sheppard showed he’s serious about the rest of the weekend after flashing some serious speed during tonight’s hot laps. He topped the speed chart with a lap of 14.472 seconds.

With the track presenting a new challenge tonight – it’s drier, and thus slower, than last night’s tacky, hammer-down surface – Donnie Moran was second-fastest in practice with a lap of 14.472 seconds. Bobby Pierce was third-fastest (14.540), followed by Chad Simpson (14.598) and Dillon Wood (14.648).

6 p.m. CT – Pennsylvania’s Chub Frank finds himself manning an interesting spot in the Cedar Lake pit area this weekend: smack dab among a contingent of southerners.

Frank regularly caravans to WoO LMS events with his new Mississippi buddy Bub McCool, so that explains why ‘Chubzilla’ is surrounded by boys from McCool’s neck of the woods. Sandwiching Frank’s hauler are those of Mississippi’s Ross Camponovo and Arkansas racer (and first-time Cedar Lake visitor) Clay Fisher, with McCool right there as well parked next to Fisher.

Considering Frank’s total southern immersion this weekend, Camponovo was asked if he thinks Chub will pick up a southern drawl before heading home. “That just might happen,” quipped the ever-smiling Camponovo.

5:45 p.m. CT – Tonight’s card will include split qualifying for the 52 cars currently signed in. Drivers in Group ‘A’ will compete for starting spots in Heats 1-3, while those in Group ‘B’ will battle for positions in Heats 4-6. A nine-car inversion for each group will be utilized, putting the ninth-fastest qualifier on the pole of a prelim.

Six 15-lap heat races are scheduled, with the top-three finishers from each transferring to tomorrow night’s 100-lapper. Each heat winner will move to tonight’s six-lap dash, from which the finishing order will set the first six starting spots in the USA Nationals.

5:10 p.m. CT – With another beautiful day prevailing — temperatures in the upper 70s under partly cloudy skies — the anticipation for USA Nationals Qualifying Night is building around Cedar Lake Speedway.

It appears that tonight’s field should be right around the 52 cars that competed in last night’s WoO LMS USA Nationals preliminary program. A handful of last night’s entrants — Pat Doar, Scott James, John Winge and Chad Williamson — have informed officials that they will not compete tonight, while additions include former USA Nationals champ Scott Bloomquist, ’98 winner Donnie Moran, Jimmy Owens (last year’s runner-up), Chad Simpson (last year’s fastest qualifier) and Terry Casey, who has been serving this year as the crew chief for Canadian Ricky Weiss but will don a drivers’ suit tonight and run Weiss’s backup car.