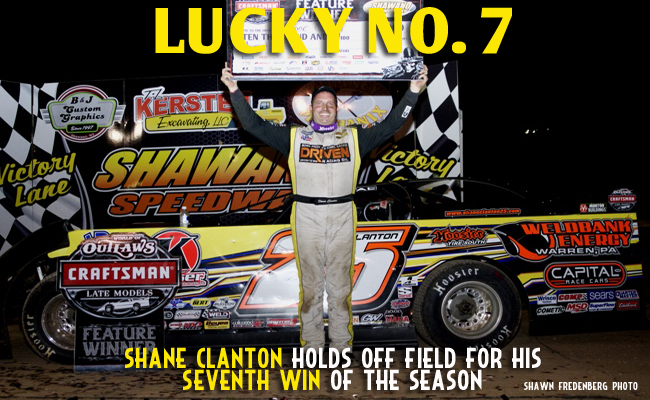 SHAWANO, Wisc. – August 2, 2016 – Rivals Shane Clanton and Josh Richards battled down to the wire Tuesday night at Shawano Speedway (Wisc.), but there could only be one top dog at the checkers of the “Sun Drop Shootout.” It was Clanton who idled into victory lane in front of a packed grandstand. This was win No. 7 for the “Georgia Bulldog.”

“It takes a great piece under the hood to make these big half-mile [tracks] work,” said Clanton, who has won at two other half-mile tracks this season (Volusia, Mason City).

Before the green flag waved the field in, Clanton – the series defending champion – climbed one position to start in the first row on the outside. Jimmy Mars was supposed to lead the pack. But, an impromptu tire change before the feature sent him to the back of the pack.  This left two former champions to a drag race down the front stretch for the lead. Clanton and 2011 series champion Rick Eckert led the stampede of cars into turn one, where Clanton had the advantage on the outside. He took the lead.

Within the first 10 laps, the margins were equally divided among the top three – Clanton, Eckert and points leader Richards. The group spaced-out into approximately 1.3-second margins, and it stayed that way until the group hit lapped traffic on lap 11.

Clanton comfortably held his ground on the top of the cushion, while Richards sank underneath Eckert. The two battled it out, only for Richards to claim sole-possession of second place with 31 laps remaining. Eckert was able to take back the spot using lapped traffic as a blocker for Richards seven laps later, but Richards’ strong No. 1 Valvoline/ Seubert Calf Ranches Rocket car would end the battle shortly after.

Richards now had his sights set on Clanton’s No. 25 Weldbank Energy/ Coopers Meat Packers Capital racecar, but a pattern in the race deterred him from moving up into the lead. Richards managed to close the gap to 0.69-seconds with 20 laps remaining, but that was as close as he would get. The trend: a lapped car separated the two for the majority of the race, giving Clanton the buffer he needed to take care of business.

“I don’t know if I could’ve passed Josh, but he couldn’t pass me in lapped traffic there,” Clanton said. “I just kept my mind to what I needed to do, and just made as much momentum as I could. I held him off…I don’t know how. My right rear tire is going flat right now. I can hear it hissing. I just got tight the last five or six laps and the lap cars just fell in the right place.”

This was Richards’ 26th top 10 finish in 27 feature races. Richards said the car’s carburetor troubles throughout the night negatively affected his arc through the corners, though his team made adjustments to help his case for the 50-lap feature. The A-Main was a caution-free one, which wore on the cars toward the end.

“I think we were just as good as he was, if not a little bit better at times,” Richards said. “The carburetor was stumbling so badly in the middle of the corner. I think we would have had something for him, but [Shane] did a great job and did what he needed to do. I think we were all dying at the end and the tires were starting to slip a little bit.”

Within the final stretch of the race, Eckert found himself in a battle with young-gun Brandon Overton. Overton swept under Eckert in turn three, getting his podium spot – momentarily. In the final five laps, former World 100 winner Earl Pearson Jr. wheeled his No. 1P Freeport Recycling Center/ MDI Environmental Systems Black Diamond car overtook Overton to close-out the race.

“I wish we had a couple cautions,” Pearson said. “Those guys got so far out there. We’re happy to come home with third. I love coming here, running second to Shane last year. So, we’re hanging in there. We got good right around the bottom, but we just needed a caution to see if we could do anything with them.”