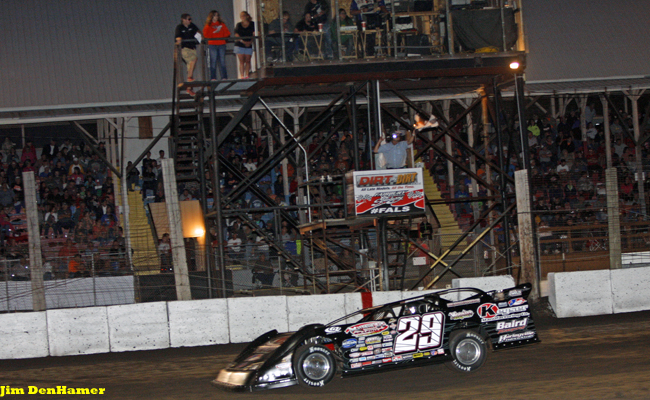 FAIRBURY, IL (July 25) — Two of the country’s hottest Dirt Late Model drivers — one an accomplished veteran superstar, the other a young up-and-comer who burst onto the national scene in the last week — played starring roles in the heat-race action that opened the 25th annual Prairie Dirt Classic weekend Friday night at Fairbury American Legion Speedway.

All six heat winners will redraw on Saturday night for starting positions in the first three rows of the Prairie Dirt Classic.

Coming off his WoO LMS-leading 10th victory of 2014 on Thursday night at Independence (Iowa) Motor Speedway, Lanigan, 42, ran away with Friday’s sixth heat race. He burst from the third starting spot to the lead in short order and cruised to a final victory margin of 2.894 seconds — a full straightaway — over Dennis Erb Jr. of Carpentersville, Ill.

Lanigan’s run came one year after he struggled mightily at Fairbury. He failed to qualify through a heat race last year and was lapped twice during the feature, absorbing one of his worst outings of the 2013 season.

“I was kind of dreading coming here after last year,” said Lanigan, who holds a commanding lead in the WoO LMS points standings. “But our (self-designed Club 29) car has been so good this year, I didn’t feel so bad about it. When you’ve got a car that’s as unbelievable as ours has been, you don’t mind going anywhere.”

Zeigler, meanwhile, proved his breakout showing last week on the UMP DIRTcar Summernationals — back-to-back wins at Brushcreek Motorsports Complex in Peebles, Ohio, and Attica (Ohio) Raceway Park — was no fluke with an electric run to the checkered flag in Friday night’s fifth heat. Making his first-ever start at Fairbury, the young Keystone State racer charged forward from the sixth starting spot to pass Jimmy Owens of Newport, Tenn., for the lead on lap 13 and then held off the Dirt Late Model superstar’s final-circuit challenge.

“It felt pretty good to do that,” Zeigler said of the slider he pulled to surge by Owens. “I hope I did it clean. I had my (crew) man Darrell on the back straightaway giving me signals telling me to go for the slide job. I knew when Darrell gave me the signal, it was time to go.”

Zeigler was almost at a loss for words after his latest success at an unfamiliar track.

“I stated sixth in the heat race and we were able to pass (Rick) Eckert, (Tim) McCreadie, Brady Smith, Jimmy Owens,” said Zeigler, who drove a family-owned Longhorn Chassis car. “I was just ecstatic as we were rolling through there. I didn’t even think what was happening, was happening. I was just sort of like, ‘Holy crap!’ I was just so excited.”

A banner field of 60 cars was signed in for Friday’s action.

Babb was the overall fastest qualifier in Ohlins Shocks Time Trials, turning a lap of 12.388 second in Group 1 of the split session.

Saturday’s PDC finale, which also includes a full program of UMP Modifieds, is scheduled to begin with hot laps at 5:45 p.m. CDT. Two 20-lap B-Mains will lead off the Late Model portion of the action, with the 30-lap Prairie Dirt Shootout for non-qualifiers and the 100-lap feature to follow.