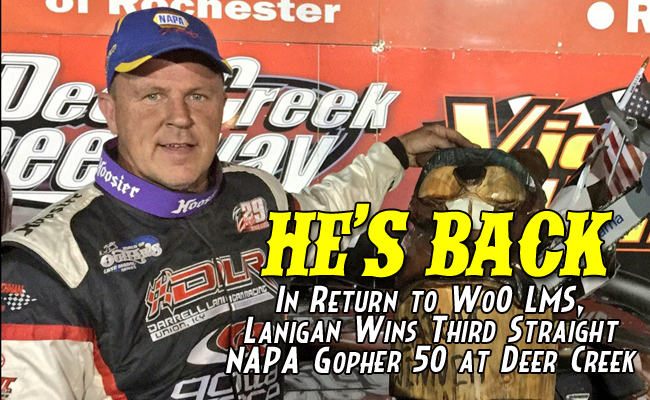 Returning to the World of Outlaws Late Model Series after a one-race hiatus, Lanigan, the three-time and defending series champion from Union, Ky., led the final 13 laps of Saturday’s NAPA Auto Parts Gopher 50 at Deer Creek Speedway to score his first WoO LMS victory of the season.

Driving a second Wayman McMillan-owned Black Diamond by Club 29 Race Car as a teammate to Morgan Bagley, the second-starting Lanigan overtook polesitter Boom Briggs of Bear Lake, Pa., on lap 38 and led the remaining distance to earn $11,900 for the 71st WoO LMS victory of his career and his third consecutive Gopher 50 triumph.

“This is definitely special to come back up here in Morgan’s car and get the win,” said Lanigan, who after struggling through the first half of the WoO LMS season pulled his own race team off the national tour following July 9’s event at Hibbing (Minn.) Raceway to refocus the team and his Club 29 Race Cars business. “It just shows what kind of equipment we’ve got. We’ve did a lot of testing this year for everybody else and it’s kind of got us behind a little bit. We’re gonna go back and build us a new car like Bagley’s here and go from there.”

Earning his first victory since winning a single-season record 17 WoO LMS events in 2014, Lanigan, 45, took the checkereds 0.872 seconds ahead of sixth-starting Chub Frank of Bear Lake, Pa. WoO LMS points leader Shane Clanton of Zebulon, Ga., advanced from his seventh starting spot to finish third, while Briggs slid back to fourth at the finish. Frank Heckenast Jr. of Frankfort, Ill., survived power-steering issues to finish fifth after charging to second and challenging Briggs for the lead early in the race.

The return to victory lane came in Lanigan’s second night behind the wheel of Bagley’s backup machine. The first night at Gillette (Wyo.) Thunder Speedway on July 14 saw Lanigan win his heat race to earn a front-row starting spot before thunderstorms washed out the night’s A-Main.

Lanigan was again on the front row for Saturday’s feature, but it wasn’t until the second half of the race that he became a factor. After fading to fourth early, Lanigan moved back up third by the time the second of the race’s two cautions waved on lap 33.

After quickly taking second from Heckenast on the restart, Lanigan began to challenge Briggs for the lead. Lanigan used a hard dive into turn three on lap 34 to briefly race ahead of Briggs, but Briggs crossed Lanigan over and pulled back out front by the time the two leaders reached the flag stand.

Lanigan used a more conservative approach on his second attempt at passing Briggs, constantly working the leader over before completing the winning move exiting turn four on lap 38.

“That caution was what I needed,” Lanigan said. “Frankie gave me the outside (for the double-file restart) and I knew that was a mistake. We had a little harder tire on than I think they did, but once they gave me that outside and that black, I was good.”

After restarting fifth following the lap-33 caution, Frank followed Lanigan forward to grab third on lap 34. He took second from his teammate Briggs shortly after Lanigan went by for the lead and began to close the gap. But Frank’s bid to end a nearly six-year WoO LMS winless streak came up just short.

“We were a little hard on tire,” said Frank, who drove his Sorbera Family Chiropractic-sponsored Longhorn Chassis to his ninth top-five finish of the season. “Once the track totally went slick I could get around the bottom pretty good and go through the middle pretty good. That restart, I really stuck good and got by those guys.

“I was catching Darrell, but passing him would’ve been tough. It was hard to pass, but you could race all over. That’s what’s awesome about this track.”

After running just outside the top five for most race, Clanton also charged forward on the lap-33 restart to cross the finish line third in his Weldbank Energy Capital Race Cars house car. His 10th straight top-five finish stretched his advantage in the WoO LMS standings to 194 points over Josh Richards of Shinnston, W.Va., who finished eighth.

“We went a little softer on tires than the guys in front of us,” Clanton said. “That caution helped, but we just needed two or three where it would kill the edges on their tires and maybe they wouldn’t come back. But overall we had a good night.”

Looking for his first career WoO LMS victory, Briggs controlled the early portions of the race and was maintaining a comfortable margin through traffic before the lap-33 caution erased his advantage.

The sophomore WoO LMS competitor battled valiantly to keep Lanigan behind him following the restart, but his Briggs Transport-sponsored Longhorn faded in the closing stages. But even after just missing out on a breakthrough WoO LMS victory, Briggs remained upbeat.

“Maybe I sealed my tires up or maybe I didn’t keep enough heat in them,” Briggs said while hypothesizing the cause of his late-race struggle. “But you gotta be realistic: it was Darrell and Chub and Clanton that got by me. Those guys know what they’re doing and know where to go on the racetrack. I really wanted to run third and be on that front straightaway (for victory lane interviews), but fourth to me is just awesome.”

Rick Eckert of York, Pa., advanced from 11th to finish sixth with 10th-starting Eric Wells of Hazard, Ky., taking seventh. Richards faded to eighth at the finish after running as high as second during the opening laps. He was followed by Bagley of Longview, Texas, in ninth, while Jimmy Mars of Menomonie, Wis., finished 10th after an apparent tangle on the back straightway caused him to spin from the fifth spot on lap three.

The first of the race’s two cautions appeared for Mars’ spin from the fifth spot on lap three. The lap-33 yellow appeared for the slowing machine of Farley, Iowa, driver Jason Rauen.

The NAPA Auto Parts Gopher 50 wrapped up the WoO LMS Wild West Tour. The annual trek west was scheduled to include five events in Minnesota, North Dakota, Wyoming and South Dakota. Clanton claimed the Wild West Tour opener at Hibbing on July 9, while Tim McCreadie of Watertown, N.Y., won on July 10 at River Cities Speedway in Grand Forks, N.D. Events at Gillette (Wyo.) Thunder Speedway on July 14 and Black Hills Speedway in Rapid City, S.D., on July 15 were rained out.