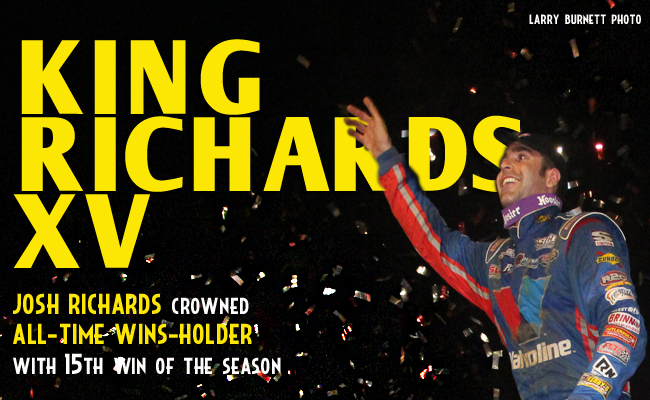 By the numbers, Richards earned his 73rd win against a stout collection of drivers at the 3/8-mile oval. The victory was his fourth consecutive win, and it marked his 15th win of the season. While Richards reclaimed the all-time wins title from Darrell Lanigan, he also has his single season wins record in his cross-hairs. Lanigan made 17 trips to victory lane in 2014.

“This one is definitely special,” said Richards, also taking home the $10,000 purse. “We could definitely lose [the record] again, but right now to be up on top is really neat. We couldn’t be more thankful for the fans giving out their support and giving us a place to race. I couldn’t ask for more.”

At the end of the 2014 season, Lanigan had 70 career A-Main victories in the series, leading the tour’s all-time wins list over Richards; Lanigan stepped away from the series in 2015. Richards, who did not compete in the series in 2012 and 2014, reentered the series last season and began to chisel away at Lanigan’s record. After a nine-win season in 2015, Richards had 15 wins to go to before reclaiming a record that was once his.

The tie-breaker came at Potomac Speedway – a track he won at in 2015. Richards’ “Rocket Man” nickname suited him well in his campaign. Richards not only recorded his seventh fast time of the season, but also his 22nd heat win in 2016. He started fourth in the 50-lap feature.

In a caution-ridden feature, Richards endured a series of battles. While York Haven, Pa. native Jason Covert made his way to the front by lap 16, Richards was constantly contested by fellow series drivers within the top five. One of his greater tasks was fending-off a strong push from defending champion Shane Clanton. Clanton passed Richards early in the race for fourth in his No. 25 Weldbank Energy/ Coopers Meat Packers Capital racecar, then proceeded to make his way to Covert; Richards rode Clanton’s rear-bumper, biding time.

Clanton managed to overtake Covert at the halfway mark of the race, and Richards swept under Covert a few laps later. The duo revisited their battle, a regular occurrence throughout the season. By lap 26, Clanton and Richards barreled down the front-stretch with first place up for grabs. Richards got the best of Clanton this time and opened-up a 1.75-second gap between them. He never looked back. On the eighth and final caution on four laps later, Covert’s strong restart with his No. 72c Mann Automotive/ Phiv-Tech Solutions Rocket car boosted him into second position. Clanton settled for third.

“You can’t give Shane or Josh an inch because they’re just too good,” said Covert, who is a two-time track champion. “I’m nowhere near their caliber so you don’t want to give them that advantage. It took a while for me to get back passed Shane. Second is no good. We’re here to win the race. I don’t care if you’re a driver or a mechanic, you want to win.”

When Richards idled to the front-stretch to celebrate his victory, he could not help but to put his career in perspective. From his first series win in 2005 to his most recent win, he said victory lane has never lost its luster. Richards has won nearly 20 percent of his races in the series.

“It’s really unreal,” Richards said. “I wanted the first one so bad. It was relief to finally get that first win, and to go from there to where we’re at now, it’s just unreal. [Racing] is all I’ve ever wanted to do, and to be championship caliber and compete for the win… it’s all I could ever ask for.”

Dirt racing has been the family mainstay for the Richards family. Josh’s father Mark Richards, a late model manufacturing guru, founded Rocket Chassis in 1991. Being born into the sport, Josh aspired to race at a young age. In different capacities, the two have impacted the sport greatly. But even in their lists of accolades, Josh’s record-breaking win was something to smile about.

“[The record] means a lot,” Mark said. “[Josh] had the record when he took the first year off, then it got away from us a little bit. Darrell had it then took this year off. It gave us a chance to get caught back up. This is what he’s worked for his whole life.”

Though Josh has the possibility to break another one of Lanigan’s records this season, his No. 1 Valvoline/ Seubert Calf Ranches team does not put an emphasis on it. Rather – and an apparent father-son similarity – Josh seeks to keep his tall-tale season away from the history books for now. When the team congregated around the car in the pits, people asked how they were going to celebrate the newest achievement. It was simply put:

“Get ready and go to the next one,” Mark said.

Both Josh and Mark take every race as it comes, with the ultimate goal of winning; the records come later. Richards will head to Winchester Speedway (Va.) next, a track he has not won at since 2011. But what makes his case stronger is the fact that he and his team have begun to gel.

“[From 2014], he just had to get back used to racing at the level we were, and we had some new guys on the team,” Mark said. “It was just a matter of everything coming together. Even last year we felt like things were coming together.”

Now, Josh is in position to potentially add his fourth series championship to his list of achievements.