Jeep Turns Back Outlaws With Home-State Win At Winston 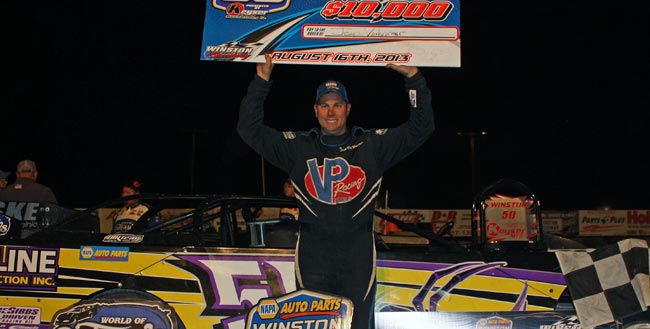 After becoming the first – and still only – driver from Michigan to win a World of Outlaws Late Model Series event on Sept. 16, 2007, at LaSalle (Ill.) Speedway, VanWormer turned up the excitement level with his second career checkered flag. The $10,000 triumph came at a track that is a three-and-a-half-hour drive across the Wolverine State from his residence.

“It felt good to go out there and perform and actually do what I always want to do – win in your home state,” said VanWormer, who became the 14th different winner in 35 events on this year’s WoO LMS. “It feels great to win in front of my home crowd. A lot of fans came out to support us.”

VanWormer, 38, steered his Dickens-powered Rocket car past 2011 WoO LMS champion Rick Eckert of York, Pa., for the lead on lap 14 and never looked back. He beat another former World of Outlaws titlist, Josh Richards of Shinnston, W.Va., to the finish line by 2.120 seconds in one of the most memorable performances of his career.

Eckert, 47, who won last year’s WoO LMS event at Winston, settled for a third-place finish after starting from the outside pole and leading laps 1-13. Mike Spatola of Manhattan, Ill., equaled his career-best WoO LMS finish with a solid fourth-place run and Tim McCreadie of Watertown, N.Y., advanced from the 14th starting spot to finish fifth.

A former DIRTcar Summer Nationals stalwart, VanWormer has cut back his racing schedule in recent years due to work commitments. Friday night’s event marked just his 13th start of the season – and first since July 23-24 at Ohio’s Eldora Speedway – but he showed no rustiness while smoothly negotiating the three-eighths-mile oval.

“We haven’t been racing a whole bunch,” said VanWormer, who emerged victorious in his first WoO LMS appearance of 2013. “Somebody made a comment to me today, ‘How am I ever gonna get good if I don’t race?’ Well, I’m not saying this happens (regularly), but we did well tonight. We had the right tires, the right car.”

VanWormer started third in the 50-lapper, but he immediately moved to second when the race began. He chased Eckert until making his winning pass by ducking to the inside exiting turn four and surging ahead as lap 14 was scored.

“We got into lapped traffic and there and (Eckert) kind of was running that middle and I just stayed down on the bottom,” said VanWormer, the fourth non-Outlaw regular to win on the tour in the last six events. “It just worked out that I had a good run coming off of four and got next to (the lapped) Rich Neiser there. I might have roughed him up a little bit, but it was for ten-grand.”

Richards came closest to threatening VanWormer, pulling up to the leader’s rear bumper shortly after the lap-16 restart. But VanWormer gradually inched away over the ensuing circuits and again after the lap-33 caution period.

“I was keeping my tires warm – and the car was just so good honestly,” said VanWormer, whose only previous feature win this season also came at Winston in an American Late Model Series event on April 27. “We were just making smooth laps and not spinning our tires.”

Richards conceded that VanWormer was the class of Friday night’s field. The young superstar had to satisfy himself with a runner-up finish that pushed his lead in the WoO LMS standings to 58 points over Shane Clanton of Zebulon, Ga., who finished seventh, and 72 points over defending champion Darrell Lanigan of Union, Ky., who placed sixth.

“He was good,” Richards said of VanWormer. “On that (lap-16) restart we fired off that middle (groove) real well and stayed with him for a few laps. I couldn’t keep running there, though. Me and Eckert were talking after the race about how you could run four or five laps good there, and then the tires would get greasy and you couldn’t move around as much.

“Jeep was really good on the long greens. His car was just rolling through the corners so well.”

Bub McCool of Vicksburg, Miss., finished eighth, steadily moving forward from the 19th starting spot. Brady Smith of Solon Springs, Wis., slipped to a ninth-place finish after running in the top five for most of the race’s first half and Chub Frank of Bear Lake, Pa., faded to 10th at the finish after starting from the pole position.

Twenty-six cars were entered in the event, which was run on a clear and refreshingly cool summer day.

Heat winners were Frank, Eckert and Brady Smith, and McCool captured the B-Main.

The WoO LMS will conclude its Michigan doubleheader on Saturday night (Aug. 17) at Merritt Speedway in Lake City, which hosts the $10,000-to-win NAPA Auto Parts Merritt 50 Presented by Allstar Performance.

MONTAGUE, MI – Aug. 16, 2013 – The World of Outlaws Late Model Series kicks off a doubleheader weekend in the Wolverine State tonight with a visit to Winston Speedway, a three-eighths-mile clay oval near the eastern shore of Lake Michigan.

10:10 p.m. – Jeep VanWormer gave his home-state fans a reason to party with a convincing victory in the NAPA Auto Parts Winston 50 Presented by Keyser Manufacturing.

VanWormer passed Rick Eckert for the lead on lap 14 and never looked back. He beat Josh Richards to the finish line by 2.120 seconds for his second career WoO LMS triumph.

After becoming the first — and still only — driver from Michigan to win a WoO LMS event on Sept. 16, 2007, at LaSalle (Ill.) Speedway, VanWormer turned up the excitement level with his second checkered flag. It came at a track that is just over a three-hour drive across the state from his home.

8:45 p.m. – Chub Frank couldn’t be better positioned to make a run at his first WoO LMS victory in almost exactly four years. He drew the pole starting spot for the NAPA 50 by Keyser.

Rick Eckert will take the green flag from the outside pole as he bids to win Winston’s WoO LMS event for the second consecutive year.

A short intermission is now taking place with the track’s Street Stock feature to follow. The WoO LMS A-Main will roll onto the speedway after the checkered flag flies in the stocker event.

8:05 p.m. – Chub Frank, Rick Eckert and Brady Smith were victorious in the three 10-lap heat races…. Frank used the inside groove to bolt forward from the third starting spot and take the lead on the opening lap of the first heat. He beat fast-timer Mike Spatola to the finish line by just over a half-second…. Eckert, who won last year’s WoO LMS A-Main at Winston, turned the fastest lap of the heat winners (14.945 seconds) and had the largest margin of victory (1.632 seconds)…. Darrell Lanigan broke into third place in the second heat race with a couple circuits remaining…. Brady Smith’s triumph in the third heat came with Jeep VanWormer drawing closer to him in the final laps….

Complete results from the heat races can be found here.

7:15 p.m. – Mike Spatola of Manhattan, Ill., was quickest during Ohlins Shocks Time Trials, recording his first-ever WoO LMS fast-time honor with a lap of 14.182 seconds. The young talent does have two career heat-race wins on the tour, however.

5:55 p.m. – With tonight’s drivers’ meeting just moments away, 26 cars are signed in for action. Among the Michigan drivers who have joined the field in the last hour are Jeep VanWormer (the only racer from the Wolverine State to ever win a WoO LMS A-Main), Brandon Thirlby, Rich Neiser, Dona Marcullier and Tom Sprague Jr., whose father, Tom Sr., promotes Winston Speedway. Canadian Andrew Reaume, who in June scored his first-ever WoO LMS fast-time award and heat-race win, is also ready for action.

Back behind the mic

5:40 p.m. – One week after being inducted into the National Dirt Late Model Hall of Fame as an Outstanding Contributor to the Sport, WoO LMS race director Bret Emrick is taking on a different — albeit familiar — role during this weekend’s doubleheader.

Tonight and tomorrow at Merritt Speedway Emrick will put down the RaceCeiver radio he customarily uses to communicate with drivers during WoO LMS events and pick up a microphone instead. The Ohio native will serve as the WoO LMS announcer this weekend, returning him to his announcing roots for the first time since he ended his stint as one of the voices of Eldora Speedway’s World 100 in 2010.

5 p.m. – You couldn’t ask for a better summer day in western Michigan than the one that has greeted the WoO LMS teams today. Just some puffy white clouds are floating around a brilliantly blue sky and temperatures are in the 70s.

Haulers continue to roll into the Winston pit area, but already unloaded are the 11 WoO LMS regulars plus such challengers as Brady Smith, Jason Feger, Mike Spatola and Michigan’s Ryan VanderVeen.