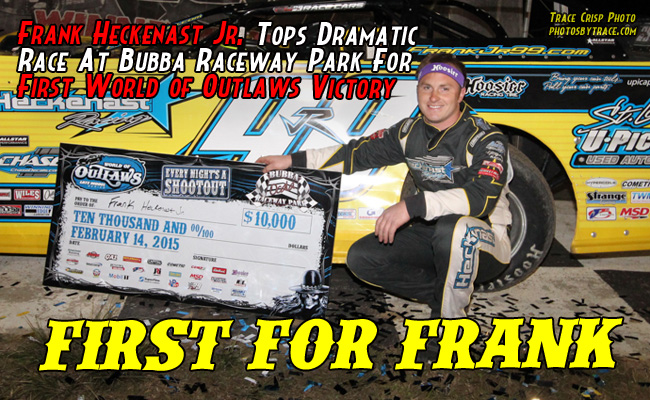 The second-year national traveler nearly saw another chance at his breakthrough World of Outlaws Late Model Series victory slip through his fingers Saturday night at Bubba Raceway Park when Shane Clanton snuck by him late in the 3/8-mile oval’s 50-lap race. But instead of settling for another near-miss, Heckenast, 26, of Frankfort, Ill., dug deep and willed himself back to the lead one lap later.

The 2014 WoO LMS Rookie of the Year held off both Clanton of Zebulon, Ga., and hard-charging Josh Richards of Shinnston, W.Va., through the race’s final eight laps to earn $10,550 for his first career WoO LMS victory during the second round of the Bubba Army Winter Nationals.

“When Shane passed me, reality started to set in and I told myself I wasn’t letting another one get taken from me,” said Heckenast, who joined Steve Casebolt of Richmond, Ind., as the second first-time WoO LMS winner this season. “That next lap I just got up on the wheel and settled down and didn’t get all flustered. I got beside him and drag-raced him off the corner and got ahead of him. I just did my best to drive a straight race the rest of the way.”

Heckenast’s Club 29 Race Car crossed the finish line 0.766 seconds ahead of Clanton’s Capital Race Cars house car. Richards was third after catching the top two cars late in the race only for his Rocket Chassis house car to slip over the cushion just after edging ahead of Clanton for second on lap 48.

Defending series champion Darrell Lanigan of Union, Ky., recovered from an early spin in his Club 29 house car to finish fourth, while the Longhorn Chassis of early leader Chub Frank of Bear Lake, Pa., rounded out the top five in a dramatic race that featured five lead changes and side-by-side racing near the front throughout its entirety.

For Heckenast, the hard-fought victory cements his status as a bonafide WoO LMS contender. After a seventh-place points finish on last year’s WoO LMS, Saturday’s strong performance now has Heckenast aiming much higher during his sophomore season.

“I feel like we belong here now,” said Heckenast, whose No. 99JR machine carries sponsorship from St. Louis U-Pic-A-Part and Storage Squares. “Last year the rookie thing was beating me up pretty bad and I didn’t have a whole lot of confidence. But in the second half of the year we were getting better and better and really just started putting everything together.

“I knew we could win a race this year, but I didn’t want to have to wait until November to see if we could do it. Now that we’ve got it out of the way, I feel like we can win even more and have a really good chance at a good points finish this year.”

The race was intense from the very beginning for Heckenast, who quickly charged forward from his fifth starting spot to challenge the teammates of Frank and Boom Briggs of Bear Lake, Pa., in a tight three-car battle through the race’s early laps. Heckenast first edged into the lead at the completion of lap six, but he couldn’t quite clear the veteran Frank, who was looking to end his nearly six-year WoO LMS winless streak.

Frank roared back ahead on lap eight and only narrowly held command with Heckenast and Briggs on his heels before a lap-11 caution slowed the lead battle. Heckenast took advantage of the restart, pulling alongside Frank through turns one and two on lap 12 before finally clearing him for the lead on lap 13.

Heckenast maintained a slight advantage through the race’s middle portions while Clanton and Richards made their way forward. Richards took the second spot from Frank on lap 27 with Clanton following into third on the next lap. After overtaking Richards for second on lap 36, Clanton began to cut away at Heckenast’s nearly straightaway advantage.

With Heckenast struggling in traffic, Clanton began to challenge for the lead by lap 40 and pulled ahead with a low-side pass in turns one and two on lap 41. A slight misstep by Clanton in turns three and four on the same lap allowed Heckenast to pull back alongside. He completed the winning move with a bottom-line pass of his own on lap 42.

Heckenast’s bold recovery denied Clanton his second straight WoO LMS victory after he snapped his 66-race winless streak with a dramatic triumph of his own during the tour’s Feb. 7 event at Screven Motor Speedway in Sylvania, Ga. The runner-up performance continues Clanton’s return to form following a dismal 2014 campaign that saw the WoO LMS veteran go winless on the tour for the first time since the series was restarted in 2004.

“I thought I was going to (win),” said Clanton, who took over the series points lead and is the only driver to finish among the top five in all three of this season’s WoO LMS A-Mains. “I just messed up in three and four and Frankie’s car was good enough to take advantage of my misfortune. But overall a good night. We started seventh, and to get to second was pretty good.

“We got our ducks in a row right now. Hopefully we can keep them in a row and get a good points lead here. We’re optimistic for a good year.”

Polesitter Brandon Overton of Evans, Ga., was never a factor after jumping the cushion on the race’s opening lap. But he recovered to score a sixth-place finish, continuing his solid start to the season that saw the regional standout finish among the top three of both WoO LMS A-Mains at Screven.

Morgan Bagley of Longview, Texas, advanced from his 18th starting spot to finish seventh, while Briggs faded back to eighth after running among the top three through the race’s first 20 laps. Chase Junghans of Manhattan, Kan., finished ninth and rookie competitor Jordan Yaggy of Rochester, Minn., notched his first career WoO LMS top-10 finish in the 10th position.

The race was slowed by two cautions with the first appearing for Lanigan’s spin on lap four. Tim McCreadie of Watertown, N.Y., slowed to cause the final caution with 11 laps complete.

The fourth annual Bubba Army Winter Nationals conclude on Sunday with another $10,000-to-win WoO LMS program. Action gets underway with hot laps at 5 p.m. followed by a complete slate of time trials, heat races, B-mains and another 50-lap A-Main.