Eckert Breaks Through For First Of ’13 At Gillette 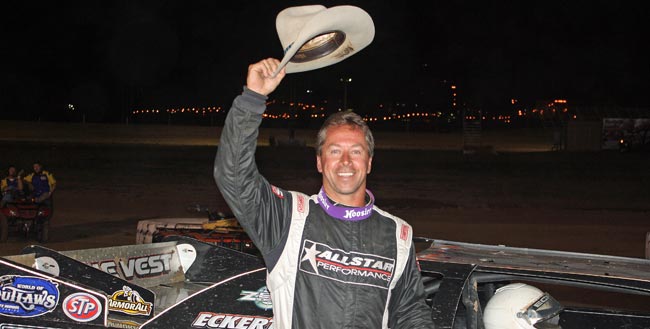 The 47-year-old star from York, Pa., broke into Victory Lane for the first time this season on the national circuit, passing defending series champion Darrell Lanigan of Union, Ky., for the top spot on lap 18 and then holding on to capture the Wild West Tour’s ‘Cowboy 40.’

After registering four runner-up finishes in 2013 without grabbing a checkered flag, Eckert was excited to at long last bag his milestone 30th career win on the WoO LMS. His last victory came on Oct. 10, 2012, at The Dirt Track at Charlotte in Concord, N.C.

“We’ve been so close so many times this year and haven’t got it done,” said Eckert, who ranks third on the alltime WoO LMS win list. “You come to win every race, and when you don’t get it done for like 27 races (entering Tuesday night’s action) it’s not very good on your morale or your team. They’ve worked very hard to try and get us a win, they’ve done their job – and I just haven’t got my job done.

“Finally tonight we had all the pieces together and got the job done. Hopefully there will be some more to come.”

Lanigan, 43, started from the pole position and led laps 1-17, but he had to settle for second place after being unable to regain command from Eckert. The circuit’s winningest driver this season fell short in his bid for two straight victories on the Wild West Tour, crossing the finish line 0.884 of a second behind Eckert.

Clint Smith of Senoia, Ga., marched forward from the ninth starting spot to finish a strong third, nearly five seconds behind Eckert. Seventh-starter Jimmy Mars of Menomonie, Wis., placed fourth after climbing as high as third early in the distance and WoO LMS rookie Eric Wells of Hazard, Ky., who started 11th, slipped into fifth place in the final laps and finished there for his second consecutive top-five outing.

Eckert, who earned $8,700, started third in his self-owned Team Zero by Bloomquist car – a welcomed position for the green flag after he picked the worst starting spot possible in the feature redraw at the first two events on the Wild West Tour. He immediately snatched second place when the race began and chased Lanigan’s Rocket machine until surging by for the lead off the inside of turn four on lap 18.

“He got to rolling that middle (lane) in (turns) one and two and I just got to him,” Eckert said of his pursuit of Lanigan. “It got a slippery spot out and in (the corners), and there was one spot of brown through the middle – and that was the key thing. I just started aiming for those brown spots, and as it got more technical it got more into my favor.

“I think (Lanigan) was a little too tight to hit the brown spots. He ran a good wide, hustle line, but he couldn’t cross back to the brown spots like I could.”

Eckert’s pace was slowed by just one caution flag once he gained command, on lap 25 when David Karst of Casper, Wyo., spun into an inside marker tire in turn two just a short distance in front of Eckert. He handled the restart and smoothly negotiated lapped traffic down the stretch to become the 10th different WoO LMS A-Main winner this season.

Lanigan, who won the 2009 WoO LMS event at the one-third-mile Gillette oval, felt he let a golden opportunity to score his eighth win of the season slip through his fingers.

“I just gave him the bottom (groove),” said Lanigan. “It’s my own fault. When we were lapping cars (early) we were running a groove in the middle and coming off the bottom and I thought we were pretty good, but it was definitely better around the very bottom.”

Smith, 48, briefly challenged Lanigan for second on the lap-25 restart before settling into the third position for the remainder of the distance. It was just the second top-five finish of the season for ‘Cat Daddy,’ who reached third place on a lap-16 restart following a caution flag for a blown right-rear tire on the car driven by Chub Frank of Bear Lake, Pa.

“My car was good,” Smith said of his Rocket mount. “We’ve been working hard and again Lanigan helped me with some setup tips. We’re making up ground – and if I can get my motor program straightened out a little bit better, I think we got something to compete. I had my RaceTek 412 (engine) back in tonight and it’s good on these short tracks, but we need a little more for the big tracks.”

Tim McCreadie of Watertown, N.Y., started and finished sixth, but he had to rally after slipping out of the top 10 on the opening lap when he took evasive action between turns one and two to avoid the sideways Shane Clanton of Zebulon, Ga. Clanton, who started fourth, maintained control of his car and spent much of the distance running in fifth before settling for a seventh-place finish.

Finishing in positions 8-10 was rookie Morgan Bagley of Longview, Texas, who survived a slide over the backstretch berm on lap four; fifth-starter Josh Richards of Shinnston, W.Va., whose points lead shrank to 30 points over Clanton and 32 over Lanigan; and Brady Smith of Solon Springs, Wis.

Ohlins Shocks Time Trials were split into ‘A’ and ‘B’ groups, with the first half competing for starting positions in heats one and two and the second half racing against the clock to align heats three and four.

Lanigan’s lap of 13.641 seconds during Group ‘B’ was the quickest overall, earning him not only his fourth WoO LMS fast-time honor of 2013 – tying him with Richards for the lead in the category – but also a new track record. He bested the standard of 13.971 seconds set by Doar in 2009.

Heat winners were Clanton, Bagley, Lanigan and Doar. The B-Mains were captured by Scott Lewis of Henderson, Colo., and Tim Fuller of Watertown, N.Y.

The WoO LMS Wild West Tour will be idle on Wednesday for teams to travel to the swing-ending doubleheader on Thursday night (July 11) at Red River Co-op Speedway in Winnipeg, Manitoba, and Friday night (July 12) at River Cities Speedway in Grand Forks, N.D.

After a rainout last night at Black Hills Speedway in Rapid City, S.D., the WoO LMS hits the one-third-mile Gillette oval for the first time in two years. The series will run for the fourth time at the eastern Wyoming track; previous winners were Tim Fuller (2008), Darrell Lanigan (2009) and Shane Clanton (2011).

Eckert passed polesitter and race-long pacesetter Darrell Lanigan for the lead on lap 18 and never looked back. He smoothly negotiated lapped traffic late in the distance to keep Lanigan at bay.

10:20 p.m. MT –The twin 12-lap B-Mains spun off quickly with Scott Lewis defeating Scott Anderson and Mike Stadel in the first and Tim Fuller outdistanced John Mason and Dan Henrickson in the second.

A 20-lap B-Modified feature will be heading out momentarily and then the WoO LMS ‘Cowboy 40’ will hit the racetrack.

9:55 p.m. MT – Shane Clanton, Morgan Bagley, Darrell Lanigan and Pat Doar were victorious in the four 10-lap heat races, which were slowed by just a single caution (during heat four)…. Clanton was the most dominant winner, capturing the first prelim by 3.641 seconds over Rick Eckert…. After winning his first-ever WoO LMS heat race on Saturday night at Deer Creek Speedway in Spring Valley, Minn., Morgan Bagley made it two in-a-row with a score in heat two…. Eddie Kirchoff was a scratch from the fourth heat after busting a water pump during time trials. His crew is working on the car in hopes of getting him out for the second B-Main…. Lanigan drew the pole position for the second consecutive WoO LMS A-Main. He will share the front row with 2011 tour Rookie of the Year Pat Doar, who has enjoyed success at Gillette in WISSOTA spec-engine competition in the past….

Darrell’s on the gas

8:55 p.m. MT – Darrell Lanigan was the overall quickest qualifier in Ohlins Shocks Time Trials, establishing a new track record with his lap of 13.641 seconds in Group ‘B.’ He topped the existed one-lap standard of 13.971 seconds set by Pat Doar in the 2009 WoO LMS event.

Shane Clanton led the Group ‘A’ qualifying session with a lap of 13.708 seconds.

Four 10-lap heat races will hit the track shortly. The top-four finishers from each will transfer to the A-Main, with the top-two redrawing for the first four rows in the headliner.

Ohlins Shocks Time Trials are now on the track. Qualifying is being split into ‘A’ and ‘B’ groups, with the first half competing for positions in heats one and two and the second half going for spots in heats three and four.

5:55 p.m. MT – The top hometown hope for an upset victory in tonight’s Cowboy 40, Gillette’s Eddie Kirchoff, has some extra incentive to turn back the World of Outlaws invaders. He’ll be racing as his wife sits on the verge of giving birth to the couple’s third child.

“I’m gonna try to win one for the baby,” smiled Kirchoff, who wouldn’t be surprised if he got a call tonight with news that his wife is going into labor — though he obviously would like that to come after the racing program is completed.

One of the biggest dirt Late Model stars in the Rocky Mountain region, Kirchoff has earned up-front starting spots in the three previous WoO LMS events at Gillette (sixth in ’08, fifth in ’09, 10th in ’09), but he wasn’t a factor in any of the A-Mains. He picked the wrong tire compound in ’08 and finished 15th; in ’09 he faded immediately after the green flag was thrown due to a “tight” setup and was credited with a 24th-place finish after he retired because his car’s front end was damaged in a tangle; and in ’11 he finished one lap down in 16th after starting his night by turning the second-fastest lap in time trials and then later spinning to bring out a caution flag on lap six of the feature.

5:45 p.m. MT – After last night’s frustrating rain at Black Hills Speedway, WoO LMS teams have been greeted with absolutely perfect weather here at Gillette. Temperatures are in the 80s under sunny skies — and forecasts list no chance of rain.