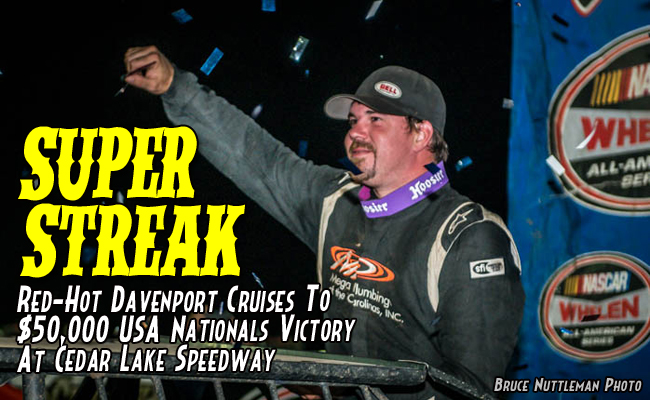 Davenport, whose stellar 2015 campaign already included a $100,000 payday at Eldora Speedway’s Dirt Late Model Dream and a $26,000 Prairie Dirt Classic triumph at Fairbury American Legion Speedway just one week ago, overtook Dennis Erb Jr. of Carpentersville, Ill., on lap 23 of Saturday’s 100-lap race and pulled away from Billy Moyer of Batesville, Ark., in the closing laps on his way to his first USA Nationals victory.

The 31-year-old Davenport drove his Kevin and Lee Roy Rumley-owned Longhorn Chassis to his 16th overall victory of the season and his third of the year on the WoO LMS.

Like he has been for most of the season, Davenport was nearly untouchable in Saturday’s race. Starting from the sixth position, he charged to third on the opening lap to settle in behind Erb and Moyer. Davenport overtook Moyer for second on a lap-15 restart and powered around the outside of Erb to take the lead exiting turn two on lap 23.

Davenport was in control from there, running virtually unchallenged until heavy traffic slowed his pace and allowed Moyer to close the gap around lap 70. But Davenport found his groove through traffic by lap 85 and kept a slower car between him and Moyer for the final 15 laps on his way to winning by a margin of 1.618 seconds.

“We took off really good and got to third,” Davenport said. “I just kind of rode there through a couple cautions because I wanted the fuel load to burn off a little bit so I didn’t lay over on the right rear too much and hurt the tire. I just waited for that to burn off a little bit, then picked the pace up and tried to get to the lead.

“It was kind of hairy there at the end. I saw everybody was in the bottom, but then saw a couple lapped cars moving up, so I thought I’d better get up in a hurry. I had to slide one lapped car because I wanted to at least get one lapped car between us just so I’d have a little cushion.”

Moyer settled for the runner-up finish in his self-designed Victory Race Car while Erb took third in his Black Diamond Chassis. Defending USA Nationals winner Jimmy Owens of Newport, Tenn., finished fourth in a Club 29 Race Car with Chase Junghans of Manhattan, Kan., rounding out the top five in a Capital machine.

Remarkably, Davenport’s stellar weekend at Cedar Lake nearly didn’t happen. After his July 25 victory at Fairbury, Davenport, who currently leads the Lucas Oil Late Model Dirt Series points standings, initially planned to take the USA Nationals weekend off in order to spend time at home with family before tackling a busy late-summer and early-fall stretch of racing. But after rethinking the situation, Davenport and the Rumley team decided to make the trip after all.

“I really wanted to come the whole time, but we just don’t get many breaks to spend time with our families,” Davenport said. “But I told Kevin (Rumley), once you get on a roll like we are, you just gotta stay with it. I know our families sacrifice with us not being there. We all hate that, but this is what we do for a living, and you gotta get it while you can.”

After dominating Friday’s preliminary action and earning the pole for Saturday’s feature, Moyer, 57, felt good about his chances of scoring his long-awaited sixth USA Nationals victory. But after leading only the first lap before getting passed by Erb, Moyer was never able to regain the lead in settling for his third-career runner-up finish in the event.

“He was better than us,” Moyer said of Davenport’s performance. “We gave it a whirl and gave it all we had, but we came up a little short. The outside came in there for a short little span where you could really rock on that outside, but it went away real quick and there wasn’t much we could do after that.”

Erb was disappointed not to secure his first crown jewel victory after leading laps 2 through 22. But the 42-year-old racer was pleased to bring home another solid finish in a major event.

“We had a pretty good car and we’re happy with third,” said Erb, who finished second behind Davenport at Fairbury’s Prairie Dirt Classic after Davenport muscled his way by on the final lap. “I just slipped up a little bit and Billy got by me or else I think we would’ve at least been second again. But we fell back in line and that was about all we had there.”

The race was slowed by four cautions. Bobby Pierce of Oakwood, Ill., brought out the first yellow flag when he slowed on lap two. Chub Frank of Bear Lake, Pa., jumped the turn-three cushion and slapped the wall to cause a lap-15 caution, and Chris Simpson of Oxford, Iowa, stopped on the front straightaway on lap 49 to cause the third yellow. The final caution appeared with 55 laps complete to allow the ambulance to cross from the infield to the pit area.

Frank Heckenast Jr. of Frankfort, Ill., advanced from the 10th starting spot to finish sixth, while 14th-starting Shannon Babb of Moweaqua, Ill., finished seventh after climbing as high as fourth during the race’s middle portions. Jason Feger of Bloomington, Ill., finished eighth with A.J. Diemel of Elk Mound, Wis., and Mike Marlar of Winfield, Tenn., rounding out the top 10.

The three-day weekend drew a total of 48 Super Late Models to Cedar Lake, with 47 competing in Friday and Saturday’s action. During preliminary action on Friday, Mitch McGrath of Waukesha, Wis., was the fastest qualifier, while Moyer, Erb, Feger, Owens and Junghans won the heat races. Last Chance Showdowns on Saturday were won by Eric Wells of Hazard, Ky., and Rodney Sanders of Happy, Texas. Jimmy Mars of Menomonie, Wis., won the Last-Chance Qualifier.

The World of Outlaws Late Model Series takes the upcoming weekend off before returning to action with a Mid-Atlantic tripleheader Aug. 13-14. The national tour visits Delaware International Speedway in Delmar, Del., on Thurs., Aug. 13, Potomac Speedway in Budds Creek, Md., on Fri., Aug. 14 and Winchester (Va.) Speedway on Sat., Aug. 15.