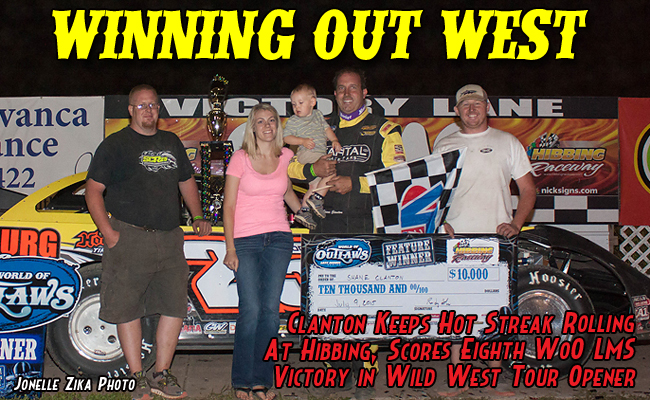 HIBBING, Minn. – July 9, 2015 – Shane Clanton’s hot streak rolled on Thursday night at Hibbing Raceway, where the World of Outlaws Late Model Series points leader scored his eighth series victory of the season with a dominating performance in the opening round of the five-race Wild West Tour.

Clanton, 39, of Zebulon, Ga., led every lap of Thursday’s 50-lap event, which was sponsored by Beltline Body Shop and Northern Belt and Conveyer, to earn a $10,575 payday. The WoO LMS veteran overcame a poor qualifying effort to win the night’s fourth heat race from the fifth starting spot before drawing the pole in the redraw among heat race winners and runners-up.

Mastering a dominant low line around the 3/8-mile oval, Clanton pulled away before heavy traffic allowed Morgan Bagley of Longview, Texas, to close the gap as the race neared its halfway point. But a lap-26 caution gave Clanton clear track ahead, and he cruised to his fourth victory in the past six WoO LMS events.

“This car is phenomenal,” Clanton said of his Weldbank Energy-sponsored Capital Race Cars house car. “I screwed up qualifying and dug myself a hole. But we dug back out of it and got a little lucky to (draw the pole). That was crucial tonight.

“Running down around them (infield) tires, you slow it down so much, but if you slide just a little bit you get into them guys. I just bided my time making sure I hit my marks and left the corner in the bottom.”

Clanton crossed the finish line 3.864 seconds ahead of fifth-starting Josh Richards of Shinnston, W.Va., who battled his way by Bagley late in the race to score the runner-up finish. Bagley settled for third with Chub Frank of Bear Lake, Pa., and Frank Heckenast Jr. of Frankfort, Ill., rounding out the race’s top five finishers.

Clanton’s victory marked his eighth consecutive WoO LMS finish of third or better and continued his career-best season on the national tour. With his points lead stretched to 190 points over Richards, Clanton is in prime position to score his first ever WoO LMS championship as the series heads into the second half of the season.

“We’re just going to keep doing what we’re doing and hopefully things keep rolling in this same direction,” said Clanton, who with his 28th-career WoO LMS victory moved into a three-way tie with Steve Francis and Tim McCreadie for fourth on the tour’s modern-era wins list. “Our car’s real good right now and it just shows how hard we worked over the winter to get what we got. It’s just been phenomenal all year long. I really can’t believe it.”

Although he lost ground to Clanton in the points chase, Richards’ runner-up finish moved him back ahead of 14th-finishing Darrell Lanigan of Union, Ky., for second in the current WoO LMS standings. After a string of poor luck, Richards was pleased to finally have a result reflecting the strong performance of his Valvoline-sponsored Rocket Chassis house car.

“We had a good car, but we just had to be patient and creep around that bottom,” said Richards, who made his first-ever appearance at Hibbing. “I’m glad we ended up second. Shane’s been on a roll this year. He’s had a lot of luck go his way and he’s been really good.

“We’ve been really good lately too, just had some bad luck roll our way. But it feels good to come home second.”

Looking for his first-career WoO LMS victory, Bagley closed in on Clanton in traffic, only to fade as his car suffered fuel pickup problems in the race’s closing laps. In holding on to finish third, Bagley notched his fourth top-five finish of the season.

“I knew I had to be killing them behind me, but you can’t just move out of the way for them,” Bagley said. “I appreciate Josh racing me clean. I know I was holding him up.”

The race was slowed by two cautions. The first appeared on the opening lap when Boom Briggs of Bear Lake, Pa., tangled with Dave Fieber of Chippewa Falls, Wis. The second caution on lap 26 was caused by a tangle between Harry Hanson of Eveleth, Minn., and Zach Wohlers of Kelly Lake, Minn., back in the pack.

Donny Schatz of Fargo, N.D., a six-time champion on the World of Outlaws Sprint Car Series who fields a Late Model in select events, was slated to start Thursday’s race from the 19th position before dropping a driveshaft during the pace laps. He plans to compete in the Wild West Tour’s second round event Friday night at River Cities Speedway in Grand Rapids, S.D.

Friday’s WoO LMS Wild West Tour program at River Cities gets under way with hot laps at 6:30 p.m. and racing at 7. The tour moves to Gillette (Wyo.) Thunder Speedway on Tues., July 14 and Black Hills Speedway in Rapid City, S.D., on Wed., July 15 before wrapping up at Deer Creek Speedway in Spring Valley, Minn., on Sat., July 18.