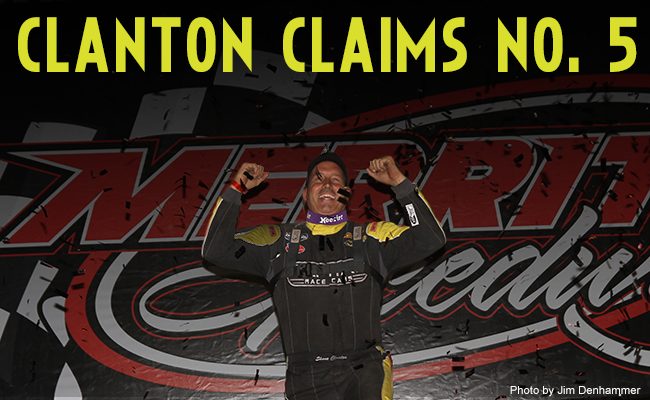 The Series Veteran from Zebulon, Ga. waited for just the right time to make his move on race long leader and friend, Chris “Smokey” Madden. The perfect time just so happened to be on the very last lap of the Craftsman Club Feature as the pair exited turn two on the 3/8-mile.

“Me and Chris have been driving up and down the road together and he’s been at my father-in-law’s [Ron Davies] the last week, so when you can race your buddies as clean as we did, and as fun as it was, it’s a good deal,” said Clanton.

Madden held a solid one-second lead over Clanton and the field for most of the 30-lap event. His steady lead was wiped clean with nine laps to go after a caution fell for Chub Frank, who was running third at the time, as he spun around in turn two.

Headed back to green in a single-file restart, Madden led the way in front of Clanton, Devin Moran, Brandon Sheppard, and Morgan Bagley. With the wave of the green flag, Madden hugged to the bottom of the racetrack and Clanton continued to run on the topside. Madden defended his lead from the “Georgia-Bulldog” but with two laps to go only 0.349 stood between the pair. Clanton was able to make the pass for the lead on lap 29 of the 30-lap feature. The pair, whom were both looking for their fifth win of the season, only finished 0.182 seconds apart.

“I guess I just sat on the bottom too long and was a sitting duck there,” said Madden. “Obviously he knew where he needed to be, not to run second. He had the preferred choice of the line he needed to make the pass there. We just came up one lap short.”

The Series has visited Merritt Speedway six times since 2011, yet Saturday night’s victory was a first for Clanton on the 3/8-mile track. His best finish prior was back-to-back fifth place runs during the 2016 edition of the Keyser Manufacturing Great Lakes Shootout two-day show.

Madden, of Gray Court, S.C., settled for a second-place finish during his first ever appearance at Merritt Speedway. His lack of experience at the Michigan dirt track may have been his biggest hindrance during the final laps of the race.

“Madden gave me the whole outside there and you can’t see no signals here,” said Clanton. “He’s never been here and so he didn’t know you could get a run off the top of the racetrack on the front straightaway and the back straightaway here. So that helped me get the win here… Hated he had to lose on the last lap there but I’m glad I did.”

World of Outlaws Craftsman Late Model Series Rookie of the Year Contender, Moran, rounded out the podium at Merritt Speedway. Saturday night’s event was the young gun’s first visit to the 3/8-mile as well.

“We will definitely take a top three at a place we’ve never been to,” said Moran. “A track that seems to be pretty tricky for most people so I’m happy to come out of here with a podium finish and hopefully we can just be a little better tomorrow.”

With one-race down at Merritt Speedway, Madden and Moran will surely be looking to find their way to Victory Lane on Sunday night after the Keyser Manufacturing 75. Racing tomorrow will begin with hot laps starting at 5 p.m. Tune in to all of the World of Outlaws Craftsman Late Model Series action live for free on dirtvision.com.

Although Chub Frank did not come to a complete stop on the track after spinning around on lap 21, he had a right-front flat which sent him to the pits and thus to the tail of the field, surrendering his third-place position. He finished 19th by the time the checkers fell.

Tyler Erb gained the most positions during the 30-lap event. The New Waverly, Texas-native charged to 12th from a 23rd position start.

Hometown hero, Eric Spangler, made his way into the top-ten from an 18th starting spot in the feature; finishing eighth. He transferred in to the 30-lap event after winning the second of two Last Chance Showdowns. During the 2016 edition of the Outlaws at Merritt Speedway, Spangler claimed the checkers on the first night of two shootouts.

Eric Wells settled for a 15th place finish after a rough start to his day at Merritt Speedway. Wells had engine troubles during hot laps which forced the Wells Motorsports crew to unload their backup car. He then missed qualifying which would have him start from the tail of his heat. Wells finished an impressive fourth in his heat from a ninth position start which transferred him into the 30-lap event.