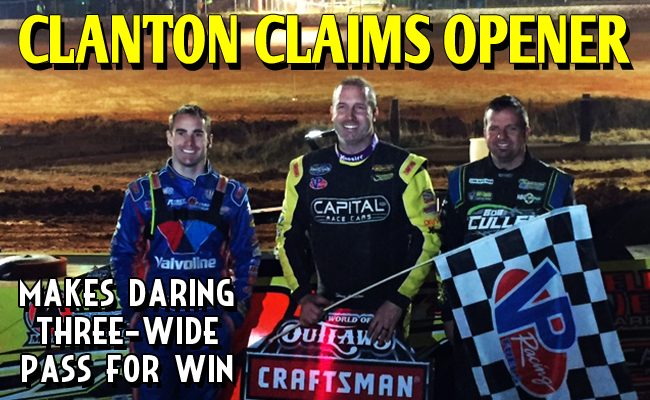 Clanton started from the sixth position but made quick work powering his way into the top three. Richards, who is in the midst of a hot streak, drew the pole-positon after winning his heat race earlier in the night.

Richards led just two laps before second place starter Covert battled past. Covert controlled the field for the first half of the race but could never pull away from Richards and eventually a hard-charging Clanton.

Clanton saw an opening in turn four on lap 15 when Richards pulled even with Covert for the lead. Clanton rocketed his car to the outside of the leaders, creating a three-wide drag race for the lead as they approached lapped traffic.

Clanton, a native of Zebulon, Ga., completed the pass in turn one on the following lap, with Richards settling into second. Richards stayed glued to Clanton’s back bumper, taking shots at the leader on multiple occasions but Clanton held on to the lead and dominated the remaining laps, winning the opening night of Winter Freeze VI at Screven Motor Speedway.

“It was a phenomenal race,” Clanton said. “Sometimes it sucks being the leader and catching that many lapped cars going two and three-wide. Covert didn’t know to run the top [line] because he has never been here before, but you can lean on that top.

“The experience being around this place as much as I have really helps out. It boosts our confidence to come in here and win and beat the hottest guy in the pit area. Josh [Richards] hasn’t finished outside the top three yet this year, but to be able to beat him and outrun him on the first night we have raced against him this year, that feels pretty good.”

Richards settled for second after challenging for the lead all night, which is an improvement on his results from this race last year in which he finished fourth.

“We had a great car, we definitely had a car good enough to win,” the Shinnston, W.Va. native said. “We were following Covert there and got jammed up in lapped traffic and got stuck on the bottom.

“Clanton got a good run and got around us, then after that it was going to be hard to get back in front of him. I feel like at the end of the race we were better than him, but the way the lapped traffic played out it was hard to get back up there.”

Action continues at Screven tomorrow night as Clanton looks to go back-to-back early in 2016 and repeat as winner of night two of Winter Freeze VI.

Racing starts at 5 p.m. on Saturday at Screven. Tickets for Winter Freeze VI at Screven Motor Speedway are $40 on Saturday, with kids under 12 admitted for free. All tickets are a pit pass with free parking. To find out more information, visit www.ScrevenMotorsports.com.