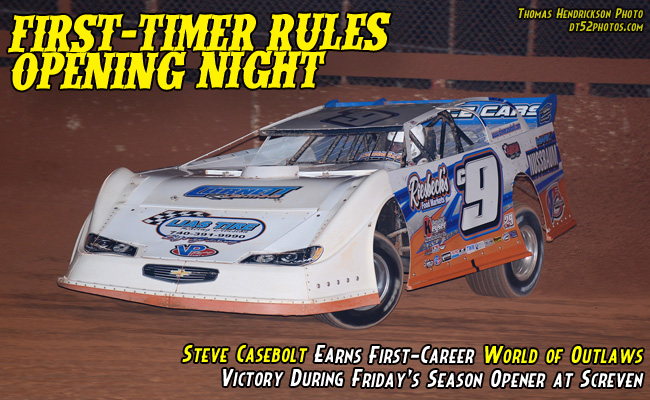 Casebolt, 36, of Richmond, Ind., overtook Brandon Overton of Evans, Ga., on lap 44 of Friday’s 50-lap Winter Freeze A-Main at Screven’s 3/8-mile oval and turned back Overton’s last-ditched effort to retake the lead in the closing laps. The former Eldora Dream winner earned $10,600 in just his second start behind the wheel of a Club 29 Race Car for new car owner Tye Twarog.

“We started this new team kinda on a whim late last year,” said Casebolt, who recently announced his partnership with Twarog during December’s Performance Racing Industry trade show. “This is unbelievable. I’m thrilled and just couldn’t be any happier. Everything turned out great.”

Overton settled for the runner-up spot, falling just shy of claiming his own breakthrough WoO LMS victory after leading the race’s first 43 laps. He was followed by a pair of three-time WoO LMS champions in third-finishing Billy Moyer of Batesville, Ark., and fourth-place Josh Richards of Shinnston, W.Va. Shane Clanton of Zebulon, Ga., rounded out the top five finishers in a race slowed by five cautions.

The yellow flags made things difficult for the race winner. After starting to Overton’s outside on the front row, Casebolt appeared to have the quicker car for much of the race, but multiple cautions spoiled his challenges.

Casebolt’s first serious bid for the lead came just after the lap-20 mark when he began to look under Overton as the two leaders entered lapped traffic. The two cars were side by side on lap 24 when the race’s fourth caution waved and thwarted Casebolt’s strong run.

Overton edged away from Casebolt in the initial laps following the restart, but Casebolt was again looking under the leader before the race’s final caution on lap 31 again slowed his run.

Overton again enjoyed a slight advantage in the laps following the restart, but Casebolt was back looking for the lead by lap 40.

The third time was a charm for Casebolt. Just as Overton reached the tail of the field, Casebolt used a bold move to drive to the outside of Overton in turns one and two on lap 44 and completed the winning pass down the back straightway as Overton remained stuck behind two lapped cars.

Overton quickly moved around the slower cars on the following lap and closed the gap to Casebolt as he had his own struggles with traffic. But it wasn’t enough for Overton to make a serious challenge, and Casebolt pulled away over the final two laps.

“I did not need those cautions,” said Casebolt, who became the first driver in the WoO LMS modern era to claim his first career series victory during a season-opening event. “Every time they came out I was getting ready to pass him. I was sitting there cussing and saying things nobody should ever say, but I finally got to him in lapped traffic. That was what we needed because we had the better car; we just had trouble getting to him and getting around him. He drove one heck of a race.”

Although he missed out on what would have been his biggest career victory, Overton was plenty happy with his performance. Making just his second start in a new MasterSbilt by Huey machine, Overton earned his first top-five in a WoO LMS event with his career-best series finish.

“They were double file in front of me,” Overton said of the lapped cars that slowed his pace and allowed Casebolt to make the winning pass. “When you get in traffic like that it’s way easier to be running second than leading them things. But that’s how it goes. For our second night in the car, I’m definitely happy with the way we ran tonight.”

The race’s only serious accident came on lap four when sixth-running Rodney Sanders of Happy, Texas, got over the cushion in turn four and rolled his No. 20 machine. Sanders emerged from his battered car without any apparent injuries, but the wreck ended what began as a promising run in his first-career WoO LMS A-Main start.

Reigning WoO LMS Rookie of the Year Frank Heckenast Jr. of Frankfort, Ill., began his sophomore season with a solid sixth-place performance. He was followed by Jordy Nipper of Gray, Ga., in the seventh spot.

Defending WoO LMS champion Darrell Lanigan of Union, Ky., was never a factor in finishing eighth. The result ended a streak of 11 consecutive top-five WoO LMS finishes for Lanigan, who two weeks ago broke his right thumb while racing in a non-series event in Arizona.

Tony Knowles of Tyrone, Ga., was part of a solid showing for home-state drivers, with his ninth-place finish making four top-10 results by Georgia-based teams. Behind him, Chub Frank of Bear Lake, Pa., rallied from 20th to 10th in making his first appearance in a Longhorn Chassis.

The World of Outlaws Late Model Series returns to Screven for the final night of the Winter Freeze weekend on Saturday. Another complete program is on tap, featuring time trials, heat races, last-chance qualifiers and a 50-lap, $10,000-to-win A-Main.