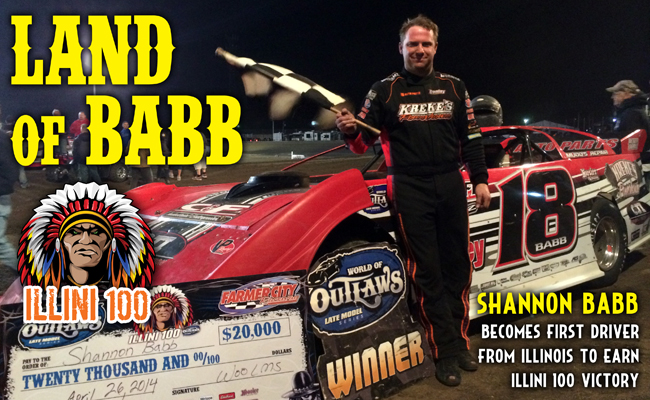 “Man I’m pumped, 20 grand right here at Farmer City, shoot!” exclaimed a very excited Babb in Victory Lane in front of a packed hometown crowd. “This race means a lot, there’s no better crowd in the Midwest than right here, every year they keep supporting it, we’ve got a lot of good race fans and race teams around here, it’s great. Love to win it right here at home.”

Polesitter Morgan Bagley and Rick Eckert brought the field of 24 to life for the Illini 100 with Eckert taking the point and leading the opening circuit with Pierce, Tim McCreadie and Bagley in tow. On the third lap Pierce took the lead from Eckert coming off the fourth turn and tried to hold off the field.

By the eighth lap, points leader and two-time champion Darrell Lanigan made his presence known as he rallied from his eighth starting spot to challenge for the third and eventually take the position from McCreadie. By the next lap, Lanigan rolled his Club 29 Race Car to the second.

Pierce continued leading, but Lanigan kept the pressure on, closing the gap on Pierce by the 16th lap. Lanigan put his nose to the outside of Pierce on several occasions but Pierce’s momentum on the bottom of the quarter-mile bullring keep him out front.

Lapped traffic came into play by the 21st circuit as both Pierce and Lanigan had their hands full behind several lapped cars. For the next eight laps the duo worked through lapped cars with Pierce still holding his momentum.

Pierce continued to lead until the 45th lap when the caution flew for debris. On the restart, Babb knocked off second place and by the 46th lap he moved up the track and took the lead from Pierce.

“When those guys went to the bottom, my mouth was watering, I just got up there and got ‘er done,” Babb said.

As the race went on after the lap-50 yellow flag, Babb could flex his muscle with the lead on the field, but after a final yellow on lap-88, the field bunched up again for the final time but Babb still held off a determined Lanigan for his first WoO LMS victory of the season.

Only four caution flags slowed the event which took just over 36 minutes to run. The first yellow flag came on the sixth lap as Steve Sheppard Jr. and Jeep VanWormer both spun in turn one. The next yellow would be on lap 45 for debris in turn four. The third yellow would come out on the 50th lap as Chase Junghans slowed in turn three with a flat tire. The fourth and final yellow would wave on the 88th lap as Clint Smith brought his car to rest in turn four with a right-rear flat tire. Both Junghans and Smith entered the work area and bolted on new rubber for the rest of the main event.

Babb drove his Petroff Towing, Donley Trucking and Krekes Powerhouse sponsored Rocket Chassis to the payday. Completing the top-five were eighth-starting Lanigan of Union, Ky., fourth-starting Pierce of Oakwood, Ill., sixth-starting McCreadie of Watertown, N.Y., and Eckert, of York, Pa., who drove to his first top-five filling in for three-time series champ Josh Richards in the #1 Rocket Chassis car.

Lanigan just couldn’t get over the hump he needed to get the win.

“We did have a good car all night, that’s my fault, I should have took the outside on the first restart and picked the inside,” stated Lanigan after his podium finish.

Lanigan turned the fastest overall lap of Ohlins Shocks Time Trials on Friday night, circling the blistering-fast oval in 13.369 seconds during Group ‘A’ of the split qualifying session.

The WoO LMS will be back in action to kick off an ultra-busy Month of May on Friday May 2, at Fayetteville Motor Speedway in Fayetteville, N.C., and Saturday, May 3, at Lavonia Speedway in Lavonia, Ga. Each event pays $10,000-to-win.

Armor All (one case of product to highest-finishing non-WoO driver): Shannon Babb