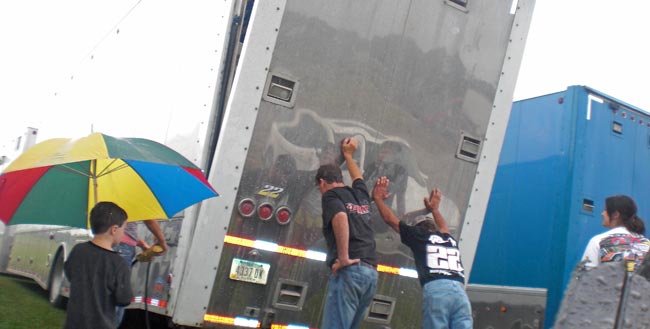 INDEPENDENCE, IA – July 12, 2011 – The World of Outlaws Late Model Series ‘Wild West Tour’ got off to wet start with the postponement of Tuesday night’s event at Independence Motor Speedway.

“We were ready for a great night of World of Outlaws racing at Independence but Mother Nature had other ideas,” said Hartzell, the husband of WoO LMS follower Jill George of Cedar Falls, Iowa. “Fortunately we were able to work with World of Outlaws officials to find a new date that fits well into the tour schedule, so we’ll regroup and try to build even more interest for August 8.”

Tuesday marked the sixth weather-related postponement of a WoO LMS event during the rain-plagued 2011 season.