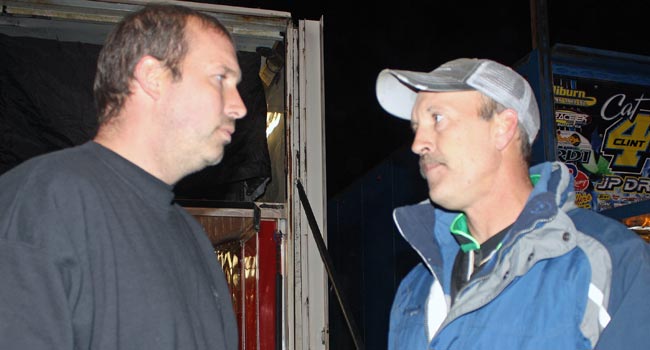 Clanton established himself as the early class of the event’s 40-car field, turning the overall fastest lap in split Ohlins Shocks Time Trials (12.786 seconds) and dominating the first of four 15-lap heat races. He will join Fuller and the evening’s other heat winners and runners-up in a redraw for the top eight starting spots in Saturday night’s $20,000-to-win Illini 100.

The only World of Outlaws Late Model Series regular to capture the Illini 100 in its four previous runnings, Clanton, 37, will attempt to join Billy Moyer of Batesville, Ark., as a two-time winner of the national tour’s lucrative event at the quarter-mile oval.

“Except for the year I won, I’ve always dug myself a hole here in this race,” said Clanton, whose Illini 100 triumph came in 2009. “Last year we the fastest car hot-lapping and qualified like 33rd, so we had to spend the rest of the weekend digging out of it. This year we were fast hot-lapping, set fast time, got a pole (start) in the heat and capitalized on it. Hopefully we can just keep the momentum running.”

Clanton, who registered the fastest lap during heat competition, had his Capital Race Car firing smoothly after experiencing some trouble during Thursday night’s open practice.

“I got some (hot) laps last night but not many,” said Clanton. “Every time I went out there the motor was missing and it took us all night to figure out what it was. We finally changed spark plugs and that was the problem.

“Tonight we went off some stuff that Tim learned last night, so it’s good to have a teammate that’s fast and we can rely on his notes.”

Fuller, 45, built up the largest heat-race margin of victory, topping defending Illini 100 champ Jimmy Mars of Menomonie, Wis., by 3.032 seconds in the second heat. He put himself in position for a career-best Illini 100 finish one year after failing to qualify for the extra-distance A-Main.

Jason Feger of Bloomington, Ill., and two-time WoO LMS titlist Josh Richards of Shinnston, W.Va., were also triumphant in Friday night’s heat races. Feger will bid to become the first home-state driver to win the Illini 100 while Richards will seek to better his career-best third-place finish in the event.

Moyer and Mars were among the second-place finishers in the heat races, joining Brian Birkhofer of Muscatine, Iowa, and Tim McCreadie of Watertown, N.Y. Moyer also was the fastest qualifier in Group ‘B’ of time trials with a lap of 13.115 seconds.

Saturday’s program, which begins with hot laps at 5 p.m., includes WoO LMS B-Mains and the Illini 100. The UMP Modifieds will also run B-Mains and a 50-lap, $5,000-to-win feature, and the track’s regular Street Stock class will be in competition.

Drivers will be chasing a $20,000 first-place prize in the 100-lap A-Main, which is scheduled for Saturday evening (April 6) at the high-banked, quarter-mile oval in central Illinois.

For live updates of news, pit notes and results from tonight’s action, click the ‘Full Story’ link below. Be sure to refresh your browser throughout the night to see the latest information.

Clanton’s run to victory in the first prelim was the evening’s most dominant performance. He turned the fastest lap of any heat victor at 13.468 seconds.

The complete orders of finish from the heats can be seen here.

8:35 p.m. CT – The first of four 15-lap heat races is aligning in the pit area and will roll onto the speedway shortly. The top four finishers in each prelim will transfer to tomorrow night’s Illini 100, with the top two redrawing for the first eight starting spot in the A-Main.

8:25 p.m. CT – Ross Camponovo wasn’t planning on drinking some beers until after tonight’s racing action, but he’s already cracking one open because his night is over.

The Mississippi driver’s visit to Farmer City has simply been a nightmare. His primary car — with “pretty much everything on it new except the frame,” he said — was plagued by a missing engine during last night’s practice. He changed spark plugs, carburetors, the distributor and a battery in hopes of fixing the problem, but it never disappeared (he didn’t get in a fast lap as a result) and it continued again tonight when he went on on the speedway for track-packing. As a result, he pulled out his backup car for time trials — and then he promptly drove it onto the fourth turn on the first of his qualifying circuits, ending his night.

“I thought I was going over the wall,” said Camponovo, who reported significant damage to most of his car’s bolt-on parts after he rode the concrete. “Farmer City definitely hasn’t been good to us so far.”

Camponovo hopes he can decipher the source of his primary car’s woes and run it in one of tomorrow night’s B-Mains. But whatever outcome he experiences tomorrow night, he still plans to stay on the road with his Mississippi buddy, WoO LMS regular Bub McCool, and enter next weekend’s Buckeye 100 at Wayne County Speedway in Orrville, Ohio.

7:50 p.m. CT – Former Illini 100 winners Shane Clanton and Billy Moyer topped Ohlins Shocks Time Trials, turning the quickest laps in their respective groups. Clanton’s lap of 12.786 seconds in Group ‘A’ was the overall fastest of qualifying, while Moyer led Group ‘B’ with a circuit of 13.115 seconds.

With Group ‘A’ setting the lineups for heats one and two and Group ‘B’ results aligning heats three and four, Clanton and his Kennedy Motorsports teammate, Tim Fuller, earned pole position starting spots in tonight’s first pair of 15-lap preliminaries. Moyer and Tim McCreadie will start from the pole in heats three and four, respectively.

Full results from time trials can be seen here.

6:50 p.m. CT – Shane Clanton — the only WoO LMS regular to win the Illini 100 — showed he’s serious about capturing the race again, demonstrating some serious speed in hot laps. His circuit of 12.726 seconds was the fastest of tonight’s practice.

WoO LMS Rookie of the Year contender Eric Wells, who turned heads in February with his impressive performance at Volusia Speedway Park, appears to have lost no speed during his break from World of Outlaws action. He was second-fastest in practice with a lap of 12.836 seconds.

6:20 p.m. CT – Teenage dirt Late Model standout Tyler Reddick is on tonight’s entry list, but it’s uncertain if he’ll arrive at the speedway in time to compete. The 17-year-old has spent the day testing a NASCAR Craftsman Truck at Rockingham (N.C.) Speedway and plans to fly back to Illinois afterward. As a last resort, he will tag the back of a B-Main tomorrow night and attempt to race his way into the A-Main.

6:10 p.m. CT – The drivers’ meeting has concluded and teams are now firing up their machines in preparation for the imminent start of hot laps. A field of 40 cars has been signed in for tonight’s action, which will include Ohlins Shocks Time Trials split into ‘A’ and ‘B’ groups and four 15-lap heat races transferring the top four finishers from each.

Tonight’s drivers’ roster is below:

5:40 p.m. CT – Derek Chandler of Pontiac, Ill., is certainly showing the proper spirit for the Illini 100 weekend. He’s debuting a helmet that’s been painted with the iconic ‘I’ logo of the nearby University of Illinois Fighting Illini and colorful indian feathers.

“I thought it would be cool to do something like this for the Illini 100,” said Chandler, a 25-year-old racer who is also a big fan of the Fighting Illini athletic teams. “I’ve been wanting to do one of my helmets like this and I figured this weekend would be the perfect time to wear it for the first time.”

5:25 p.m. CT – Shane Clanton, who sits second in the WoO LMS points standings, is hoping to maintain his early-season momentum this weekend with a completely new pit crew supporting him.

Forced to find new help after his chief mechanic, Jonathan Owenby, left the Kennedy Motorsports team following February’s season-opening stretch, Clanton hired Brock Wise of Gray, Ga., to serve as his crew chief in late February. The 27-year-old Wise, who drove dirt Late Models for several years before selling his equipment after his father was stricken with cancer (his dad has since overcome his medical issues), was connected to Clanton through chassis builder Barry Wright, who employed Wise when Dennis ‘Rambo’ Franklin drove Wright’s house car.

Clanton is also receiving pit-area assistance this weekend from Bruce Otto, who has served as 2011 WoO LMS Rookie of the Year Pat Doar’s chief mechanic in recent seasons. Otto offered his services to Clanton for Farmer City after Doar decided to skip this weekend’s action, ending his streak of entering every WoO LMS event since the start of the 2011 season.

Tonight’s drivers’ meeting is scheduled for 6 p.m. at the WoO LMS trailer, with hot laps set to begin at 6:30 p.m.