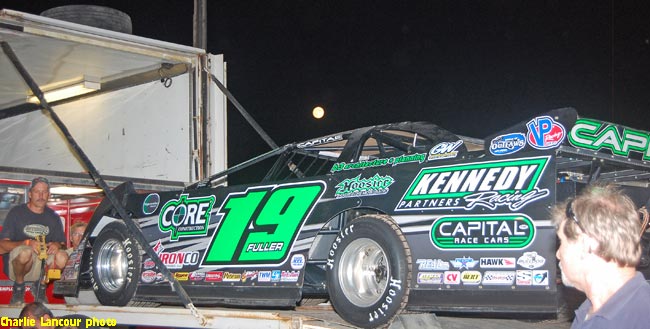 SHAWANO, WI – Aug. 1, 2012 – A late-afternoon thunderstorm that drenched Shawano Speedway was ultimately too much to overcome, forcing the postponement of Wednesday night’s World of Outlaws Late Model Series event.

The national tour’s third annual visit to the half-mile oval 45 minutes Northwest of Green Bay has been rescheduled for Tues., Aug. 7. All tickets and pit bands purchased for Wednesday night’s program will be good for admission on the race’s new date.

While the skies cleared following the burst of rain and a large crowd filed into the speedway, all efforts to dry the clay surface for competition were unsuccessful. Shawano and WoO LMS officials jointly decided to postpone the event around 8:30 p.m. after it became apparent that the work would take an extended period of time to produce a surface suitable to for safe racing.

“We certainly wish we could have run tonight’s racing program as scheduled for all the fans and competitors who turned out,” said WoO LMS director Tim Christman. “Unfortunately, Mother Nature just dealt us a tough hand tonight. Everyone made a great effort to get the track ready for racing – we had packer trucks, IMCA Sport Mods and the track grader all attempt to bring the surface around, but racing tonight just wasn’t in the cards.”

Shawano’s rescheduled event will now close a stretch of WoO LMS racing in the Upper Midwest. The circuit will headline the 25th annual USA Nationals on Aug. 2-4 at Cedar Lake Speedway in New Richmond, Wis., and compete on Mon., Aug. 6, at Independence (Iowa) Motor Speedway.

For live updates of all the news, pit notes and results from tonight’s action, click the ‘Full Story’ link below. Be sure to refresh your browser throughout the night to see the latest information.

After the IMCA Sport Mods that went on the track to help pack it struggled to negotiate the still-slick surface, the speedway prep crew attempted to scrape the clay in the first and second corners with the grader. Once it became apparent that the work would take an extended period of time to produce a racing surface suitable to safely begin the program, the decision was made to postpone the show.

All tickets and pit bands purchased for Wednesday night’s event can be used for admission again on Tues., Aug. 7.

8:15 p.m. CT – Tim Fuller made the over 1,000-mile haul from his shop in Edwards, N.Y., to Shawano, Wis., feeling decidedly less stressed than he has on any other trip this year. He drove his own rig, yes, but his cars weren’t inside the trailer and he didn’t have to worry about paying the fuel bill for his trip.

Tonight, of course, marks Fuller’s WoO LMS debut as a teammate of Shane Clanton under the Kennedy Motorsports banner. The stress of fielding his own equipment and getting it to the track on his own dime is gone for the tour’s 2007 Rookie of the Year — and he hopes results like his spectacular 2009 season (seven WoO LMS wins, including a record-tying four in a row) will follow.

“I’m excited to get going,” said Fuller, who has two Clements-powered Capital Race Cars ready to race. “I’m thankful for the opportunity (team owner) John Kennedy has given me and hopefully we can give him the kind of results he wants.”

Fuller is accompanied by his regular crewman, Eugene (‘Donnie Corellis’) Mullany, and Ross Robinson, the young Delaware dirt Late Model driver who moves to Fuller’s side after working for former Kennedy Motorsports chauffeur John Lobb for the past year.

7:45 p.m. CT – WoO LMS race director Bret Emrick is now conducting the Drivers’ Meeting, signaling that dirt Late Models will soon be called to the speedway to finish drying and packing the track.

A total of 38 cars have showed up for tonight’s program, but Brian Shirley, Brian Birkhofer and Billy Moyer Jr. have decided to pull out from competition and save their equipment for this weekend’s USA Nationals at Cedar Lake Speedway.

7:10 p.m. CT – Some additional pockets of rain have missed Shawano, so things are looking up. The big half-mile track’s surface is still quite wet, however, and drying and packing efforts are underway. Drivers have been spending time signing autographs along the low chain-link fence separating the back of the grandstand area from the pits — Shawano Speedway’s setup provides fans a perfect view of teams working on their cars in the pit area — and watching the track crew at work.

Several IMCA Sportsman-Modifieds have begun rolling onto the racetrack to assist in the surface-drying process. The sun is shining and it appears that no rain is on the way here, so hopefully action will get underway soon.

5:45 p.m. CT – It’s been two-and-a-half weeks since Brian Shirley last ran a race, but he has a good reason for being inactive until tonight. He spent the previous month racing 28 times in 32 days — often in temperatures of over 100 degress — en route to winning the DIRTcar Summer Nationals championship.

Did Shirley and his crewmen, Matt Suzuki and Aaron Faugust, have enough energy remaining after their grueling stretch of racing to properly celebrate their $25,000 title? Not really.

“We celebrated for like an hour (after the finale on July 14 at Ohio’s Oakshade Raceway) and then we were ready to head home,” said Shirley. “Once we got back to the shop everybody went their separate ways. We had all about had it.”

Shirley stayed away from his race cars for two full days to recover. He spent one weekend with his wife and two kids, and then the next weekend he made a quick trip to Clearwater, Fla., with just his wife to get in some R&R.

Now Shirley is ready to get back to the grind, though.

“They’ll be a time for us to properly celebrate the championship once the season is over,” said Shirley. “It’s back to business for us now. We still have a lot of big things we’d like to accomplish this year, starting tonight and this weekend at Cedar Lake (the USA Nationals).”

4:50 p.m. CT – The rain has stopped and competitors and fans are milling about the pit and grandstand areas. Puffy white clouds and blue sky is now moving closer from the west, raising hopes that racing will procede tonight.

Waiting out some rain

4:25 p.m. CT – Thirty-three cars are currently in the pit area for tonight’s action, but they are all either loaded in trailers or covered with tarps because a thunderstorm is hitting the speedway. A line of storms formed northwest of Shawano during the afternoon and has drifted across the area.

The intensity of the rain has been disappating as it approaches Shawano, however, and the size of the line isn’t large, so the hope is that the show can go on tonight. It appears, in fact, that, while it is currently raining, the heaviest precipitation has so far missed the track and the skies are brightening slightly to the west.