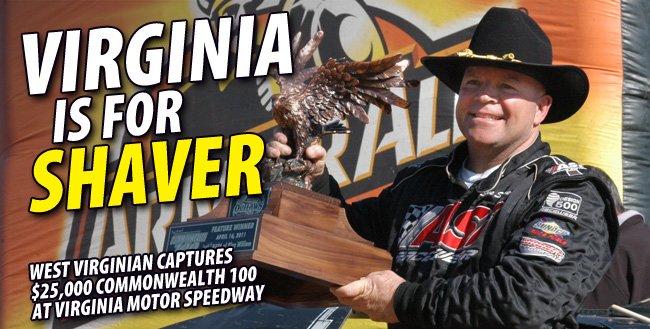 Shaver’s Strategy Leads To Convincing $25,000-Plus Victory In Commonwealth 100 At Virginia Motor Speedway

The 47-year-old veteran from Vienna, W.Va., grabbed the lead from Steve Francis of Ashland, Ky., on lap three and never wavered for the remainder of the distance. He calmly conserved his tires while repelling a pair of threats en route to a World of Outlaws Late Model Series victory worth $25,050.

“Our goal was to get the lead early and just try to fend off any challenges, and that’s what we did,” said Shaver, who started fourth driving a Rocket car from the stable of North Carolina’s storied K&L Rumley team. “I just tried to aim for the brown (in the racetrack) and not spin the tires to keep from wearing them out.”

Shaver pulled away following the race’s 11th and final caution flag on lap 73. He crossed the finish line 4.722 seconds – nearly a full straightaway – ahead of Mooresburg, Tenn.’s Scott Bloomquist, who slipped his self-built Team Zero car by Darrell Lanigan of Union, Ky., for the runner-up position on lap 98.

Lanigan, who led last year’s inaugural Commonwealth 100 until slowing with a flat tire just nine laps from the finish, offered Shaver a brief mid-race challenge but settled for a third-place finish in his Rocket mount. Francis fell to fourth at the checkered flag after starting from the outside pole and leading laps 1-2 in his Barry Wright car and ninth-starter Jonathan Davenport of Blairsville, Ga., completed the top five in the Barry Wright house car.

Shaver and his veteran team – led by Rumley family patriarch Lee Roy and his son Kevin – had the perfect combination for a half-mile oval that stayed surprisingly racy on a breezy, sun-splashed afternoon. The race was pushed to the daylight hours on Sunday after wet and stormy weather overran the area on Saturday night.

“Typically this place is hard on tires – even at night – and we thought with it being a daytime race we could possibly have to pit two or three times,” said Shaver, who registered his fourth career WoO LMS A-Main triumph. “So our strategy was to start out mid-range in (tire) compound and try to stay up front and out of trouble as long as we could.

“The plan was for my guys in the pits to make a decision on whether we should pit by trying to look at the tires when I’d go by real slow (under caution). If it got to the point where they couldn’t see the cross-grooves, they were gonna pull me in and we’d make a tire change.”

But tire wear never became a problem for Shaver, who had plenty of rubber left to reach Victory Lane at VMS for the first time in his career.

“I wasn’t spinning the tires any and the car worked great where I didn’t have to slide it sideways, and we were able to make our first (tire) choice go the full hundred,” said Shaver. “Francis showed me his nose once (on lap 40) and Lanigan showed me his once too (on lap 67), but my car steered fine and I was able to just pull right back to where I needed to be.

“It was all because of the work the guys did on the track,” he continued. “Whatever they did, they gave us a great daytime racetrack. I can’t remember being on a better daytime track. It was fun to run on. You could get up there in the rough stuff and run a little bit or you could get back down in the smooth.”

Shaver was especially proud to deliver a major-money win to the Rumley family, which has been fielding race cars for more than 50 years. The 70-something Lee Roy Rumley built the powerful engine bolted in Shaver’s mount.

“They’re great people and it’s just been so much fun to race with them since last year,” said Shaver, who swept a WoO LMS doubleheader driving for the Rumleys last year at West Virginia Motor Speedway. “We’re all on the same page. We just want to race about 40 times and have fun doing it – and so far, we’ve been having a lot of fun.”

The 47-year-old Bloomquist, meanwhile, was on the move in the closing laps, passing Jason Feger of Bloomington, Ill., for fourth on a lap-72 restart and Francis for third on lap 93 before finally grabbing second from Lanigan with the two-to-go signal out. But his hard-compound tires came on too late to give him a shot at Shaver.

Bloomquist, who started fifth, conceded that he was outfoxed in the rubber-selection game in his first Commonwealth 100 appearance.

“The promoter said that he had a surprise for us today and I didn’t really know what that meant. I think I kind of do now,” Bloomquist said with a smile following the race. “The racetrack really took a long time before it laid down. I would have bet the farm that those guys (Shaver) wouldn’t finish on those tires. My right-front and left-rear (tires) were harder than (Shaver’s) right-rear, so…we had three hard tires. He went quite a bit softer than I dreamed would make it, and it made it.

“(Shaver) still had quite a bit of rubber left and could run a little bit longer. Obviously they knew a little more than I did.”

Lanigan, 40, fell short in his bid for a third consecutive WoO LMS victory. He appeared primed to erase memories of his near-miss in last year’s Commonwealth 100 when he advanced from the sixth starting spot to second by lap 55, but he couldn’t maintain Shaver’s pace.

“I just got so loose,” said Lanigan, whose early-season struggle with lower-back pain was recently diagnosed definitively as a fractured tailbone. “I actually thought I was getting a flat because the car got so loose, so I kind of backed off to try to make it to the end.”

Francis, 43, finished fourth driving a car that he didn’t even have on the track for the first time all weekend until he lined up for the 100-lapper. Mechanical trouble that developed during Sunday’s hot laps in his Tim Logan-owned car forced him to pull out his own machine, which he had reserved for backup duty at VMS.

Under WoO LMS rules for two-day shows, however, Francis was allowed to keep his outside-pole starting position despite switching cars.

Chris Madden of Gray Court, S.C., who won last year’s Commonwealth 100, finished sixth after a rollercoaster race that saw him start from the pole position but fade out of the top 10 by mid-race. Rick Eckert of York, Pa., ran in the top 10 throughout the distance and placed seventh; 18th-starter Josh Richards of Shinnston, W.Va., rallied to finish eighth – and maintain his WoO LMS points lead – after being involved in a multi-car tangle on lap nine; Dale McDowell of Chickamauga, Ga., was ninth in NASCAR star Clint Bowyer’s car; and Chub Frank of Bear Lake, Pa., finished 10th after starting 26th.

Feger, who set fast time on Friday night but had to run a B-Main to qualify for the Commonwealth 100, climbed as high as fourth in his first-ever start at VMS. But a lap-98 scrape with Madden as they battled for fifth place sent Feger into a 360-degree spin in turn two – and on to a disappointing 14th-place finish.

Sunday’s program was capped by the 30-lap ‘Rumble on the River’ Non-Qualifiers’ Race, which Brad Neat of Dunnville, Ky., led from wire-to-wire to pocket a $3,000 consolation prize after falling one spot short of transferring to the Commonwealth 100 in a B-Main on Friday night.

The next action for the WoO LMS is a Midwestern doubleheader on April 29 at Hartford (Mich.) Speedway and April 30 at Bluegrass Speedway in Bardstown, Ky.