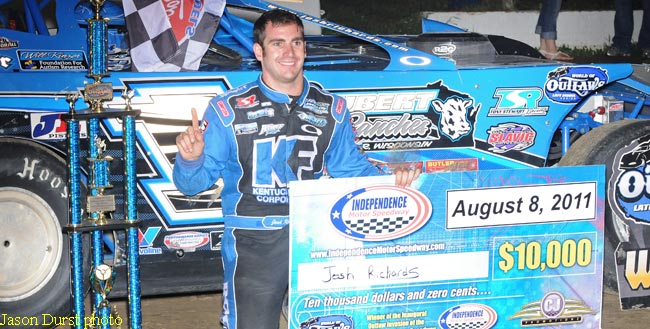 Richards, 23, survived a late-race scare to top the inaugural WoO LMS event at the three-eighths-mile Independence oval. After pacing the race from the initial green flag, he slipped out of the groove off turn four on lap 36, allowing WoO LMS points leader Rick Eckert of York, Pa., to dive underneath and lead the circuit.

But Richards managed to turn back Eckert’s bid, sliding ahead through turns one and two and then maintaining a steady edge for the remainder of the distance. He drove his father Mark’s Rocket Chassis house car under the checkered flag 0.611 of a second in front of Eckert’s Team Zero by Bloomquist machine.

Eckert, 45, settled for his fourth runner-up finish in the last six WoO LMS events and sixth overall of the season. He maintained a healthy 56-point lead over Richards in the circuit’s standings with 11 A-Mains remaining on the 2011 schedule.

Clint Smith of Senoia, Ga., finished third after advancing from the 10th starting spot in the same Rocket car that he flipped onto its roof during a USA Nationals B-Main on Saturday night. It was his third top-five finish of the season.

Brian Birkhofer of Muscatine, Iowa, started and finish fourth – though he ran third until being overtaken by Smith on lap 25 – in his MB Customs mount and 2010 WoO LMS Rookie of the Year Austin Hubbard of Seaford, Del., was fifth in Dale Beitler’s Rocket car to tally his first top-five finish since July 15 at River Cities Speedway in Grand Forks, N.D.

Richards, who started second and outgunned polesitter Billy Moyer of Batesville, Ark., for the lead at the start, knew he was fortunate to escape with the checkered flag after leaving the door open for Eckert on lap 36.

“Once we found the groove (of rubber) low I was just trying to get through lapped traffic and I slipped (high off turn four),” said Richards, who made his third straight start with a Roush-Yates Ford engine under the hood of his familiar No. 1. “I pretty much almost gave the race away. If I would’ve run second I would’ve deserved to just because I slipped up out of the groove.

“Eckert came down (to the inside on the homestretch) and I knew the only shot I had was to pinch him down into one – he said he would’ve done the same thing. The track just had so much grip in the bottom (lane) from the middle to the end (of the race), and luckily we were able to get back to it and hold on for the win.”
{vimeo}27478364{/vimeo}
Eckert wasn’t quite in position to take advantage of Richards’s slip.

“I was pretty good before (the surface) rubbered (near the halfway point),” said Eckert, who started fifth. “I got right up through there to second, and then it started rubbering. I would’ve liked to have a shot there at Josh before it did.

“After it rubbered I was running right there on him on, just trying to stay close in case he slipped, and then one lap I come off four and the oil pressure went to zero and the red light came on. I just eased over and left off (the gas), and then it popped back up and I wheeled back out there.

“That just happened to be the lap he drove out of the rubber off (turn) four, so I was back too far,” he continued. “If I’d have been close to him, I could’ve just drove right by him.”

Eckert still was able to charge up the inside of the homestretch and nip Richards at the start/finish line to lead lap 36, but he couldn’t pull completely ahead.

“He come left into one to get back in the rubber,” said Eckert. “I was past his number, but if I was leading I’d have come left too. I guess it would’ve been nice if the straightaway was a little longer.”

“If we could’ve beat him to the front, maybe we could’ve won the race,” said Eckert, whose “But I’ll take a second every race to the end of the year if I have to. When you’re paying your own bills, second pays better than third.

“I come to the race to win – it isn’t like we get to second and give up. I was trying hard and really wanted to win, but tonight we just we didn’t have a whole lot of racetrack left once we got to second.”

Richards, meanwhile, hopes his hot streak – two straight wins and three in his last five starts – will continue, giving him at least a shot at catching Eckert in the points standings.

“It’s obviously hard to gain points when he’s running second,” Richards said of Eckert. “He’s really running good this year, but so are we. We’re not going to give up. We’re gonna keep chasing that orange car and see what happens.”

Smith, 46, enjoyed a solid comeback from his weekend-ending rollover at Cedar Lake, ending his trip on a high note.

“We like the rubber better than anybody here, but we were actually better in the slick condition early in the race,” said Smith. “I was rolling when it was slick and got right up to third behind those guys (Richards and Eckert). We were just too tight there at the end and rolling over too much. I still could’ve run them hard, but I was afraid I would blow my right-rear tire.

“After barely getting this car we flipped ready to go on the racetrack today and starting 10th, we’ll take a third.”

Three caution flags slowed the race, all for incidents involving WoO LMS standouts. Shane Clanton of Fayetteville, Ga., slowed with a dead battery on lap four and did not continue; Tim McCreadie of Watertown, N.Y., got the worst of a lap-21 accident in turn one; and Darrell Lanigan of Union, Ky., slowed with a cut left-rear tire on lap 22.

The incident that swept up McCreadie was the worst of the night. He was running ninth when the lapped car driven by WoO LMS rookie John Lobb of Frewsburg, N.Y., was sent spinning in turn one directly in front of McCreadie, who slammed Lobb’s car hard. McCreadie’s Sweeteners Plus Victory Circle machine came to rest backwards in turn one, its right side sporting significant damage.

McCreadie, who was sore but otherwise injured after the wreck, was eliminated from further action. Also forced out due to the wreck was Chad Simpson of Mt. Vernon, Iowa, whose car was hit in its left side by Tim Fuller of Watertown, N.Y. Simpson retired immediately while Fuller ran five more laps before calling it a night.

Moyer, who ran second for the race’s first 13 laps, tumbled to sixth by lap 24 and finished in the position. Jason Feger of Bloomington, Ill., placed seventh, followed by 20th-starter Pat Doar of New Richmond, Wis., who was the event’s highest-finishing WoO LMS rookie; 19th-starter Vic Coffey of Caledonia, N.Y., who passed Fuller for ninth in the tour points standings; and Lanigan, who rallied after his mid-race pit stop.

Chad Simpson established a new track record in the 34-car Ohlins Shocks Time Trials session, blistering the bullring in 14.665 seconds. It was his first career fast-time honor on the WoO LMS.

Rain that fell through the morning and early-afternoon hours threatened the event, but the skies cleared abruptly and racing went on as scheduled in front of a near-capacity crowd at the fairgrounds track.

The WoO LMS is off for one weekend before returning to action with a doubleheader in Michigan, making first-ever stops on Aug. 19 at Winston Speedway in Rothbury and Aug. 20 at Merritt Raceway in Lake City. Both 50-lap A-Mains will pay $10,000 to win.