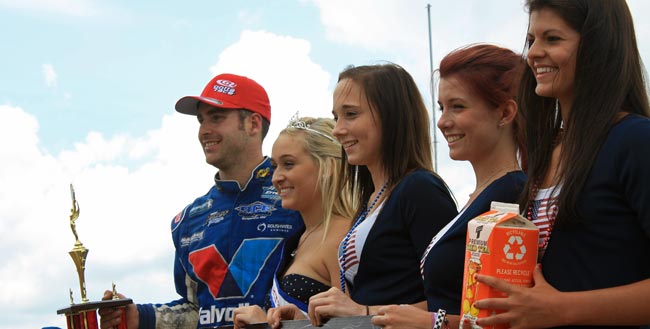 The two-time WoO LMS champion started from the pole position and led the entire distance to become the first driver to win both Firecracker 100 preliminary features since the weekend was expanded to three full nights of racing in 2010. He earned $6,150 for his fifth triumph of the season on the national tour with his father Mark’s Valvoline-sponsored Rocket Chassis house car.

Shane Clanton of Zebulon, Ga., shared the front row with Richards for the start and chased the WoO LMS points leader from flag-to-flag. He closed within a couple car lengths of Richards in the final laps but settled for a second-place finish, 0.397 of a second behind the victor.

Richards, 25, cited his performance in Ohlins Shocks Time Trials and his heat race for propelling him to the checkered flag on a challenging track surface baked by the afternoon sun. Heavy rain on the event’s originally-scheduled date on Friday night forced officials to run the program on Saturday afternoon before the evening’s Firecracker 100 finale.

“The pill draw was huge,” said Richards, who picked the pole position for the A-Main in the redraw among heat winners, “but we still had to earn our spot up front. We went out second-to-last in qualifying (Group ‘B’), but I knew we had a really good car so I just tried to make a smooth lap and we ended up qualifying fifth. Then I was able to get by (Ron) Davies there in the heat (for the win); I had to make the move early because I knew once everybody got in line it would be hard to pass and we were able to get that done.”

Richards cruised alone out front for most of the race, which was slowed by just a single caution flag on lap nine for a turn-four tangle involving John Blankenship of Williamson, W.Va., and Don Angellichio of Greensburg, Pa. Clanton, 36, drew close only when Richards began nearing slower cars.

“We got a little closer there at the end because I think Josh didn’t want to get in lapped traffic,” said Clanton, who remained second in the WoO LMS points standings, 28 points behind Richards. “With a rubbered-up (afternoon) racetrack it’s kind of hard to deal with lapped traffic, so he just done his job. He got out there to the lead and didn’t make any mistakes.

Richards is confident entering tonight’s $30,000-to-win Firecracker 100. He will start the first heat race from the pole position.

“Overall we really didn’t make any changes to the car from Thursday night,” said Richards, who outdueled Steve Shaver of Vienna, W.Va., to win the first preliminary A-Main. “I know the track was different today, but I still feel like it had a pretty good balance to it. I know the racetrack is gonna be 180-degrees different tonight, but I feel pretty good about our chances.”

Fifty-nine cars were signed in for Saturday afternoon’s racing program.

Ohlins Shocks Time Trials were split into ‘A’ and ‘B’ groups, with the first half competing for starting positions in heats one and two and the second half racing against the clock to align heats three and four. Andrew Reaume of Blenheim, Ont., was one of the first drivers on the track in Group ‘A’ and clicked off a lap of 16.260 seconds that was the fastest overall of the night.

Reaume’s first-ever WoO LMS fast-time honor made him just the second Canadian to achieve the milestone. He joined Ricky Weiss of Winnipeg, Manitoba, who was the quickest qualifier in 2008 at River Cities Speedway in Grand Forks, N.D.

After the afternoon program teams began preparing their cars for the Firecracker 100 by GottaRace.com finale on Saturday night. Officials expect to start the evening show on schedule with hot laps at 6:50 p.m. and the first of six heat races at 7:35 p.m.

More information on the Firecracker by GottaRace.com can be obtained by logging on to www.lernerville.com.

The busy day begins this afternoon at 12 noon with hot laps for the second preliminary program. At 1 p.m. the racing — heat races, B-Mains and a 30-lap A-Main paying $6,000 to win — will commence, and then teams will regroup for tonight’s Firecracker 100 finale that is scheduled to start at 7:35 p.m.

3 p.m. – Josh Richards remained perfect for the Firecracker 100 weekend after leading all the way to capture this afternoon’s 30-lap WoO LMS preliminary A-Main.

With the $6,000-plus victory — his fifth of the 2013 WoO LMS campaign — Richards became the first driver to sweep both Firecracker 100 preliminary features since the weekend was expanded to three full nights of action in 2010.

Shane Clanton, who is second behind Richards in the WoO LMS points standings, chased Richards for the entire distance to take the runner-up spot. Jared Landers scored a career-best WoO LMS finish of third, Austin Hubbard placed fourth and Gregg Satterlee was fifth.

The afternoon show was pushed along with rain continuing to be a threat — and that’s a good thing, because a shower hit the track as Victory Lane ceremonies were being conducted. It does not appear to be a significant line of precipitation moving through — in fact, the rain ceased after only slightly slickening the racing surface and barely even wetting down the pit area — so the Lernerville track crew is confident that tonight’s Firecracker 100 finale will begin on schedule with the first heat at 7:35 p.m.

2:10 p.m. – After three B-Mains won by John Blankenship, Morgan Bagley and Bub McCool, the 30-lap A-Main is lining up in the pit area. The headliner will be starting in a few minutes.

With the B-Mains on the track to keep the show moving, the heat winners redrew for the top-six starting spots in the A-Main at the WoO LMS trailer. Richards picked the pole position, with Clanton grabbing second, Landers third, Satterlee fourth, Hubbard fifth and Eckert sixth.

Heat results can be seen here.

1:10 p.m. – Andrew Reaume of Blenheim, Ont., was the fastest overall qualifier in Ohlins Shocks Time Trials, turning a lap of 16.260 seconds in Group ‘A’ of the split session. It was his first-ever WoO LMS fast-time honor.

Qualifying was marked by a rash of disqualification for deck-height infractions. A total of 13 drivers had their times disallowed, including Jared Miley and Morgan Bagley in Group ‘A’ and Davey Johnson, Brandon Wearing, Dan Stone, Brian Tavenner, Dale McDowell, Brady Smith, Clint Smith, Tim Fuller, Chub Frank, Tim McCreadie and Michael Holmes in Group ‘B.

Rick ‘Boom’ Briggs was fastest in practice with a lap of 15.815 seconds, followed by Darrell Lanigan (15.849), Dan Stone (15.867), Eric Wells (15.992) and Clint Smith (16.024). But all those drivers went out early in the session; times steadily slowed as hot laps progressed as the cars and afternoon combined to take moisture and grip out of the track surface much quicker than during an evening show.

11:35 p.m. – The drivers’ meeting is complete and engines are beginning to fire in preparation for this afternoon’s hot laps, which hit the track at 12 noon. A total of 59 cars are signed in for competition this afternoon.

Bloomquist, who was at the track yesterday and ready to compete, said his departure from Tennessee to Pennsylvania was delayed while he made arrangements for repairs on his motorhome. The 90 percent chance of rain that was listed for Thursday also kept him from rushing to Lernerville.

Other newcomers today are Bump Hedman of Sugar Grove, Pa., and Kevin Wilson of Stoneville, N.C.

10:35 p.m. – Teams are hard at work making final preparations for this afternoon’s preliminary program, which will give those who fared poorly on Thursday night another shot at improving their starting position in tonight’s Firecracker 100 heat races. Tonight’s heats will be aligned using each driver’s best finish from the two preliminary cards.

As has been the case across western Pennsylvania for the past week, a threat of rain remains in the weather forecast. But the sun has been shining throughout the morning here at Lernerville Speedway — and all forecasters appear confident in saying that today’s conditions will not foster the growth of the severe thunderstorms that struck the area last night.

Regardless, track and WoO LMS officials plan to push the afternoon and evening shows along without delay to give the teams and fans the racing they crave today.