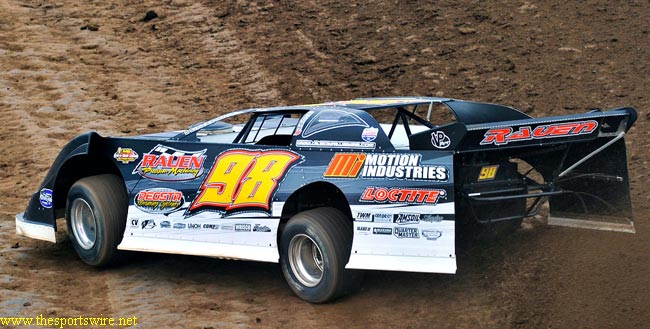 NEW RICHMOND, WI – Aug. 5, 2011 – Jason Rauen of Farley, Iowa, surprised even himself with a clean sweep of Friday night’s qualifying program for the USA Nationals presented by U.S. Steel at Cedar Lake Speedway.

An upstart 31-year-old dirt Late Model driver making just his third career appearance at the high-banked, three-eighths-mile oval, Rauen was fastest in the 54-car Ohlins Shocks Time Trials session, won a heat race and captured the 10-lap dash to earn the pole position starting spot in Saturday night’s 24th annual 100-lap, $50,000-to-win A-Main. He will lead the field to the green flag in what will be both his first-ever start in the USA Nationals and a World of Outlaws Late Model Series event.

“I had no idea we would do this tonight,” said an awestruck Rauen, who operates a precision machine shop alongside his father in their home town of Farley, Iowa. “Our goal was just to make the show. Then we timed good, came out of the heat good with a win and won the dash.

“I don’t want to have a big head, but it feels good. We’ve had a tough last month of racing with a lot of issues and problems, so this is a great rebound. Hopefully we can keep it up tomorrow night and come out of here with a good finish.”

Rauen started third in the dash, which pitted the top-two finishers from each of the night’s five 15-lap heat races in a sprint to determine the alignment of the first five rows in Saturday evening’s USA Nationals. He was moved to the pole, however, when Chris Simpson of Oxford, Iowa, was penalized two spots for starting the race too early and took advantage of the break, leading the entire distance with his MB Customs/ProPower combination.

Jimmy Mars of Menomonie, Wis., passed Chad Simpson of Mt. Vernon, Iowa, with two laps remaining in the dash to finish second and secure the outside pole starting spot in the 100-lapper. Mars, who also was a runner-up in his heat, is a two-time winner of the USA Nationals.

Chad Simpson held on to finish third, followed by two-time defending WoO LMS champion Josh Richards of Shinnston, W.Va., and current WoO LMS points leader Rick Eckert of York, Pa. All three drivers won heat races and will start the USA Nationals from the positions they placed in the dash.

Rounding out the top 10 in the dash was first-heat winner Ronny Lee Hollingsworth of Newport, Ala.; Dennis Erb Jr. of Carpentersville, Ill.; A.J. Diemel of Bonduel, Wis., who used a steel-block engine; Chris Simpson; and 18-year-old Brandon Sheppard of New Berlin, Ill.

Rauen, whose qualifying lap of 13.484 seconds fell short of the Cedar Lake track record (12.972 seconds) he established on June 17 during the speedway’s DIRTcar Summer Nationals event, knows he has a supreme challenge ahead of him on Saturday night.

“We know our team’s working and our cars and everything are clicking,” said Rauen, whose car is wrenched by Eckert’s former chief mechanic Zach Frields. “But 100 laps is a long race when you have the best in the business behind you. The guys starting behind me have been around this place a lot more than I have – I mean, Jimmy (Mars) has thousands of laps here – so if we can hold them off it’ll be a hell of an accomplishment.”

Mars and Eckert were the only previous USA Nationals winners to crack Saturday’s starting field through a heat race. Five-time victors Billy Moyer of Batesville, Ark., and Scott Bloomquist of Mooresburg, Tenn., finished fourth and sixth, respectively, in the third heat, and two-time champion Brian Birkhofer of Muscatine, Iowa, missed transferring by two positions in the second preliminary.

Birkhofer is guaranteed a starting berth in the USA Nationals, however, because he won Thursday’s Dart Corn Belt Clash Series feature at Cedar Lake. The highest finisher in that race who does not qualify for the 100-lapper will receive a provisional spot.

The qualifying heats were tough on several contenders, including:

* Don O’Neal of Martinsville, Ind., who was knocked out of the second heat with left-front damage sustained in a lap-10 scrape with Steve Francis of Ashland, Ky., as they battled for the final transfer position.

* Shannon Babb of Moweaqua, Ill., who pulled off the track during the pace lap of the second heat due to a broken brake caliper.

* Jonathan Davenport of Blairsville, Ga., and Shane Clanton of Fayetteville, Ga., and who tangled in turn two while running second and third, respectively, on lap six of the fourth heat. Clanton spun while Davenport was forced to the pit area to change a cut left-rear tire; both drivers continued but Clanton was nipped for fourth by Dan Schlieper of Sullivan, Wis., and Davenport placed sixth.

Saturday’s grand finale program, which includes B-Mains, a last-chance race and the 100-lap USA Nationals plus a full show for Cedar Lake’s NASCAR Late Models, is scheduled to begin with hot laps at 6:30 p.m.