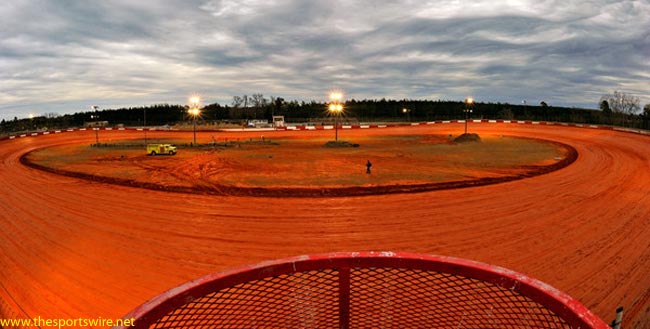 The national tour was set to compete at the three-eighths-mile oval as part of the track’s rescheduled ‘Winter Freeze’ program, a doubleheader featuring dirt Late Models and the All-Star Circuit of Champions Sprint Car Series that was rained out on its original date in February. Griffin added a World of Outlaws sanction to the full-fender portion of the twinbill after the WoO LMS’s lone 2011 visit to Screven on March 26 was washed out by thunderstorms.

Griffin scheduled a blockbuster program for Nov. 2 – upping the normal WoO LMS first-place prize to $12,000 to go along with an All-Star Sprint Car A-Main paying $10,000 to win – but reluctantly decided to cancel the event after market forces combined with the mid-week date forced him to reevaluate its financial viability.

“I would like to apologize for making a very bad rescheduling decision on our inaugural Winter Freeze (event) rain-out back in February 2011,” Griffin told fans and racers in an open letter announcing the cancelation. “Unfortunately, the (Nov. 2) show will be cancelled due to many fans expressing that a Wednesday night will be impossible to support. November 2 is a work night – and most of all a school night for the kids – and without that support running this show would be a bad financial decision for the track.

“I understand that this may upset many fans that were planning to come down to attend this show prior to the World Finals at (The Dirt Track at) Charlotte (on Nov. 3-5). At first, this seemed to be the best time to catch the 410 Sprinters that rarely make their way south. However, from the response that I have received through phone, e-mails and personal contact, most have said that it is too difficult to plan to attend a show on a week night (in November).”

Griffin said that fans and racers holding rainchecks from February’s ‘Winter Freeze’ and/or the rained-out WoO LMS event on March 26 will be able to use them for entrance for any remaining events in 2011 at Screven or for the bigger-and-better 2012 version of the ‘Winter Freeze,’ which will run from Feb. 9-11 and headline the WoO LMS in a season-opening 60-lap, $20,000-to-win A-Main.

Complete details of the 2012 ‘Winter Freeze’ are still being formulated, but Griffin has announced that the weekend will also include the All-Star Circuit of Champions Sprint Car Series running $5,000-to-win events on both Fri., Feb. 10, and Sat., Feb. 11. WoO LMS time trials and heat races will take place on Friday evening and last-chance events and the ‘Winter Freeze’ A-Main will run on Saturday night.

Additional info on Screven Motor Speedway can be obtained by logging on to www.screvenmotorspeedway.com.

With the cancelation of the Nov. 2 card at Screven, the WoO LMS now heads into the season-ending Lowes Foods World of Outlaws World Finals presented by Tom’s Snacks, Coca-Cola and Nature’s Own on Nov. 3-5 at The Dirt Track at Charlotte in Concord, N.C., with Rick Eckert of York, Pa., leading the circuit’s standings by 14 points over two-time defending champion Josh Richards of Shinnston, W.Va. A pair of 50-lap, $10,000-to-win A-Mains comprise the Late Model portion of the World Finals, which also includes doubleheaders for the WoO Sprint Car Series and the Super DIRTcar Series for Big-Block Modifieds.