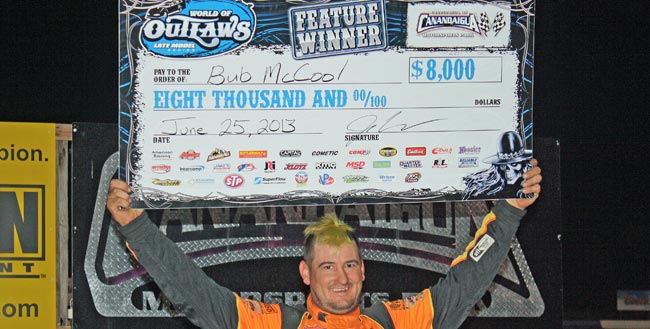 CANANDAIGUA, NY – June 25, 2013 – Bub McCool of Vicksburg, Miss., charged from third to first on a lap-29 restart and held off Tim Fuller of Watertown, N.Y., down the stretch to capture Tuesday night’s World of Outlaws Late Model Series Sweeteners Plus 40 at Canandaigua Motorsports Park.

Racing just five days after celebrating his 36th birthday, the 2012 WoO LMS Rookie of the Year broke through for his first victory of the season and the second of his career on the national tour. The $8,550 triumph culminated a successful swing through New York and Canada for McCool, who finished no worse than eighth in four starts behind the wheel of his family-owned Victory Circle car.

“We’ve been working hard at it,” said McCool, whose victory came two nights after he matched his season-best finish with a third-place run at Cornwall (Ont.) Motor Speedway. “I think we found a little something on the car that’s working good and the last couple nights we’ve done a little more to it. I felt like we may have figured something out.”

Fuller, 45, equaled his top finish of ’13 on the WoO LMS after starting 11th in the Kennedy Motorsports Capital Race Car. The former DIRTcar big-block Modified regular at Canandaigua vaulted from fourth to second on the eventful lap-29 restart and raced within striking distance of McCool for the remainder of the distance but fell short at the checkered flag by 0.588 of a second.

Clint Smith of Senoia, Ga., who sailed around the outside of Eckert to take the lead on lap eight and held the top spot until McCool gained control on lap 30, faded to an eighth-place finish after his soft tires gave out during the race’s second half.

The pivotal moment of the A-Main came after the caution flag waved for the first time on lap 29 for Rick ‘Boom’ Briggs of Bear Lake, Pa., who slowed between turns one and two. As Smith, whose commanding early lead had shrunk to almost nothing over Eckert just before the caution, struggled to fire off on the restart, McCool turned up the wick and surged past both Eckert and Smith to assume command as lap 30 was scored.

“When (Smith) and Eckert both took off (at the start) they probably got half a track or better on us,” said McCool, who started third. “I couldn’t even see ’em up there no more, so I was just gonna try to drive my line and hold on to third there.

“We started running ’em down, and then we had the caution (on lap 29). I tried to have my right-rear in the wet up there on the top (of turn four) when (Smith) fired (on the restart) and cut down and have a little more run than he did. I did on Eckert, and then we got by (Smith) when he slowed down getting into one.”

McCool’s strategy of cooling his jets until later in the race on the sprawling half-mile oval proved prescient.

“I knew they was a little softer than I was on tires,” McCool said of Smith and Eckert, “and if I could just keep it straight and keep it under me we’d be O.K. because I had a good car. It all ended up working out good.”

Fuller, who has one career DIRTcar big-block Modified feature win at Canandaigua, attempted to challenge McCool during the final circuits but couldn’t summon enough speed.

“I could run with him, but I didn’t know how I was gonna pass him unless he screwed up in lapped traffic,” said Fuller, whose winless streak reached 119 races since his last WoO LMS score on June 17, 2010, at Merrittville Speedway in Thorold, Ont. “When it’s that black and this shape of track you just gotta keep turning left and not scrub any speed, and he was doing that real well. I could run with him but then I’d lose the nose, and then I’d try to get down lower and I couldn’t make no ground up that way.

“He was good,” he added. “Maybe more laps would’ve helped, but he ran a good race.”

Fuller credited his strong run from mid-pack to his pre-race selection of Hoosier rubber.

“We had the right tires,” said Fuller. “In the beginning of the race those 1325s (compound) took off really well, but in the end when it got black and shiny and slippery the 1425s were the tire to have – and the top three had ’em.”

Bagley, who celebrated his 27th birthday on June 10, moved forward from the seventh starting spot to nail down his career run on the WoO LMS. He sat sixth when the caution flag flew on lap 29, then picked up two spots on the restart and overtook Smith to reach third on a lap-31 restart following a caution flag for debris.

“That last restart ‘Cat’ (Smith) couldn’t get going,” said Bagley, who made his first-ever start at Canandaigua. “We got by him, but that just put a distance between us and Fuller and Bub. We started to get back to them at the end with some help from lapped traffic, so I would’ve loved 50 laps. I was real comfortable riding out there.”

WoO LMS points leader Josh Richards of Shinnston, W.Va., and Darrell Lanigan of Union, Ky., who entered the evening riding a two-race win streak after sweeping the tour’s Canadian swing, experienced rare subpar nights. Richards started 12th and was never a factor while struggling to a 13th-place finish – a run that cut his points lead to eight markers over Clanton – and Lanigan backed up from the sixth starting spot to a 14th-place finish.

Smith’s lap of 18.262 seconds in Ohlins Shocks Time Trials topped the night’s 23-car field. It was his seventh career WoO LMS fast-time honor but first since May 7, 2010, at Lincoln (Ill.) Speedway

Heat winners were Smith, Eckert and Lanigan, who rallied to capture the third prelim after officials penalized him from the pole starting spot to third place for firing early at the initial green flag. No B-Main was run, but Fuller earned $740 for winning a special 4-lap dash for drivers with DIRTcar big-block Modified roots over McCreadie, Billy Decker of Unadilla, N.Y., and Coffey.

For live blog-style updates including news, notes and results from tonight’s action, click the ‘Read More’ button below. Be sure to refresh your browser throughout the night to read the latest information.

9:50 p.m. – Bub McCool charged from third to first on a lap-29 restart and held off Tim Fuller down the stretch to capture the Sweeteners Plus 40 — his first WoO LMS triumph of the season and the second of his career.

Clint Smith, who passed Eckert for the lead on lap eight and held the top spot until McCool took control on lap 30, faded to an eighth-place finish.

8:45 p.m. – The 25-lap Sportsman feature just rolled onto the track, so WoO LMS teams are now busy making final preparations for the 40-lap A-Main, which is sponsored by Sweeteners Plus, the local company owned by Carl Myers, who fields the race cars driven by his step-son Vic Coffey and Tim McCreadie. The eight-minute horn to line up the A-Main will be blown midway through the Sportsman headliner.

8:35 p.m. – Clint Smith, Rick Eckert and Darrell Lanigan captured the three 10-lap heat races…. Smith held off a challenge from Tim McCreadie to win the first preliminary….Eckert dominated the second heat, sticking like glue to the inside line to easily outdistance Bub McCool…. Lanigan flashed some serious strength in taking the third heat. After being penalized by officials from his pole position starting spot to third on the grid for firing early on the initial start, the defending WoO LMS champion roared around the outside of both Josh Richards and Billy Decker on the third lap to take the lead and dominate the remainder of the distance…. Tim Fuller managed only a fourth-place finish in his heat, but he won an added 4-car, 4-lap dash for New York drivers with big-block Modified roots. He beat McCreadie, Decker and Vic Coffey to the finish line for a cool $740 payday in a race organized by Canandaigua promoter Jeremie Corcoran…. Eckert drew the pole position in the A-Main redraw a short time ago. Decker will start alongside him on the front row….

7:35 p.m. – The turnaround that Clint Smith began with a runner-up finish on Sunday night at Cornwall Motor Speedway appears to be continuing as the veteran from Senoia, Ga., ripped off the fastest lap of Ohlins Shocks Time Trials, touring the half-mile oval in 18.262 seconds.

It was Smith’s seventh career fast-time honor on the WoO LMS and first since May 7, 2010, at Lincoln (Ill.) Speedway.

6:40 p.m. – Hot laps for tonight’s 23-car field are moments away. Sun is still shining through puffy clouds, so it’s looking more and more hopeful that tonight’s racing program will avoid any problems with Mother Nature.

Fuller’s Kennedy Motorsports teammate, Shane Clanton, was among a group of visitors to Fuller’s home base that included Clint Smith, Chub Frank, Bub McCool, Darrell Lanigan and John Mason. Fuller split the teams up between his garage and his uncle’s nearby to work on their equipment during the day, and then all the drivers and crews made their way over to Fuller’s Last Lap Bar & Grill, which he opened up a couple years ago as a side business, to enjoy some drinks and play some bar games.

During the day, McCool’s 8-year-old son, ‘B2,’ got a rise from the teams working at Fuller’s shop when he emerged from the woods holding a baby deer in his arms. The boy found the fawn while riding a four-wheeler.

By the way, the deer was returned to its spot in the woods — though ‘B2’ would’ve loved to keep it as a pet. “He was all over me to bring it home,” said McCool. “I don’t think having that thing in the hauler would’ve been real good.”

4:50 p.m. – Summer has definitely arrived as hot, muggy conditions are prevailing today at Canandaigua. The weather forecast lists a chance of rain, but it appears so far that thunderstorms are brewing up well to the east and south of the speedway, which is currently underneath partly cloudy skies.

Tonight’s roster will include a cast of characters that has entered all three of this week’s WoO LMS events in New York and Canada — the 11 WoO LMS regulars plus Dan Stone, Billy Decker, Larry Wight, John Mason, Greg Oakes and Gil Tegg Jr. — plus several others, including 2008 WoO LMS Rookie of the Year Vic Coffey, Rick ‘Boom’ Briggs and John Volpe.