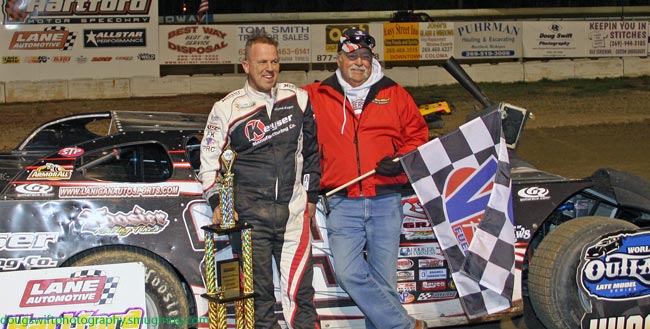 The 40-year-old star continued his spectacular early-season surge, winning for the third time in the six events that have been contested so far on the national tour. He missed the season-opening race in February due to a medical issue but has quickly roared back into title contention with four consecutive top-three finishes.

“I’m telling you, right now we’re on a roll,” said Lanigan, who earned $10,775 for a victory that gave him sole possession of third place on the WoO LMS win list since 2004, with 22 career wins. “The Rocket Chassis is awesome, the Cornett motor is awesome, the crew’s doing a great job and I’m feeling better than I have in a while after getting a cortisone shot for my lower-back (which has been causing him discomfort due to the fractured tailbone recently found by doctors). Everything is just going great.”
{vimeo}23074097{/vimeo}
Lanigan discovered an extreme outside line around the sprawling 9/16th-mile oval before any of his rivals and used it almost exclusively to sweep through the top five. He completed his charge by passing pole sitter Jason Feger of Bloomington, Ill., for the lead on lap 17.

“I knew I had a good car at the beginning, but they kind of got me bundled up there on the bottom,” said Lanigan, who moved to fourth place in the WoO LMS points standings, just 38 points behind leader Josh Richards of Shinnston, W.Va. “I couldn’t go nowhere, so I said, ‘I’m just going to the top.’ And I’ll tell ya, that thing was a rocket on the top.”

The remainder of the distance belonged to Lanigan, who pulled away from the field following the race’s second and final caution flag on lap 24. The 2008 WoO LMS champion crossed the finish line 3.859 seconds – nearly a full straightaway – ahead of Feger, who registered a season-best runner-up outing in his Bob Pierce-built car.

“Man, that guy is on fire right now,” the 32-year-old Feger said of Lanigan. “He passed me and took off there. It was his night.

“It’s not very often I get passed on the top side, but that’s part of the disadvantage of leading – you don’t know who’s coming behind you. But I don’t know if I would’ve been able to hold him off even if I could’ve gotten to the top. We’re just happy to run second finally. We’ve been fast lately but haven’t had any good results.”

Richards, the two-time defending WoO LMS titlist and current points leader, finished third, but he had to rally during the second half of the A-Main after falling from third to fifth when he slid high between turns one and two on the lap-24 restart. He finally secured third place on lap 46 by passing outside pole sitter Tim McCreadie of Watertown, N.Y., who settled for a fourth-place finish that marked his first top-five run of the 2011 tour.

McCreadie’s Sweeteners Plus Racing teammate, Vic Coffey of Caledonia, N.Y., completed the top five. The race’s third starter recorded a season-best finish and also earned the $500 WoO LMS ‘Bonus Bucks’ cash for being the highest-placing driver who hasn’t won a tour A-Main and wasn’t ranked among the top 12 in the points standings entering the event.

Tim Fuller of Watertown, N.Y., who debuted a self-owned effort sponsored by Pennsylvania’s BPG Inc., brought out the race’s first caution flag on lap five when he stopped on the backstretch. He drove into the pit area and did not return due to a possible lost cylinder.

Jeep VanWormer of Pinconning, Mich., suffered the feature’s toughest break. He smacked the turn-three wall on lap 24 and was towed off the track just moments after his outside-groove assault had put him in sixth place.

A field of 41 cars was signed in for the evening’s action.

Heat winners were Feger, Eckert, Doar and Lanigan. The B-Mains were captured by Fuller and WoO LMS rookie John Lobb of Frewsburg, N.Y.

The WoO LMS moves to Bluegrass Speedway in Bardstown, Ky., on Saturday night (April 30) for the ninth annual ‘My Old Kentucky Home Shootout.’ A 50-lap A-Main paying $10,000 to win tops the evening’s agenda.