• Lanigan Keeps On Rolling At Bluegrass 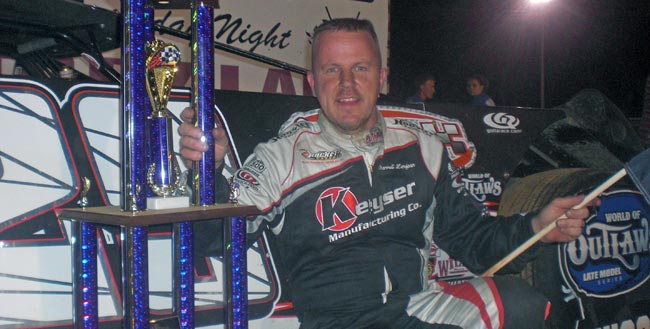 Racing at a half-mile oval just two hours from his home, Lanigan completed a sweep of the World of Outlaws Late Model Series’s weekend doubleheader with a victory in the caution-free 50-lap ‘My Old Kentucky Old Home Shootout.’

Lanigan, 40, led the entire distance of the ninth annual event after starting from the pole position in his GottaRace.com Rocket car. He repelled challenges from two-time defending WoO LMS champion Josh Richards of Shinnston, W.Va., and Scott James of Greendale, Ind., to earn his tour-leading fourth win in six starts this season.

“It’s good to come back here to Kentucky and win one,” said Lanigan, who captured the inaugural ‘My Old Kentucky Home Shootout’ at Bluegrass in 2003. “We didn’t qualify very well (30th after timing late in the session), but we ran a good heat race (finishing second) and then drew the number one (for the feature). That definitely helped, but like I’ve said – the car’s been good all year, and we’re just doing everything we can to win every race and get back in the points.”

Lanigan, who missed the WoO LMS season opener on Feb. 17 at Volusia Speedway Park due to a medical issue and finished 15th in his first tour outing of 2011 two days later, hasn’t finished outside the top three since leaving the Florida track. He has climbed all the way back to fourth in the points standings and, with Saturday’s $10,775 score, has already topped $60,000 in earnings.
{vimeo}23101836{/vimeo}
Coming off a spectacular charge to victory using the outside lane on Friday night at Hartford (Mich.) Motor Speedway, Lanigan utilized a more methodical approach at Bluegrass. He had to calmly hold his line and avoid catching lapped cars throughout a race that was completed without interruption in just over 14 minutes.

Lanigan crossed the finish line 0.479 of a second ahead of James, who slipped underneath Richards for the runner-up spot on lap 37 and marched on to a career-best performance on the WoO LMS driving the Riggs Motorsports Rocket.

Lanigan, who competed all weekend virtually free of the lower-back pain that has plagued him throughout the season after receiving a cortisone shot for his fractured tailbone, recognized that the Bluegrass surface had become locked down and played the conditions to perfection.

“I was rubber racing,” said Lanigan, who sits third on the WoO LMS win list since 2004 with 23 career victories. “I didn’t really want to go up there and pressure those lapped cars because when you get on a guy’s bumper it takes the air off your nose, so I just rolled out of it in the corners and closed back up on the straightaways.

“I knew that somebody was close, but I didn’t know who it was and I knew it would be hard to pass me if I didn’t make a mistake or get myself messed up with lapped cars.”

James, 39, never drew close enough to offer Lanigan a serious challenge. His hard-compound tire choice helped him come on as the race progressed but he couldn’t pull off his first-ever WoO LMS triumph.

“I’m happy,” said James, whose previous best finish in WoO LMS action was third, on both Feb. 17 and 19, 2005, at Volusia Speedway Park. “It would’ve been nice to get it tonight, but any time you can come out of here with a top three in this crowd your car’s pretty good.”

Richards, meanwhile, fell short in his bid to reach Victory Lane for the first time in WoO LMS competition this season. He moved from the fourth starting spot to second by lap two and threatened Lanigan several times, but his hopes disintegrated after he slid high in turn four and ceded the bridesmaid position to James.

“I felt like we were way better than Darrell,” said Richards, who has a 32-point edge over Lanigan in the WoO LMS standings. “I got up to him and I got clear up behind his quarter-panel (on lap 37), but I got a little bit of an aero-push so I just kind of tried to carry it to the outside of (turn) four. I thought the track was rubbered wider than it was, but it was really narrow and I was like, ‘Uh oh, that was bad.’ I didn’t realize Scott James was that close and he got by.

“We were going for the win,” he added. “I’m really hungry for a win right now, so I tried to make something happen. It didn’t work, but we still ended up third out of it – and knowing we were that close, or even better, than a guy who’s been dominating makes me feel a lot better.”

Jewell, who turns 53 in July, was the feel-good story of the night. He slipped backward one position to finish fourth after starting on the inside of the second row but was still beaming following the checkered flag.

“I took a gamble and ran a harder tire and those guys sort of got away at the start,” said Jewell, an accomplished Midwestern racer who registered a career-best WoO LMS finish. “But then I moved up there to the top, got faster and got some momentum, and I started running those guys (Lanigan and Richards) down. I thought, Man, I’ve got something here. But Scott slid under me (for third) before I got down there in that rubber and then we were done.

“I had a good car all night, so I was real pleased. These guys are on top of their game – they’re professionals, and this is their living. We’re just kind of weekend warriors, so I’m just glad to get to run with them.”

The race’s only noteworthy casualty was Tim Fuller of Watertown, N.Y., who relinquished fourth place on lap four due to a broken rearend in his BPG Inc.-sponsored car.

A field of 42 cars assembled for the event, which kicked off the 2011 season at Bluegrass.

James was quickest in Ohlins Shocks Time Trials with a lap of 15.593 seconds. It was his first-ever fast-time honor on the WoO LMS.

Heat winners were Richards, Jewell, Kent Robinson and Hubbard. The B-Mains were captured by Jonathan Davenport of Blairsville, Ga., who did not record a lap in time trials due to a right-front wheel problem, and Clint Smith of Senoia, Ga.