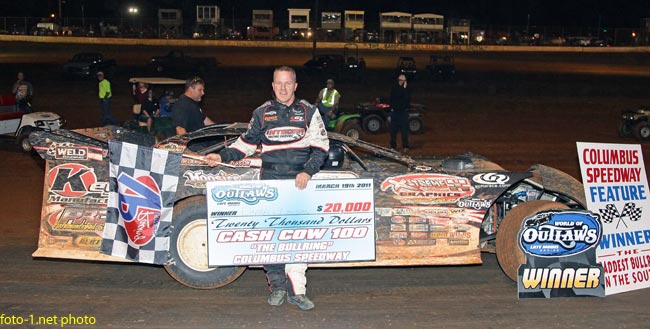 Simultaneously ending his long pursuit of an extra-distance victory on the World of Outlaws Late Model Series and beginning a comeback from his disappointing start to the 2011 season, Lanigan drove forward from the 19th starting spot to capture the inaugural ‘Cash Cow 100’ before a packed house of fans at The Bullring.

Lanigan, 40, of Union, Ky., earned $20,675 for his first-ever win in a 100-lap WoO LMS event – after coming tantalizingly close to a checkered flag in numerous century grinds over the past three years. The 2008 tour champion did it the hard way, charging through the field on a demanding high-banked, one-third-mile oval to grab the lead for good on lap 64 with a pass of Crane, Mo.’s Will Vaught.

“The car was just awesome in the feature tonight,” said Lanigan, who gained entry to the weekend’s headliner by steering his GottaRace.com Rocket car to victory in the first B-Main on Saturday night. “We struggled a little bit last night in the heat races when we were trying a few things, but we made some changes today and man, it came on in the feature. To run the consie and come back and win is just unbelievable.”

Vaught, 24, finished second in his Victory Circle machine after starting fourth and leading laps 15-31 and 62-63. It was a career-best placing on the WoO LMS for the young talent, who overtook Dirt Late Model Hall of Famer Billy Moyer of Batesville, Ark., for the runner-up spot coming to the white flag.

Moyer, who started third in his own Victory Circle car, settled for a third-place finish while his 23-year-old son, Billy Moyer Jr., advanced from the 13th starting spot to register a career-high WoO LMS placing of fourth in another Victory Circle mount. Polesitter Austin Hubbard of Seaford, Del., completed the top five in Dale Beitler’s Rocket car after surviving a near-disastrous homestretch scrape with Vaught and Josh Richards of Shinnston, W.Va., on lap 11 as the trio battled for the lead.

Richards, 23, led more laps than any other driver, pacing the field for 44 circuits after starting from the outside pole. He led laps 1-14 before being overtaken by Vaught and then rallying to regain the top spot on lap 32, but his bid for a second consecutive 100-lap win on the WoO LMS effectively ended on lap 61 when he was sent spinning in turn two as a result of contact from Clint Smith of Senoia, Ga., whom Richards had just lapped.

Richards restarted at the rear of the field, but the two-time defending WoO LMS champion could only climb to ninth at the finish.

“We were running for the win and finally I had to get by (Smith), so I let off, went to slow down to get in the corner and he ran into our left-rear,” said Richards, who earned his first-ever win in a 100-lap event in the last long-distance WoO LMS race, on Sept. 1, 2010, at Mohawk International Raceway in Akwesasne, N.Y. “I love Clint to death and I’m sure he probably didn’t mean it, but that’s what happened.

“It’s frustrating because we had a real awesome car. I don’t know if we could’ve held on for the win or not, but I felt like we could’ve been in contention.”

Lanigan, who had just begun to challenge Vaught for second when Richards lost control of his Rocket car, scored his 20th career win on the WoO LMS win. It gave him a major boost in his uphill climb in the tour points race after he was forced to miss the season opener on Feb. 17 at Volusia Speedway Park in Barberville, Fla., due to medical problems associated with a cyst on the base of his tailbone. He vaulted from 30th to 14th in the points standings, 96 points behind Moyer’s leading total after three events.

“We’re down a little bit in the points, but if we keep winning ’em it’s gonna come back,” said Lanigan, who reported that his lower back was sore following the physical race.

Vaught, who earned the $500 ‘Bonus Bucks’ cash for being the highest-finishing driver who hasn’t won a WoO LMS A-Main, completed a memorable weekend with his bridesmaid finish. He finished second in a heat race on Friday night after being forced to start ninth due to a flat left-rear tire during time trials and was a contender throughout the Cash Cow 100.

“At the start of the race we had a real good car and got out to the lead, but we put a little too soft of a tire on,” said Vaught. “I knew it was giving up when I got to lapped traffic and couldn’t pass them. Then I was just trying to make it last a hundred laps.

“We ended up having a real good race with Billy Moyer – and to pass him for second right at the end was incredible.”

Moyer, 53, didn’t seem disappointed after losing second to Vaught with just one lap remaining. He wanted to talk less about his run and more about his son’s impressive performance.

“I’m real proud of Junior,” said Moyer, the winner of the last WoO LMS event at Columbus, in March 2007. “When he come trucking by me there (for fourth on lap 56) I think he had a better hot rod than I did. But as the track changed I don’t think he chased the track just right. He still ended up fourth – and with this crowd here, that’s a heck of a job for him.”

The race’s three caution flags all came within a three-lap span after Richards’s spin created the first slowdown. Friday night’s fast-timer, Chris Wall of Holden, La., stopped on the homestretch on lap 64, and on the ensuing restart Chub Frank of Bear Lake, Pa., saw his bid to enter the top five end abruptly when his car’s right-rear wheel broke off between turns three and four.

Finishing in positions 6-10 were Mike Marlar of Winfield, Tenn., who ran in the top five during the race’s first half; 21st-starter Earl Pearson Jr. of Jacksonville, Fla.; 22nd-starter Dale McDowell of Chickamauga, Ga.; Richards; and Steve Francis of Ashland, Ky., who broke into the top 10 late in the distance.

Saturday night’s program began with a pair of 20-lap B-Mains won by Lanigan and Tim McCreadie of Watertown, N.Y., who only managed a quiet 12th-place finish in the Cash Cow 100.

Note: Feger, Coffey and McDowell were penalized to the rear of the field for the start after reporting late to the pre-race staging area

Note Cash Cow 100 order of finish updated on 3/26 after a review of computer scoring determined that Jason Feger finished one lap down rather than two as originally posted…change officially moves Feger from 19th to 17th, Hollingsworth from 17th to 18th and Fuller from 18th to 19th

FOLLOW THE ACTION ON TWITTER: Fans can keep up-to-date with the World of Outlaws Late Model Series online and through text messages on cell phones via Twitter, the internet’s fast-growing social-networking and micro-blogging website. Updates are provided to Twitter ‘followers’ of the WoO LMS throughout each race night, and fans also receive breaking news and interesting notes from the tour.

More than 3,200 fans are now WoO LMS ‘followers’ on Twitter. To sign-up and receive updates anywhere at anytime, visit http://twitter.com/WoOLateModels.