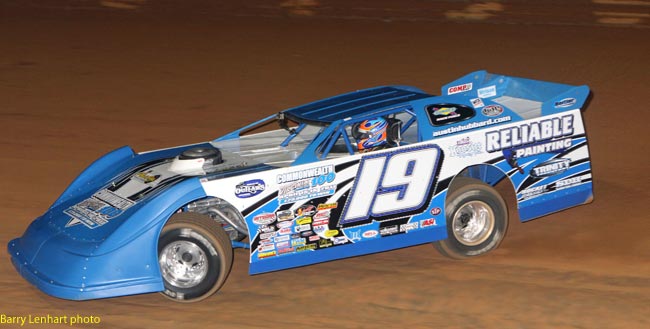 The 100-lap A-Main is scheduled for Saturday night (April 16), but with a wet forecast looming the event’s Sunday raindate could be put into effect. VMS and WoO LMS officials will meet on Saturday morning after analyzing the weather conditions to determine the status of the Commonwealth 100 weekend’s headline show.

A talent-laden field of 43 cars was signed in for Friday night’s action, which set the complete 26-car starting field for the Commonwealth 100. Two 20-lap B-Mains originally scheduled for Saturday evening were added to Friday’s card in an effort to streamline the weekend’s finale whenever it is contested.

Also winning heat races were Darrell Lanigan of Union, Ky., who led last year’s Commonwealth 100 until blowing a tire on lap 91; Scott Bloomquist of Mooresburg, Tenn., who beat Rick Eckert of York, Pa., by a full straightaway margin; and Steve Shaver of Vienna, W.Va. Lanigan and Bloomquist are the only A-Main victors so far this season on the WoO LMS, with each boasting two victories.

Hubbard shined brightest during Friday’s competition, winning a preliminary to move one step closer to Victory Lane in a race he considers one of his biggest of the season. After failing to qualify through a heat for last year’s inaugural Commonwealth 100 and finishing a disappointing 23rd, he’s back with a more relaxed approach.

“It’s just another race – that’s what I’m telling myself,” said Hubbard, the 2010 WoO LMS Rookie of the Year and the 2007 Late Model track champion at VMS. “I definitely want to win this one, but I’m just trying to treat every race the same this year and not do anything stupid, and so far it’s working out.”

“We started on the outside and got a better run into one and it was kind of smooth sailing from there,” said Hubbard, who drove Dale Beitler’s familiar Reliable Painting Rocket No. 19. “(Crew chief) Robby (Allen) definitely had the car right and that new Cornett (engine) we put in was working great, so we’re excited. We got a car and motor combination that’s right so I’m confident about our chances tomorrow.”

Friday’s program wasn’t as good to two-time defending WoO LMS champion Josh Richards of Shinnston, W.Va., who was forced to make a rare B-Main appearance after missing the cut in the third heat. He won the second B-Main and will start 18th in the Commonwealth 100.

Chub Frank of Bear Lake, Pa., suffered the worst luck of the WoO LMS regulars. After falling less than a car length short of transferring through his heat, the 49-year-old veteran led most of the first B-Main until falling back and ultimately pitting due to a deflating left-rear tire.

Reigning DIRTcar Summer Nationals champion Jason Feger of Bloomington, Ill., was fastest in Ohlins Shocks Time Trials, turning a lap of 17.086 seconds. It was his second career WoO LMS fast-time honor and came in his first-ever appearance at VMS.

Feger tumbled backward on the first lap of his heat race, however, due to a tire compound choice that was too hard and was involved in a mid-race tangle with Bub McCool of Vicksburg, Miss., that forced him to make a pit stop. He missed transferring by three spots but came back to take the runner-up position in the first B-Main, which was won by Jeremy Miller of Gettysburg, Pa.

The 30-lap ‘Rumble on the River’ Non-Qualifiers (paying $3,000 to win) and the Commonwealth 100 remain to be run on Saturday or Sunday, pending an update from track and series officials on Saturday morning.

For the latest information log on to www.worldofoutlaws.com and www.vamotorspeedway.com or call the track office at 804-758-1VMS.