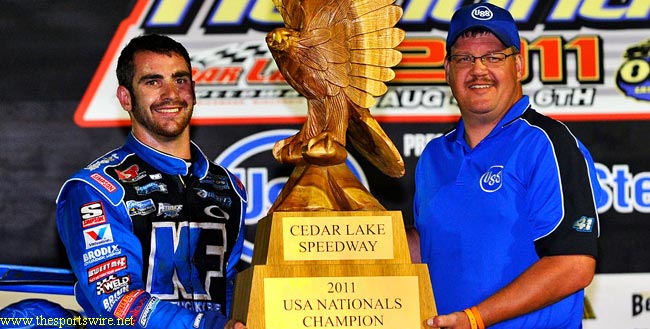 NEW RICHMOND, WI – Aug. 6, 2011 – Josh Richards finally has a victory in a crown-jewel dirt Late Model event on his resume.

The 23-year-old star’s breakthrough performance came on Saturday night in the 24th annual USA Nationals presented by U.S. Steel at Cedar Lake Speedway, a three-eighths-mile oval that will forever be close to his heart.

“It hasn’t even sunk in yet,” Shinnston, W.Va.’s Richards said when asked to describe his emotions following a 100-lap World of Outlaws Late Model Series triumph worth $50,125. “This place has always been real special to me. Back in 2000 whenever Davey Johnson was driving for us (his father Mark’s Rocket Chassis house car) I remember coming here and watching the (USA Nationals). I was just in awe. I just fell in love with this track at a young age.

“To finally get (a crown-jewel win) – and here at Cedar Lake – it really means a lot.”

Richards, who witnessed his father’s familiar No. 1 reach Victory Lane in the 2000 USA Nationals with Johnson behind the wheel, returned his dad to the spotlight at Cedar Lake with a savvy performance. He spent more than half the distance chasing polesitter Jason Rauen of Farley, Iowa – a 31-year-old seeking a monumental upset win in his first-ever USA Nationals and WoO LMS starts – before diving underneath the upstart to grab the lead on lap 78.

The remainder of the distance served as a valedictory ride for Richards, who beat two-time USA Nationals winners Brian Birkhofer of Muscatine, Iowa, and Jimmy Mars of Menomonie, Wis., to the finish line despite driving a car that sported significant left-side body damage from a lap-65 tangle that nearly ended his bid. It was his fifth WoO LMS win of 2011 and the 33rd of his career.
{vimeo}27394933{/vimeo}
Rauen, who led laps 1-77, settled for a fourth-place finish, nearly a half-lap behind Richards at the checkered flag. WoO LMS regular Darrell Lanigan of Union, Ky., completed the top five after starting 18th, nursing home a car that was hampered by an overheating engine caused by a hole in its radiator.

Richards’s long-awaited first win in one of dirt Late Model racing’s biggest events came in his eighth year of action in the full-fender division. After several near-misses in majors, he seemed to finally uncover the secret to success on a grand extra-distance stage, pushing his machine just hard enough to stay within striking distance of the leader and then making his move in the race’s late stages.

“That track condition is definitely what I prefer,” Richards said of Cedar Lake’s fast surface, which was left heavy after a late-afternoon thunderstorm caused a one-hour delay in the start of the evening’s program. “You gotta be aggressive, but yet somewhat smooth. Momentum is the biggest key on a track like that. You gotta do your best to try to get a rhythm that’s comfortable, but yet you’re fast and not killing your tires.”

Richards, who started fourth, swapped second place twice with Mars early in the 100 before securing the spot on lap 30. The two-time defending WoO LMS champion then found a formidable foe in Rauen, who had the capacity crowd thinking upset as he maintained command with cushion-pounding style.

But Richards wasn’t going to be denied a milestone victory.

“I knew that (turns) one and two was getting treacherous, so I just figured there was enough brown off the bottom of two that if I could stick down there and (Rauen) made a mistake, then we could go,” said Richards, whose father’s car was powered by a Roush-Yates Ford engine for the second straight WoO LMS event. “I think when we moved down, he started to move down and he slipped up one time off two. I was able to get a run off of two (and grab the lead).

“I wasn’t gonna let up from then on. I just kept looking at the scoreboard and counting the laps down.”

Richards wasn’t challenged once in front, driving away to defeat Birkhofer by 2.009 seconds. But the two drivers did get close midway through the race while battling for second – an encounter that provided Richards his most notable scare.

On lap 65, Birkhofer drove to the inside of Richards entering turn one. Contact between the two cars caused Richards to slide sideways in turn two, triggering a chain-reaction scramble that ended with Richards’s good buddy, Jared Hawkins of Fairmount, W.Va., hitting Richards in the left-side door and then rolling to a stop on the inside of the track.

The race’s eighth and final caution flag was put out for Hawkins, who was running fifth at the time but was unceremoniously towed off. Richards managed to keep his car moving and was thus able to restart in second place.

During the caution period Richards drove alongside Birkhofer to express his displeasure with the contact that nearly knocked him from the race. He proceeded to briefly lose second to Birkhofer on the ensuing restart before regaining the position with an outside thrust off turn four on lap 66.

“I have a lot of respect for Brian Birkhofer,” Richards said of the incident. “I guess he just thought that I crowded him up on that restart, but when you’re the second-place guy that’s always your goal – to hold the guy up as long as possible and turn left. I guess he thought I held him up too far and he showed it that next restart and drove in there.

“He’s going for the win just as much as we were, so I can understand. But I guess he kind of lit a fuse a little bit. From then on the only thing I was focused on was that eagle (the wooden USA Nationals trophy), and we finally got it.

“I’ve always wanted to win this race,” he added. “It means a lot to me. We got this one, but there’s a few more on the (crown-jewel) list that I’d definitely like to win.”

Birkhofer, 39, wasn’t happy about the situation with Richards, but he spoke with Richards following the race and conceded that the young standout was a deserving victor.

“I didn’t like how he wasn’t giving me any room on those restarts, so I kinda went in there…I got into him for a reason,” said Birkhofer, who drove his MB Customs car forward from the 24th starting spot to a $20,000 runner-up finish after gaining entry to the A-Main thanks to a provisional berth he held from winning Thursday night’s Dart Corn Belt Clash Series event. “You give me some room, I’ll give you some room. Hey, he did a great job racing, but all I was wanting was a little bit of respect for my space.

“Me and Josh had a good talk afterward, so as far as I’m concerned there’s no problem.

“We just had to better,” he continued. “I got to where I was a little too tight on entry. I got up there and Josh had the better car.”

The 39-year-old Mars, meanwhile, appeared to be a contender for a third USA Nationals crown after starting second and tussling with Richards for the spot during the race’s first half. But one miscue cost him dearly, contributing to his third-place finish.

“I had a really good car and I went and jumped the cushion and wrecked a right-front shock,” said Mars, recalling his slip early in the race that allowed Richards to grab second place. “I don’t know what happened to it, but after that I was never right. I couldn’t drive up on the top like I was. I felt real good up on the top before that.

Rauen crossed the finish line 8.456 seconds – more than a half-lap – behind Richards after pacing the field for 77 circuits. He was understandably disappointed to fall short of a historic upset victory, but fourth place was still a better finish than he ever could have imagined.

“When I started that last restart (on lap 65) I didn’t do what I was doing,” said Rauen. “I started kind of in the middle, and I kind of buzzed the tires and they got a run on me. Then they showed their nose and I tried too hard. It was a little inexperience.”

Rauen paused, and then added, “I thought and thought of it (winning), but of course it didn’t happen. But against this caliber of cars, this is like a win for us. We do this for a hobby, so this is great.”

Brian Shirley of Chatham, Ill., finished sixth, settling for the position after losing fifth to Lanigan on lap 96. Steve Francis of Ashland, Ky., was seventh; defending USA Nationals winner Scott Bloomquist of Mooresburg, Tenn., was a quiet eighth after starting 23rd; Chris Simpson of Oxford, Iowa, took ninth after pitting on lap 44; and Dennis Erb Jr. of Carpentersville, Ill., was the first driver one lap down at the finish in 10th.

Among the notable early retirees was WoO LMS points leader Rick Eckert of York, Pa., who was running fourth on lap 37 when his car slowed in a cloud of smoke due to a busted oil line, and 18-year-old Brandon Sheppard of New Berlin, Ill., who was in fifth place (after climbing as high as third) when a broken fuel pump caused him to stop on lap 64.

Saturday’s program kicked off with a pair of 20-lap B-Mains won by Shirley and Jason Feger of Bloomington, Ill. WoO LMS Rookie of the Year points leader Pat Doar of New Richmond, Wis., captured the 15-lap Last Chance Race to transfer to the USA Nationals.

During the second B-Main WoO LMS regular Clint Smith of Senoia, Ga., was involved in a turn-two tangle that caused his car to flip onto its roof. He suffered a minor injury to his left big toe but was otherwise uninjured.

The WoO LMS will remain in the Midwest for one more night of racing on Monday evening (Aug. 8) at Independence (Iowa) Motor Speedway. The 50-lap, $10,000-to-win event was postponed by rain on its original July 12 date.