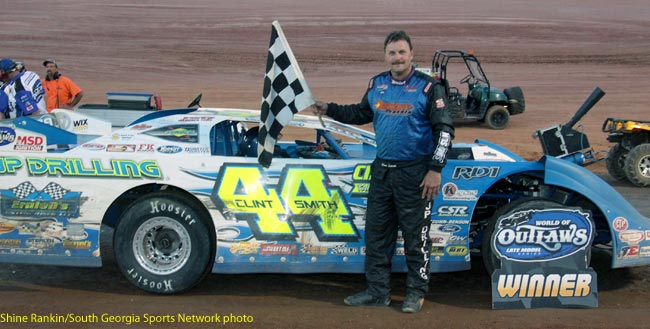 NORMAN PARK, GA – May 8, 2011 – Clint Smith couldn’t have picked a better place to make his long-awaited return to Victory Lane on the World of Outlaws Late Model Series.

With a packed house of his home state fans roaring their approval, the veteran driver from Senoia, Ga., snapped a frustrating 122-race winless streak on the national tour in Sunday evening’s 40-lap A-Main at Needmore Speedway.

Smith, 46, assumed command after race-long pacesetter Vic Coffey of Caledonia, N.Y., spun on lap 23 while attempting to negotiate lapped traffic. The remainder of the distance belonged to the Peach State stalwart, who earned $8,725 for his first WoO LMS triumph since June 17, 2008, at Port Royal (Pa.) Speedway.

Sunday’s Mother’s Day special marked the WoO LMS’s first-ever visit to Needmore, a three-eighths-mile oval that Chris Hunnicutt built on a portion of the 700 acres he uses to farm cotton and peanuts. The facility opened for business in August 2010.

“It was a super day,” said Smith, who added Needmore to the long list of Georgia tracks that he has conquered. “It feels great to win again, especially because it was right here close to the house. I was like the hometown favorite for these fans, so it was pretty cool to win for ’em. The crowd was just great.”

Chub Frank of Bear Lake, Pa., who was bidding to end his own extended losing streak on the WoO LMS, ran second behind Smith for the final 17 laps but was unable to mount a serious challenge. The 49-year-old standout settled for his second consecutive runner-up finish, duplicating his effort the previous evening at Swainsboro (Ga.) Raceway.

Two-time defending WoO LMS champion Josh Richards of Shinnston, W.Va., finished third, rebounding strong from a 19th-place performance at Swainsboro. Rick Eckert of York, Pa., who scored his first win of the season at Swainsboro, remained on top of the tour points standings with a steady fourth-place finish and Tim McCreadie of Watertown, N.Y., finished fifth for his third top-five in the last four A-Mains.

The race’s key moment came on the 23rd circuit when Coffey, who started from the pole position, made contact with the slower car driven by Jill George of Cedar Falls, Iowa, exiting turn four and spun out of the lead. A caution flag was thrown and Coffey immediately steered his Sweeteners Plus machine into the pit area, dejected after missing out on a golden opportunity to record his coveted first-ever WoO LMS victory in what was his 89th career A-Main start.

Smith, who started third but snuck by outside front-row starter Frank at the initial green flag to control second place, was biding his time several car lengths behind Coffey when the incident occurred.

“I hate that Vic got into that lapped car, but you gotta be patient,” said Smith, who registered his 12th career win on the WoO LMS, tying him with Tim Fuller of Watertown, N.Y., for 10th on the tour’s win list since 2004. “These cars ain’t got any bumpers on the left-rear, and when (Coffey) kind of got up under (George) his (fender) flare caught over her left-rear tire. It wasn’t really a big deal – if we had bumpers, they just would’ve bumped and went on. But he got hooked up with her, and that was just a bad deal for him.

“I didn’t want to get tangled up in a crash if something happened there, so I was kind of laying back and letting him race that lapped traffic and I’m glad I did. After that I just stayed patient. I knew if I didn’t get off the bottom, I didn’t think they could pass me.”

With Needmore’s red clay baked hard by a sunny, warm afternoon, drivers had to deal with a line of rubber that formed around the circular track. Smith is known as a master of such conditions and proved his skills again behind the wheel of his J.P. Drilling Rocket car.

“The track was a little challenging,” said Frank, who gained sole possession of fifth place in the WoO LMS points standings with his back-to-back runner-up finishes. “Clint likes this stuff, but it’s not really my style. It’s not me, but we got a good finish out of it.

“I just want to congratulate Clint – he’s a buddy of mine, and I’m glad he got his win. It’s been a long time for him.”

Frank paused. Noting that he’s now riding a 59-race winless streak, he added with a smile, “It’s our turn next, though.”

Ron Davies of Warren, Pa., finished sixth – the highest finish by a 2011 WoO LMS Rookie of the Year contender this season. He earned the $250 Rookie of the Race award as well as the $500 ‘Bonus Bucks’ cash for being the top-placing driver who hasn’t won a WoO LMS A-Main and isn’t ranked among the top 12 in the points standings. The 53-year-old racer moved to 12th in the standings with his run, however, setting him up to receive travel benefits at the next series event.

Finishing in positions 7-10 was Greg Johnson of Bedford, Ind.; Tyler Ivey of Tallahassee, Fla.; WoO LMS rookie John Lobb of Frewsburg, N.Y., who scored a season-best finish after slapping the wall during hot laps; and Fuller, who recorded his first top-10 finish of the season.

Darrell Lanigan of Union, Ky., saw his streak of six consecutive top-three finishes come to an abrupt end when he retired on lap nine with a rare engine failure. He started fourth and was running solidly in the top five at the time.

Lanigan topped the speed charts in Ohlins Shock Time Trials for the second consecutive night, establishing a new track record with a lap of 15.730 seconds during the 24-car qualifying session.

Heat winners were Lanigan, Richards and Eckert. No B-Main was run.

The WoO LMS heads will next head north for a Mid-Atlantic doubleheader, visiting Delaware International Speedway in Delmar on Thurs., May 12, and Winchester (Va.) Speedway on Sat., May 14.

2011 World of Outlaws Late Model Series Point Standings as of May 8 – 9 A-Mains completed (rank/driver/points/deficit to leader):