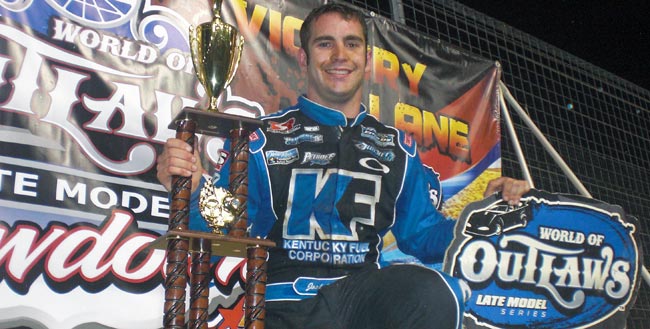 CONCORD, NC – Oct. 12, 2011 – Josh Richards of Shinnston, W.Va., ran away with an important victory in Wednesday night’s 50-lap World of Outlaws Late Model Showdown at The Dirt Track at Charlotte.

The $10,875 triumph was Richards’s ninth of the 2011 World of Outlaws Late Model Series campaign, matching the national tour’s single-season win record established by Scott Bloomquist in 2004. It also was his 37th overall A-Main checkered flag, moving him into a tie with Billy Moyer atop the circuit’s alltime win list (1988-89, 2004-present).

And perhaps most notably, the victory allowed Richards to honor a fallen family member.

“This win goes to my Uncle Roger,” Richards said of his father Mark’s older brother, who passed away last week. “He got my father started in racing and he was a huge fan and a huge supporter of our racing. I’m sure he’s still watching us.”

Richards, 23, left no doubt that he possessed the stoutest machine in Wednesday evening’s field. He roared off the outside pole starting spot to lead the entire A-Main in his father’s Rocket Chassis house car without facing a single challenge.

Richards took the checkered flag 4.362 seconds – a full straightaway – ahead of Vienna, W.Va.’s Steve Shaver, who grabbed second on lap 27 from a high-sliding Jared Landers of Batesville, Ark., and stayed there to the finish in the K&L Rumley Rocket.

WoO LMS regular Clint Smith of Senoia, Ga., advanced from the 12th starting spot to place third in his Rocket, holding off Eckert during the final circuits. Polesitter Tyler Reddick of Corning, Calif., a 15-year-old talent who ran for WoO LMS Rookie of the Year in 2009, held on to take fifth for a career-best tour finish.

“The car was awesome and this Roush-Yates engine is one bad-ass piece,” Richards said of the potent combination he employed to win Charlotte’s World of Outlaws Late Model Showdown for the second consecutive year. “I was able to get out front right at the start, keep the car in clean air and run the line I wanted to.”
{vimeo}30472838{/vimeo}
Richards, who won for the ninth time in the last 20 WoO LMS events and the fifth time in his last eight starts, completed a perfect night of competition at the immaculate four-tenths-mile oval. He also set fast time and led every lap of his heat race

“He was in a class of his own,” runner-up Shaver said of Richards, who easily pulled away from Shaver following late-race restarts on laps 36 and 37. “I was just hanging on for dear life. We were just trying to maintain the top three and not blow the tires off it.”

Smith, 46, was involved in the race’s most intense battle to the finish, racing hard for third with Eckert almost every circuit after the sixth and final caution flag flew on lap 37.

“When we got racing there at the start the track was wide-open and kind of hit-and-miss rough, but around lap 17 or 18 the rain started coming pretty good and I think that kind of slicked the top back up,” said Smith, referencing the light precipitation that fell during the A-Main’s second half. “The last 25 laps you could run around the top and my car was good up there. I think I ran the top side-by-side with Rick Eckert for the last 10 laps.

“It was an excellent race with Eckert,” he continued. “I tried to give him plenty of room to not interfere with the points battle, but yet race hard because I’m trying to race for money too.”

Eckert, 45, was satisfied with a fourth-place finish on a racing surface made heavy and fast by rain that deluged the track early in the week. It was enough to keep his points lead in double-digits with the finish of the season in sight.

“We’re here to win (the championship) and we’re not gonna give up till the end,” said Eckert, who is seeking his first WoO LMS points crown. “If we lose, it’s not from lack of effort.”

The race’s caution flags were caused by John Lobb of Frewsburg, N.Y., who slowed on lap eight; a turn-two tangle on lap eight that involved Dale McDowell of Chickamauga, Ga., and former WoO LMS champs Darrell Lanigan of Union, Ky., and Tim McCreadie of Watertown, N.Y.; Donald Bradsher of Burlington, N.C. (turn-two wall on lap nine); Rookie of the Year points leader Pat Doar of New Richmond, Wis., who stopped on lap 14; Landers, whose car tossed its right-rear wheel as he held third place on lap 36; and Dennis ‘Rambo’ Franklin of Gaffney, S.C. (mechanical trouble while running third on lap 37).

Richards was quickest in Ohlins Shocks Time Trials, topping the 27-car session with a lap of 14.966 seconds. It was his second fast-time honor of the 2011 season.

The next action for the WoO LMS is a season-ending tripleheader – a rescheduled $12,000-to-win event on Wed., Nov. 2, at Screven Motor Speedway in Sylvania, Ga., and the fifth annual World Finals on Nov. 3-5 at The Dirt Track at Charlotte.