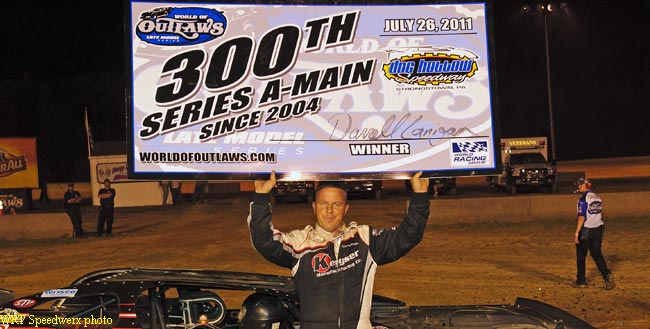 The 41-year-old star ended a nearly three-month checkered-flag drought in a memorable way, inking his name in the record book as the winner of the 300th A-Main contested by the national tour since it was reincarnated in 2004 under the World Racing Group banner.

“It’s pretty cool to win the 300th World of Outlaws feature,” said Lanigan, who has entered all but two WoO LMS events since ’04. “We’ve been running this deal for a long time so it feels good to win a race like this.”

Racing before a big crowd that turned out to witness the biggest dirt Late Model race in Dog Hollow’s history, Lanigan surged forward from the fourth starting spot to grab the lead from Ron Davies of Warren, Pa., on lap 15 and never looked back. He beat WoO LMS points leader Rick Eckert of York, Pa., to the finish line by 1.693 seconds in a caution-free 40-lapper that took just under 12 minutes to complete.

Two-time defending WoO LMS champion Josh Richards of Shinnston, W.Va., finished third after starting eighth. Tim McCreadie of Watertown, N.Y., made a spectacular charge from the 18th starting spot to place fourth, and Davies slipped back to fifth at the finish after leading racing off the outside pole to lead laps 1-14.

Lanigan earned $8,775 for his series-leading fifth win of 2011 but first since April 30 at Bluegrass Speedway in Bardstown, Ky. He was the tour’s hottest driver early in the season with four victories in a five-race span before falling into a slight slump.

“We struggled there a little bit for a couple months and got our program off a little bit,” said Lanigan, who pushed his career win total on the WoO LMS to 24. “We put our program back together pretty much similar to where we had it the beginning of the year and the car’s pretty good right now.

“You get caught up in what everybody else is doing and then you get off of your own stuff. You need to just stick with what you’re doing. We kind of parked by ourselves tonight, did our own thing and kind of gambled on tires, and I think it paid off.”

Driving his GottaRace.com Rocket in Dog Hollow’s first-ever WoO LMS event, Lanigan wasn’t challenged after slipping underneath Davies for the top spot. For most of the race’s second half he maintained an edge of about two seconds over Eckert, who overtook Davies for second on lap 18.

“The car was awesome tonight,” said Lanigan. “I could put it anywhere I wanted to. We had to get around the lapped traffic, but once I got around it I knew they’d (his pursuers) would have to get around it too.”

Eckert, 45, started from the pole position but couldn’t convert the prime spot into his third win of the season. He concluded that his tire-compound choice on his Team Zero by Bloomquist car contributed to his loss.

“I’ve never been here before, so I went with tires that the Hoosier guys were saying (to run),” said Eckert, who is the only driver in WoO LMS history to start all 300 A-Mains contested since 2004. “(Lanigan) snuck by us at the beginning with a little softer left-rear tire, and then when I got mine going I came back towards him at the end but I couldn’t get close enough to challenge him.

“Track position was everything. I probably should’ve gambled on tires.”
{vimeo}26948340{/vimeo}
The 23-year-old Richards made a solid advance in his father Mark’s Rocket house car, reaching third on lap 22 and running there to the finish. He drew within one second of Eckert in the final laps.

“I gave it everything I had there at the beginning just trying to get positions,” said Richards. “I definitely think we had a car that was good enough to win, but we got strung out. I was hoping for a caution to get everything cooled back down and get everybody bunched up, but we never got one.”

No one made more moves than McCreadie, who hustled his Sweeteners Plus Victory Circle car forward using primarily the outside groove around Jim Michny’s four-tenths-mile oval. He picked up five spots on the opening circuit and was 10th by lap 12, but it took him until lap 26 to break into eighth. He spent the remainder of the distance chasing down the cars ahead of him, finally reaching fourth with a lap-38 pass of Davies.

“I could see Josh once I got near the front, so I think that must mean I was at least as good as he was,” said the 37-year-old McCreadie, who ended the race over six seconds behind Richards. “I think a lot of guys didn’t even know there was something up there (on the outside), so I think I surprised them a little to move forward.

“I didn’t work on the car enough after qualifying and in the heat we were terrible, so we just went to work on it. I’m learning that these cars are definitely different than my old (Rocket) cars. It’s a learning process.”

Davies, 53, led a WoO LMS A-Main for the second time in his last three starts but couldn’t maintain that position to the finish in his Mars race car. His fifth-place finish was his best of the season and made him the first 2011 Rookie of the Year contender to crack the top five.

Heat winners were Richards, Davies, Lanigan and Covert. The B-Mains were captured by Shane Clanton of Fayetteville, Ga., and McCreadie.

The WoO LMS continues its three-race swing through western Pennsylvania with the ‘Penn Gold 40’ on Wednesday night (July 27) at McKean County Raceway in East Smethport and a 50-lap, $10,000-to-win event on Sunday evening (July 31) at Eriez Speedway in Hammett.