K-Rob Gets A Victory 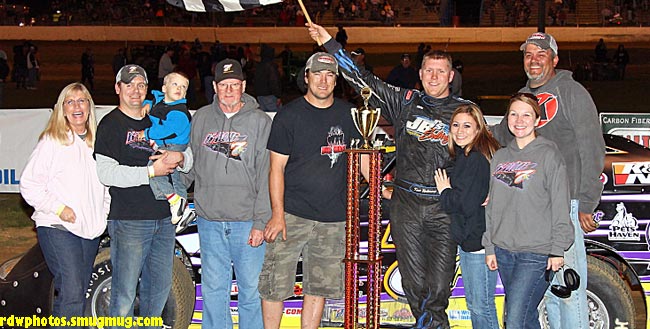 CONCORD, NC – Oct. 15, 2012 – Kent Robinson has taken plenty of lumps during his rookie season on the World of Outlaws Late Model Series, but all the accidents, blown engines and frustrating, struggle-filled evenings on unfamiliar turf have only hardened the talented young racer.

On an idle weekend for the WoO LMS, Robinson proved that he’s learned his lessons well in 2012. He won Saturday night’s unsanctioned ‘Fall 50’ at Florence Speedway in Union, Ky., earning a $5,000 check for the biggest victory of his burgeoning dirt Late Model career.

Robinson, 25, of Bloomington, Ind., was reinvigorated by the triumph, which came over a strong field of regional competitors that included 2006 WoO LMS Rookie of the Year Eddie Carrier Jr. of Salt Rock, W.Va.

“There’s no doubt it boosts morale and it makes it seem like it’s all worth it,” Robinson said from his shop two days after his Victory Lane celebration at the well-known half-mile Bluegrass State oval. “When you put in all the time and the effort that we do – when you’re so dedicated to racing and trying to make your life out of it – getting a ‘W’ lets you know why you’re doing it.

“And winning builds my confidence personally. We’ve been good there before so I knew we might eventually get a win, but to do it in the ‘Fall 50,’ a race that has a little bit of prestige and history to it, is a big deal for me and the whole team.”

While Robinson has only one top-five and five top-10 finishes in 38 WoO LMS starts this season and will finish second to Bub McCool of Vicksburg, Miss., in the Rookie of the Year standings, he’s flashed the ability and resilience of a driver who can be a contender for years to come. He fought through two mid-season tests of his resolve (a flip in June, engine woes in August) to make some noise over the past two months, recording a career-best WoO LMS finish of third on Aug. 18 at Merritt Raceway in Lake City, Mich., and his first-ever fast-time honor on the circuit on Sept. 15 at Federated Auto Parts Raceway at I-55 in Pevely, Mo.

Robinson put a cherry on top of his recent surge at Florence, where he stormed forward from the fifth starting spot in the ‘Fall 50’ to take the lead for good on lap six. He pulled off an impressive three-abreast pass to assume command, ducking underneath Carrier and Wayne Chinn of Bradford, Ohio, rounding turns three and four.

“I didn’t even really realize that I went three-wide for the lead until they told me afterward,” said Robinson, who drove his familiar family-owned MasterSbilt No. 7R. “I was trying to be good on the bottom and I kept inching down further every lap. I finally got to a point where I could tell I was gonna be the fastest, so I made a move running into three and then off four I got under Eddie Carrier. I guess Wayne Chinn was on the outside too, but I knew I was gonna clear him so it wasn’t that crazy of a move or anything.

“Then everything seemed to play in my favor the rest of the way. Every time we’d get to lapped traffic a yellow would come out so we didn’t have to deal with that.”

The victory came at a track where Robinson has enjoyed success in the past, including a pair of runner-up finishes in weekly races earlier this year.

“It was nice to get to a track where we had raced quite a few times over the last few years,” said Robinson, a third-year dirt Late Model driver whose only other feature win in 2012 came on May 19 at Brownstown (Ind.) Speedway. “Being on the (WoO) series, I ran at 25 or more new tracks this year, so pulling in somewhere that we have some notes to go off and I know how to get around is a big confidence booster. We were fast right out of the box and could just concentrate on making the right changes instead of playing catch-up all night.”

Robinson was one of three WoO LMS regulars to win a feature last weekend, joining Rick Eckert of York, Pa., and Tim Fuller of Watertown, N.Y., who captured ULMS-sanctioned ‘Ultimate’ events at Pennsylvania’s Hesston Speedway and Friday ($4,400 to win prelim) and Saturday ($10,000 finale), respectively. He will look to extend his success to his final appearances of 2012, including an unsanctioned event this Saturday (Oct. 20) at Kokomo (Ind.) Speedway and the WoO LMS season-ending Peak Motor Oil World of Outlaws World Finals Presented by NAPA Auto Parts on Nov. 1-3 at The Dirt Track at Charlotte in Concord, N.C.

The huge weekend at The Dirt Track – an extravaganza of speed that includes doubleheaders for the WoO LMS, WoO Sprint Car Series and big-block Modified Super DIRTcar Series – is especially important to Robinson. He made his first career start at the four-tenths-mile oval in last Wednesday night’s Circle K World of Outlaws Late Model Showdown (he finished 24th in the 50-lapper), so this will mark his initial assault on the Peak World Finals Presented by NAPA.

“I went down and watched last year,” Robinson said of the Peak World Finals Presented by NAPA. “The atmosphere and the facility really make it a cool race, and the live TV production on SPEED (of the finale on Sat., Nov. 3) is definitely a big deal that gets everybody’s hearts going and everybody excited.

“I’m definitely looking forward to it. If you can go down there and run good – well, being that you’re in Charlotte, where there’s a lot of the racing industry and a lot of important people, maybe you can turn some heads and make something out of yourself.”

The Peak Motor Oil World of Outlaws World Finals presented by NAPA Auto Parts begin on Thurs., Nov. 1, with the big Qualifying Night featuring two rounds of WoO Late Model and Sprint Car time trials and two sets of big-block Modified heats. Each division’s first round of qualifying will apply to Friday’s program and the second round to Saturday’s racing card.