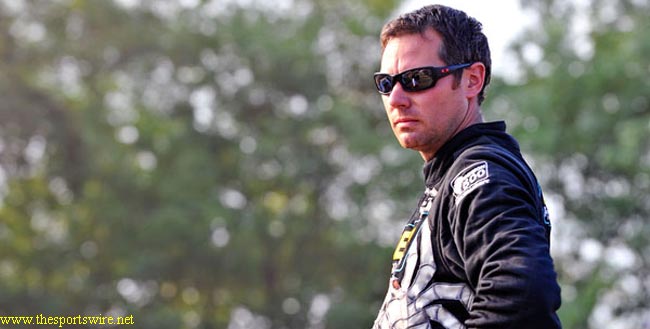 CONCORD, NC – Aug. 14, 2011 – Jeep VanWormer is ready for what just might be the biggest weekend of dirt Late Model racing his home state of Michigan has ever seen.

The World of Outlaws Late Model Series is set to invade the Wolverine State this weekend for a huge doubleheader on Friday night (Aug. 19) at Winston Speedway in Rothbury and Saturday evening (Aug. 20) at Merritt Raceway in Lake City – and naturally, Pinconning, Mich.’s VanWormer feels a special duty to defend his turf against the national tour’s stars.

“Definitely,” said VanWormer, a 36-year-old standout who has arguably become Michigan’s most recognizable dirt Late Model driver. “Anytime there’s a big show in your area you want to put your best foot forward and show everybody what you can do.

“I’m really looking forward to it,” he added, considering the pair of 50-lap, $10,000-to-win WoO LMS events ahead of him. “There’s never been a weekend like this in Michigan for Late Models. It’s exciting to have a chance to run two big shows without having to drive more than two hours (from home).”

VanWormer, of course, usually travels long distances from his residence in north-central Michigan to battle the country’s best dirt Late Model racers. This weekend the big boys are coming to him, contesting a rich swing that will put Michigan in the rarified air of the division’s national spotlight.

“I hope it all turns out well and we get a gold star for Michigan Late Model racing out of this,” said VanWormer, analyzing the significance of the inaugural WoO LMS twinbill. “We haven’t had many big Late Model shows up here, so hopefully this will open the door to more in the future.”

A hard-charger who is annually a top contender on the DIRTcar Summer Nationals ‘Hell Tour’ and in the crown-jewel events at Ohio’s famed Eldora Speedway, VanWormer knows the level of personal satisfaction and circuit-wide respect that comes with winning a WoO LMS A-Main. He is one of 42 drivers to reach Victory Lane on the tour since 2004, accomplishing the feat on Sept. 16, 2007, at LaSalle (Ill.) Speedway.

The past WoO LMS success, however, doesn’t mean VanWormer expects to be listed as a favorite in this weekend’s Keyser Manufacturing 50 at Winston and the Lane Automotive/All-Star Performance 50 at Merritt. He’s confident but also realistic about his chances of winning one for the home team – after all, the 2011 season to date hasn’t been overly memorable for VanWormer, and it’s not like he owns an especially large experience edge over the World of Outlaws travelers at either track.

“I’d love to say that I feel like I’m gonna go in there and stomp their ass at both racetracks, but I know that’s not likely,” said VanWormer, whose only previous WoO LMS start this season came on April 29 at Hartford (Mich.) Motor Speedway (he finished 21st after retiring because he hit the wall while moving into contention). “I feel like I’m gonna have a real good chance at Winston because we usually run good there, but I’m going to be as puzzled as the next guy when we get to Merritt.”

VanWormer has made only four starts at Tom Sprague’s three-eighths-mile Winston Speedway over the past five seasons, but he’s been triumphant in two of them (2007 and 2010). He’s visited Merritt even less frequently in recent years, entering just two races there since ’07.

Merritt was once a regular stop for VanWormer, but that was at the very start of his racing career. He made his competitive debut at the three-eighths-mile oval in 1997 in the Street Stock class, won the division’s championship the following season and ran open-wheel Modifieds there for two more years before moving to dirt Late Models and broadening his horizons to more far-flung tracks.

“I’ve never won in a Late Model at Merritt, but I’ve only run one there about a half-dozen times,” said VanWormer, who is in his 11th season of dirt Late Model action. “Really, I wouldn’t say I have any advantage there. When guys come up to me and ask what tire (compound) to run there, I’m not gonna have an answer because I’m going to be trying to figure that out myself.”

VanWormer will enter this weekend’s doubleheader less than one month removed from his first – and still only – feature win of 2011, the American Late Model Series ‘Lane Automotive 47’ on July 22 at Hartford. It’s been a frustrating season for VanWormer, who campaigns family-owned equipment under the Iron Motorsports banner.

“We haven’t been able to break into that win column very good,” said VanWormer, who has six runner-up finishes this season. “I feel like we’re headed in the right direction now, though. We had some motor problems early in the season but we got that worked out since we started working with (engine builder) Jay Dickens just before the Dream (in June at Eldora).”

VanWormer will enter this weekend’s action on the heels of what likely will be a long night of preparation in his shop. He will be away from home on business this week from Monday through Thursday – in his fulltime position as an inspection technician for his family’s Bayline Fire Protection Inc., he is traveling to Texas to help complete the installation of a sprinkler system at a Fed-Ex facility – so his race car won’t be touched until he returns.

“I’m a one-man band right now,” said VanWormer, who does not have a fulltime mechanic this season. “I’m not gonna have a lot of time to prepare for Winston and Merritt, but we’ll be ready. We’ll have to be if we expect to compete with the guys who will be there.”

VanWormer will face off with a star-studded field in this weekend’s events, including current WoO LMS points leader Rick Eckert of York, Pa., and former tour champions Josh Richards of Shinnston, W.Va. (riding a two-race win streak), Darrell Lanigan of Union, Ky. (the tour’s leading A-Main winner in ’11) and Tim McCreadie of Watertown, N.Y. (a winner of the ‘Who 55’ at Merritt in 2008).

Among the Michigan drivers expected to join VanWormer at the two tracks are Brandon Thirlby of Traverse City (fifth in the DIRTcar UMP national points standings), Brian Ruhlman of Clarklake, Curtis Roberts of Coleman and Eric Spangler of Lake City.

Fri., Aug. 19, at Winston Speedway: Pit gates are scheduled to open at 4 p.m. and the grandstand gates will be unlocked at 4:30 p.m. Hot laps are set to begin at 6:30 p.m. with time trials and racing to follow.

Tickets are $35 and include admission to the grandstand and an all-access pit pass. Children ages 6-12 will be charged $10 and kids 5-and-under are admitted free.