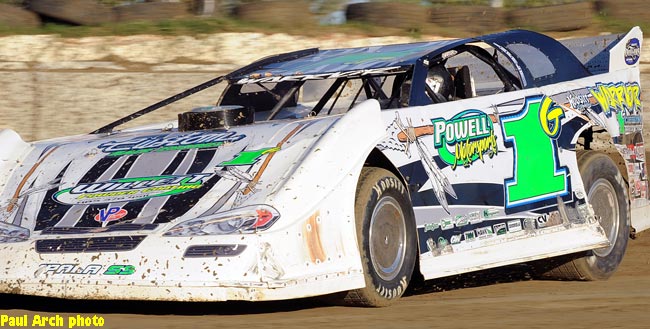 CONCORD, NC – March 11, 2013 – Scott James’s 2013 racing campaign is headed in a direction he could only have dreamed when the year began.

The 41-year-old driver from Bright, Ind., has confirmed that he plans to follow the World of Outlaws Late Model Series fulltime for the remainder of the season, topping off a whirlwind month that saw him debut with Sanford Goddard’s Warrior Chassis house car team, enjoy a solid Georgia/Florida Speedweeks and work out the details that will allow him to compete as a regular on the national tour for the first time in his career.

“We started considering doing the whole (WoO LMS) deal while we were in Florida,” said James, who will earn appearance money and other perks from the WoO LMS as long as he maintains perfect attendance and holds a top-12 spot in the points standings. “When we got home I talked with Sanford and my wife (Megan). We pretty much figured out that, even though we have a one-year-old (daughter) at home, it just made a lot of sense financially to give running the series a shot.

“After the way the car worked in Georgia and Florida and with us being in the top 12 (in points) so far, which assures us of that show-up money to take care of some expenses, I feel like it’s a great situation for me, my family, Warrior, Sanford, Custom (Race Engines) and our sponsors to give it a go.”

James hasn’t run a national touring schedule since dropping off the Lucas Oil Late Model Dirt Series midway through the 2009 season. He competed on that series fulltime for four seasons – winning six times and finishing as high as second (2007) and no worse than sixth (’08) in the points standings – so he’s familiar with extensive travel and points racing.

“I think the experience I had running five years on the road with the Lucas Series helped me know and determine that, ‘Hey, this is a pretty good deal and it has a lot of potential,'” James said of Goddard’s Warrior No. 1G operation. “The World of Outlaws is obviously the highest of high levels in dirt Late Model racing and you have to be prepared for it. When we started the season running good, I definitely felt like the team was capable of competing at that level.”

James’s path to the seat in the Warrior house car began shortly before Christmas when he called Goddard to inquire about the chassis builder’s plans for 2013. After spending the previous two seasons running mostly regionally for Riggs Motorsports – a stint highlighted by his second-place finish in the 2011 DIRTcar UMP Summer Nationals points standings – he was in the market for a new ride.

“I told him, ‘It doesn’t look like I have a lot of things happening up here and I may be able to bring some things to the table if we do something together,'” James recalled of his initial conversation with Goddard. “I said to him, ‘If you want to sit around and mull it over for awhile, I definitely would love to talk to you again about what we could do.’

“There wasn’t much conversation after that until about the middle of January. We started talking more and more and things were clicking and happening, but we kind of kept it hush-hush. A week-and-a-half before the Screven races (to open the WoO LMS season on Feb. 8-9) we got everything done to race together. Finally, two days before we left for Screven, it came out in a press release that we were teaming up.”

James burst out of the box with Goddard in sparkling fashion, finishing third in the 40-lap WoO LMS lidlifter on Feb. 8 at Screven Motor Speedway in Sylvania, Ga. He had several other impressive outings during the season-opening eight-race WoO LMS swing through the Southeast, including two top fives at Bubba Raceway Park in Ocala, Fla. (fifth in the 35-lapper on Feb. 15, second in the 75-lap Super Sunday Showdown on Feb. 17) and a ninth-place finish (from the 25th starting spot) in the 50-lap UNOH DIRTcar Nationals by Summit finale on Feb. 23 at Volusia Speedway Park in Barberville, Fla.

Tackling the complete WoO LMS slate, which currently boasts 53 A-Mains at 42 tracks in 21 states and two Canadian provinces, is a challenge James is eager to accept. With Goddard energized to hit the road and James’s former car owner, Ron Powell, coming on board as a sponsor to provide the team extra assistance, James finds himself in an enviable place.

“I’m real thankful to Sanford for giving me the opportunity to do this,” said James, whose busiest season of WoO LMS competition was 2004 – the tour’s first year under the World Racing Group banner – when he entered 19 events and started 15 A-Mains. “Obviously, I’m not getting any younger. I’m 41 years old. I know age isn’t an issue yet, but I want to take full advantage of this opportunity to go out and try to win races on a national level.

“There will be some things that are different since the last time I was out on the road racing fulltime,” he continued. “Now I got a one-year-old (his first child, Abby, is 16 months old) I’ll be missing while I’m gone racing – that’s something new for me, and there’s gotta be a balancing act there. I’m gonna be away from home a lot, so when I am home between races it’s gonna be important to me to spend as much time as I can with my wife and daughter.

“But I’m pumped to get back out there. We have great equipment, and with Timmy (McCreadie) being out on the road with us (also driving Warrior cars on the WoO LMS) we should be able to share information that will help us both.”

James’s next chance to gun for his first-ever WoO LMS triumph comes March 22-24 during the tour’s Southeastern tripleheader, which features three 50-lap, $10,000-to-win A-Mains at tracks that have never hosted World of Outlaws events. James has never competed at the quarter-mile I-30 Speedway or the three-eighths-mile Whynot Motorsports Park, but he has some history at Duck River Raceway Park, a quarter-mile bullring located about 65 miles southeast of Nashville.