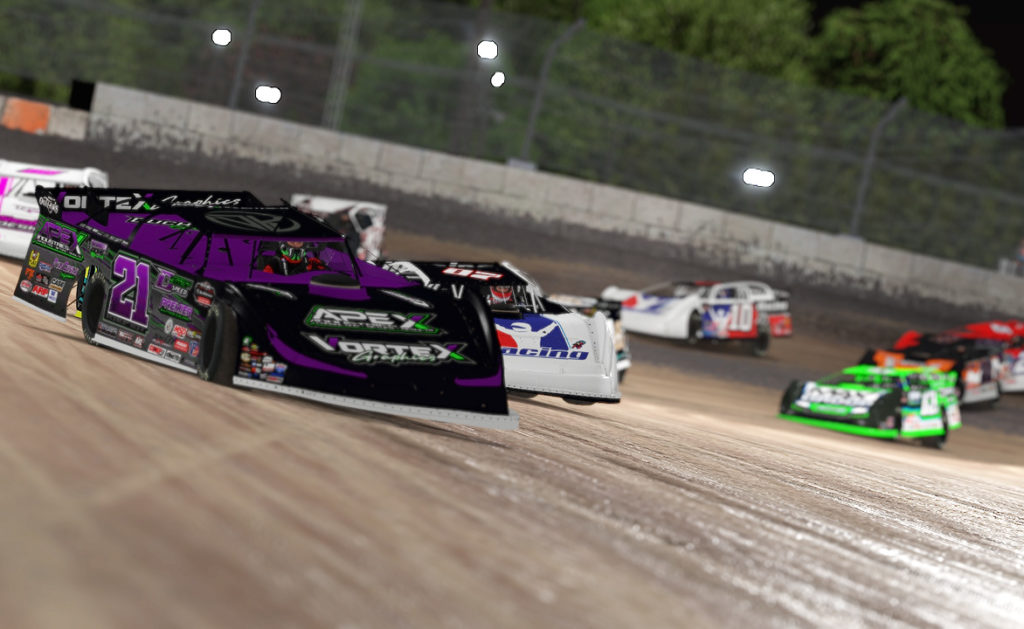 The iRacing World of Outlaws ButtKicker Late Model Series season continues tonight with a visit to Wisconsin’s Cedar Lake Speedway. As always, the action can be seen live at 9PM ET on DIRTVision and twitch.tv/iracing.

Last Race: It was a battle of veterans at the front of the field as the premier Late Model series on iRacing returned to action last weekend at Fairbury Speedway. Rookie Damian Kiefer took the pole, but the experienced Evan Seay took the lead from the first lap and held on most of the way. However, after a late restart bunched the field back up, defending series champion Hayden Cardwell slid past Seay in a photo finish and took the checkered flag by just .048 seconds.

Fellow former series champion Blake Matjoulis would complete the podium, while Kiefer hung on for fourth and longtime series veteran Kendal Tucker completed the top five. Despite two cautions in the race, all 20 drivers finished on the lead lap, but a handful of regular series front-runners like Alex Bergeron and James Edens were eliminated in the last chance qualifiers.

Track Info: New Richmond, Wisconsin’s Cedar Lake Speedway has long been a staple of the real-world World of Outlaws CASE Construction Equipment Late Model Series. The 3/8-mile oval was built in 1957, and looks ahead to the 35th edition of the real-world USA Nationals, its premier World of Outlaws Late Model event, this Thursday through Saturday. The three-day event pays $50,000 to win and $250,000 in total. For more information on the USA Nationals at Cedar Lake Speedway and to buy tickets, click here.

Next Week: Following Cedar Lake, the iRacing World of Outlaws ButtKicker Late Model Series takes on the legendary Eldora Speedway. The Rossburg, Ohio-based half-mile has an extensive history of prestigious events for both sprint cars and late models, with some of the biggest purses in the sport. The most recent World of Outlaws event at Eldora was July’s Kings Royal weekend for the NOS Energy Drink Sprint Cars, which saw Brent Marks win not only the namesake race on Saturday, but also the return of the Historical Big One two days prior.

For more information on iRacing and for special offers, visit www.iracing.com.