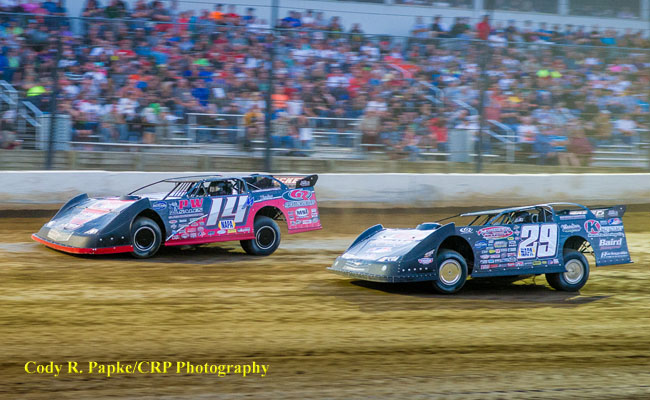 Morgan Bagley’s rookie campaign on the World of Outlaws Late Model Series last year may not have gone as well as he had hoped, but he’s doing his best to make up for it this season.

After falling short of the WoO LMS Rookie of the Year Award in 2013, Bagley, 28 of Longview, Texas, has rebounded with a stellar sophomore season on the national tour. Just past the halfway point on the series schedule, Bagley sits fourth in the WoO LMS championship chase and has been knocking on the door of a breakthrough victory.

“Of course we wanted to do better, but we learned a lot last year and really just went out and got a lot of experience under our belt,” said Bagley, who scored just one top-five finish in 2013 on his way to finishing second to Eric Wells of Hazard, Ky., in the WoO LMS rookie chase. “This year, we came back and knew a lot more about what we needed to do and where we needed to be. With all the experience I got last year, it’s just all kinda started coming together and things are starting to mesh where we’re more competitive night in and night out.”

After an up-and-down start this season, Bagley improved his consistency with eight top-10 finishes in nine events between May and June. He improved even more in July as the WoO LMS headed to the Upper Midwest for the annual Wild West Tour.

Bagley kicked off the four-race stretch with a fourth-place finish at Hibbing (Minn.) Raceway on July 10 before scoring back-to-back runner-up finishes at Deer Creek Speedway in Spring Valley, Minn., on July 13 and Brown County Speedway in Aberdeen, S.D., on July 15. The three consecutive top-five finishes were one more than his previous career top-five tally on the WoO LMS, and the second-place efforts bested his previous career-best A-Main finish of third last season at Canandaigua (N.Y.) Motorsports Park.

“We definitely had a real good swing,” said Bagley, who ended the Wild West Tour with a 12th-place finish at River Cities Speedway in Grand Forks, N.D., on July 18. “We’re just kinda sticking with what we know and what works best for us. Just making small adjustments and putting on the right tires. Everybody’s been working hard and things are going good.”

Bagley was perhaps most impressive at Deer Creek, where he outdueled 2011 WoO LMS champion Rick Eckert of York, Pa., to take the lead early in the 50-lap A-Main and led 20 laps before letting series points leader Darrell Lanigan of Union, Ky., slip by in traffic. Bagley battled back and pressured Lanigan throughout the second half of the race but couldn’t find a way back around the two-time series champion.

Bagley also finished second to Lanigan at Brown County Speedway. While he didn’t spend any time out front in the main event, he again impressed with a run forward from his seventh starting spot and looked under Lanigan multiple times following a late restart.

“It seems like the closer you get the more you want it,” Bagley said of his near-misses on the Wild West Tour. “You definitely can’t hang your head running to second to that guy. We’ve been close; it’s not like we couldn’t see him when the checkered came out. We got to lead some laps and we got to get up there and get close to him.

“He’s a real good driver and he’s real hard to beat. So when we get up there and run with him, it’s just making me better. I’m glad we’re in that situation.”

While he’s happy with his team’s improved performance, Bagley is hoping for even better as he eyes his first series victory. He’ll have plenty of opportunities to go for that long-awaited initial triumph as the WoO LMS hits one of the busiest stretches of the season with 13 races scheduled between now and the end of August. That stretch includes two of the year’s biggest races in this weekend’s $25,000-to-win Prairie Dirt Classic at Fairbury (Illinois) American Legion Speedway and the $50,000-to-win USA Nationals Aug. 1-2 at Cedar Lake Speedway in New Richmond, Wis.

Bagley will first return to action when the WoO LMS hits Independence (Iowa) Speedway for a $10,000-to-win event Thursday (July 24) and will follow the series to Fairbury for the quarter-mile oval’s annual mega-event Friday and Saturday (July 25-26). The Prairie Dirt Classic will be sanctioned by the WoO LMS for the second consecutive year and will also see a purse increase with the winner’s payout up $5,000 from last season. The event is expected to attract well over 50 entries to what many consider one of the raciest tracks in the country.

Like Fairbury, Cedar Lake is also expected to draw a stout field for its crown jewel event. But that doesn’t faze Bagley. Instead, he looks forward to the chance to prove himself at both races.

“Right now I really look forward to all the races we have coming up,” Bagley said. “We’ve got things rolling good and you look forward to going to any track when you’re running like this. I know we’re still gonna have some bad nights, but the way we’re running, I know we’re capable of running with these guys and that really helps you’re confidence.

“It’ll be tough with the big money on the line at Fairbury and Cedar Lake, but I really look forward to those big races because there’s a lot of good guys that come out and run those. I like to see where we compare when you get those tougher fields for the big money races. Hopefully we can keep things running good and get in the mix and be there at the end of those deals.”

Having the confidence that he can compete for victories is a major improvement from where Bagley was one year ago, when the same stretch of racing he’s set to face in the coming week and a half produced just one top-10 finish (a ninth-place result in the USA Nationals tune-up race). But the thought of last year’s struggles no longer haunts Bagley. He knows the hard times were all part of the process.

“The main thing was I just had to stick it out and survive and stay positive and learn from it,” Bagley said. “Everything I’ve raced from go-karts, modifieds or late models, when you’re new to something it takes a little while to get going. I guess there may be some people that are a natural at it and can go out there and compete right off the bat. But I don’t think you see that much at this level. These guys are the best in the sport, and I knew that it wasn’t gonna be easy.

“Of course I hoped it would come ASAP, but I knew that sometimes for some people it takes four or five years to get good at this level and then some guys never get it. I’m just very fortunate that my car owners Wayman and Kay McMillan have given me the opportunity to do this and have given me the time to learn and have stuck with me while I was learning.”

The McMillans have done more than simply stick with Bagley as he struggled through the growing pains of his rookie WoO LMS season. After Bagley’s lucrative open-wheel modified ride fell through in 2010, the McMillans stepped in to not only keep Bagley racing at a high level, but to also give him his first chance to compete in Super Late Models.

“The opportunity they gave me has kept me going,” said Bagley, who joined the McMillans’ race team in 2011 and claimed a regional championship on the Southern United Professional Racers tour that season before expanding to more national events in 2012 and eventually tackling the WoO LMS in 2013. “If it wasn’t for them, I think I’d be very lucky just to race at a local level every Saturday night. I’ve had great people that helped me out on my local stuff back at home, but it wasn’t nothing like this. I just really want to win one for Wayman and Kay and our whole team.”

While Bagley longs to finally score his first WoO LMS victory for both himself and his team, he doesn’t plan to change anything about his approach in order make it happen. Bagley knows that if he simply continues to run among the top five, the victories will come soon enough.

“We’re racing against some of the best drivers in the sport and we’re running right there with them,” Bagley said. “That’s what makes me feel good about what we’re doing. I mean, I want to win races, but I know we just need to focus on our thing and just continue to stay in the top five every night. I think as long as we keep running around that top five, that’s gonna put us in contention to win races. That’s really what I look forward to.”