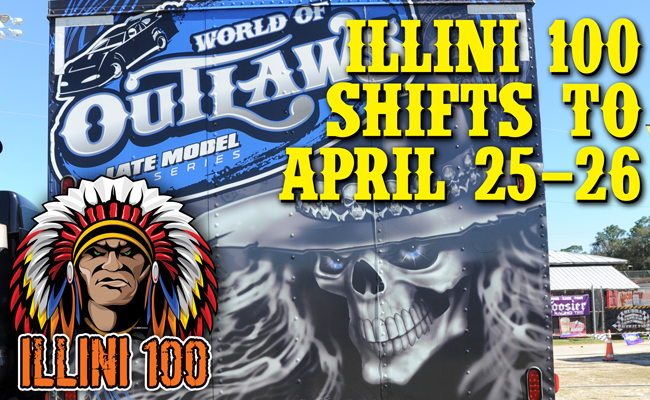 FARMER CITY, Ill. – April 2, 2014 – The World of Outlaws Late Model Series’ Illini 100, scheduled for this weekend at Farmer City Raceway, is being postponed three weeks to Friday and Saturday, April 25-26, to avoid sub-freezing temperatures, a saturated facility and a drenching storm projected to continue into Thursday and Friday.

“This was a tough decision, but after considering the fans, competitors and the facility itself we decided it was in the best interest of all the parties to move the event so everybody could have a better experience,” World of Outlaws Late Model Series director Tim Christman said.

Tickets purchased in advance will still be good for the delayed event. The schedule of events April 25-26 will mirror the current event schedule, with qualifying and heat races on Friday night and mains on Saturday, including the $20,000-to-win feature.

The World of Outlaws Late Model Series will next be in action Friday, April 11, at Duck River Raceway Park in Wheel, Tenn., and Saturday, April 12, at Tazewell (Tenn.) Speedway.

For more information on the World of Outlaws Late Model Series, visit www.worldofoutlaws.com. Fans can also follow the series on Twitter at Twitter.com/WoOLateModels and Facebook at Facebook.com/WorldofOutlaws.