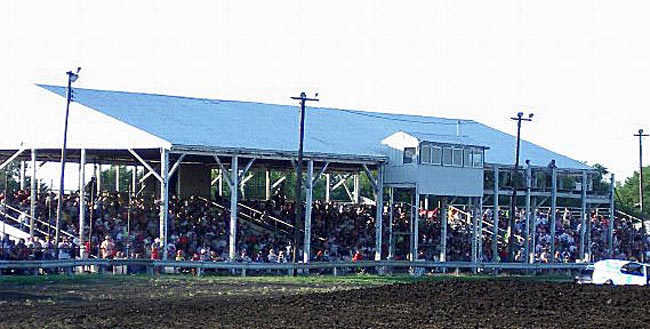 National Tour Roars Back Into Action With Fifth Running Of $20,000-To-Win Spectacular At Tough Quarter-Mile Oval

FARMER CITY, IL – April 1, 2013 – If there’s one thing fans can expect from the fifth running of the World of Outlaws Late Model Series Illini 100 this weekend (April 5-6) at Farmer City Raceway, it’s a close, down-to-the-wire finish.

That’s the history of the $20,000-to-win event, which has annually thrilled fans with races for the win that have remained in doubt until the final lap around the high-banked, quarter-mile clay oval.

Consider the endings of the past four Illini 100 spectaculars:

* Dirt Late Model Hall of Famer Billy Moyer of Batesville, Ark., captured the inaugural Illini 100 in 2008 after nosing out Shannon Babb of Moweaqua, Ill., for the lead coming to the white flag and then beating his protégé to the finish line by less than a half car length. The wild race featured eight lead changes among five drivers and boasts the shortest margin of victory in the event’s short existence.

* Shane Clanton of Fayetteville, Ga., dogged Brian Birkhofer of Muscatine, Iowa, relentlessly in 2009 before finally surging into the lead with just six laps remaining, propelling him to a dramatic triumph. The Southerner remains the only WoO LMS regular to win the Illini 100.

* It was Moyer vs. Babb Part II in 2010, when Moyer outdueled Babb to become the first two-time winner of the Illini 100. Moyer assumed command on lap 72 when Babb slipped high and never looked back, repelling Babb’s late-race bids to win by just a slightly larger margin than two years earlier.

* After the 2011 edition of the race – scheduled to be held at LaSalle Speedway – was canceled due to poor weather, the Illini 100 returned to Farmer City last year and Jimmy Mars of Menomonie, Wis., emerged triumphant. He held off the furious challenges of Union, Ky.’s Darrell Lanigan, who crossed the finish line a mere 0.308 of a second behind Mars.

EYE ON THE PRIZE: No driver craves victory in the Illini 100 more than the 39-year-old Babb, a local product who has come agonizingly close to capturing his home state’s namesake race.

Babb, who has turned countless laps on the Farmer City bullring during his distinguished career, stands as the only racer with a top-five finish in all four of the 100-lappers. In addition to his pair of runner-up finishes to Moyer in 2008 and ’10, he placed fifth in ’09 and was third last year.

Babb’s burning desire to win the Illini 100 has been evident in the on-the-edge, wall-rubbing style he’s flashed throughout the previous four events. His second-place finishes were especially memorable: in ’08 he charged from a last-row starting spot (he was penalized to the rear for changing two tires after entering the staging area) to the lead only to be nipped by Moyer, and in ’10 he tossed his familiar No. 18 around the track with wild abandon in a bid to regain the top spot from Moyer in the closing stages.

Of course, Babb isn’t the only home-grown Land of Lincoln driver who figures to be a contender this weekend. Other Illinois standouts expected to compete include defending DIRTcar UMP Summer Nationals and national Late Model champion Brian Shirley of Chatham, who finished a career-best seventh in last year’s Illini 100; WoO LMS Rookie of the Year contender Brandon Sheppard of New Berlin (DNQ in ’08 and ’09, 21st in ’10, 22nd in ’12); Bloomington residents Jason Feger (finishes of eighth, sixth and 11th in past three 100s) and Eric Smith (18th in ’09, three DNQs); ’12 DIRTcar UMP national points runner-up Kevin Weaver of Gibson City, who has started three of the four Illini 100s but hasn’t finished better than 13th; 2011 DIRTcar UMP national titlist Ryan Unzicker of El Paso (25th in ’09, DNQ in ’10 and ’12); Frankie Heckenast Jr. of Orland Park (10th place finish last year in his only Illini 100 appearance); Mike Spatola of Manhattan (DNQ in ’12); Derek Chandler of Pontiac (24th in ’10, DNQ in ’09 and ’12); and Daren Friedman of Forrest (three career DNQs).

Clanton is the lone WoO LMS regular to reach Victory Lane, but he’s struggled in his other three starts. He finished 11th in ’08, eighth in ’10 and 19th in ’12.

Eckert’s career-best run is a fourth last year, Frank topped out with a ninth in ’09 and Smith’s best was a 12th in ’09.

WoO LMS follower Tim Fuller of Watertown, N.Y., has entered every Illini 100 (top finish of 11th in ’09), but he didn’t start last year’s A-Main after failing to qualify and not having an emergency provisional available to gain entry to the field. Tim McCreadie of Watertown, N.Y., is another WoO LMS regular with three Illini 100 A-Main starts, including finishes of third in ’10 and fourth in ’08; he didn’t compete in ’09 while recovering from a back injury suffered earlier that year in a crash during the Chili Bowl Midget Nationals.

MORE OUTLAWS: New WoO LMS travelers who will make first-ever appearances at the Illini 100 weekend include Scott James of Bright, Ind., who is coming off his first victory with the Warrior Chassis house car team in Saturday night’s Spring 50 at Florence Speedway in Union, Ky., and Rookie of the Year aspirants Eric Wells of Hazard, Ky., Morgan Bagley of Longview, Texas, and Dillon Wood of New Smyrna Beach, Fla.

Bub McCool of Vicksburg, Miss., the 2012 WoO LMS Rookie of the Year, will return to the Illini 100 for the second consecutive year (he finished 28th last season), while rookie candidate Brandon Sheppard will gun for success at one of his hometracks. Pat Doar of New Richmond, Wis., the 2011 WoO LMS Rookie of the Year, said he’s currently “undecided” if he will enter this weekend’s action after getting off to a slow start in February.

HIGH-PROFILE CHALLENGERS: Two nationally-known stars who will undoubtedly be in the pre-race conversation are Birkhofer and Mars, who both have solid performance records in the Illini 100.

Mars, of course, is the defending champion of the Illini 100. He also has finishes of fourth (’09) and 12th (’10) to his credit; he did not compete in the inaugural event.

Birkhofer, meanwhile, has an Illini 100 history that ranks him as a good bet to break into Victory Lane. He was the only driver to lead at least one lap in the first three 100s – and if not for an unfortunate break that left him with a 20th-place finish in ’08 (he caught a rut in turn four and spun into the wall while leading), he might have a top-five finish in every event. He finished second in ’09, fourth in ’10 and fifth in ’12.

Birkhofer will enter this weekend’s action with momentum on his side after winning Saturday night’s DIRTcar UMP/American Late Model Series ‘Thaw Brawl’ at LaSalle Speedway.

ITCHING TO RACE: Thanks to the weather-related postponement of the March 22-24 WoO LMS tripleheader in Arkansas, Mississippi and Tennessee, this weekend’s Illini 100 will mark the national tour’s first action since its season-opening eight-race burst of competition concluded on Feb. 23 at Volusia Speedway Park in Barberville, Fla.

The 41-day lull between Volusia’s final checkered flag and Friday night’s scheduled start of qualifying at Farmer City would represent the second-longest post-Florida layoff for the WoO LMS since its reincarnation in 2004 under the World Racing Group. The longest break came in 2005 when there were 48 days between Volusia and an April 8 event at The Rock/Allegany County Speedway in Cumberland, Md.

ILLINI 100 SCHEDULE: In addition to two nights of WoO LMS action, the Illini 100 weekend will also include a 50-lap, $5,000-to-win UMP Modified show (heat races on Fri., April 5, B-Mains and A-Main on Sat., April 6) and competition for Farmer City’s weekly support classes. The DIRTcar UMP Street Stocks and Hornets will run complete programs on Friday, and the Street Stocks will return on Saturday to battle in another regular racing card.

An open practice session will be held on Thursday evening, April 4, beginning at 6 o’clock. Gates will open at 4 p.m.

TICKET INFORMATION: On-line and phone ticket sales for reserved seat Illini 100 weekend ticket packages will conclude at 5 p.m. ET on Wed., April 3, and then all remaining tickets will be general admission.

Advance-sale reserved seat ticket packages and general admission two-day ticket packages for both nights of Illini 100 competition cost $40 for adults and $20 for children 12-and-under. Fans can make their Illini 100 ticket purchases through Wednesday on-line at www.worldofoutlaws.com/tickets or by calling the event hotline at 877-395-8606.

Advance-sale ticket packages purchased this week will be held for pick-up at the track’s Will-Call window, which will open at 5 p.m. on Thursday and 11:30 a.m. on Friday and Saturday.

Pit passes will be $25 for Thursday’s practice night, but Thursday’s pit admission can be included in an $85 three-day band ($5 discount for DIRTcar UMP members).

To check on availability of the limited number of $75 drive-in parking spots along the fence ringing turns one and two, fans can log on to www.worldofoutlaws.com/tickets or call 877-395-8606.