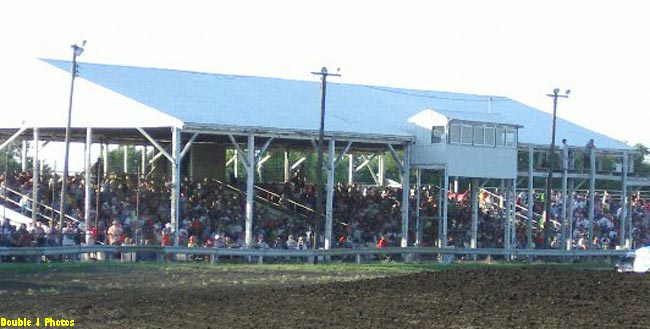 Farmer City promoter Jeff Hammer has organized the inaugural Illini 100 Kickoff Party & Car Show for 4-8 p.m. on March 27 at the Bob Evans restaurant on 1813 N. Neil Road in Champaign, Ill., providing both diehard and casual fans an opportunity to see some of the cars and drivers that will compete in the track’s blockbuster event.

“The Illini 100 is the biggest race of the year at Farmer City Raceway and we’re trying to get the word out in a real good market for us,” said Hammer, who is beginning his second year at the helm of the fairgrounds facility’s weekly action. “The Champaign Bob Evans has joined us as a partner at the speedway this year and they’re giving us a new avenue to expose the track and the Illini 100 weekend in a very busy area just off Interstate 74 near the Market Place Mall.”

The drivers will be with their cars to meet fans and sign autographs throughout the affair, which will also feature a 50/50 raffle, door prizes, special giveaways, driver apparel sales and awards for participants (Best Appearing Car, Bob Evans Guest Pick and Longest Tow).

“It should be a fun night for everyone who comes out and a great way to stir up some excitement about the Illini 100,” said Hammer, noting that the Bob Evans restaurant will offer free dinner to kids during the Kickoff Party. “By the end of the night, hopefully everyone who stops by will be ready to go racing at Farmer City Raceway.”

The anticipation level has been rising steadily for the Illini 100 weekend, which includes Ohlins Shocks Time Trials and qualifying heat races on Fri., March 30, and B-Mains and the 100-lap A-Main on Sat., March 31. An open practice session from 6-9 p.m. on Thurs., March 29 – with free grandstand admission for fans who would like to get a taste of the racing to come – will begin the weekend, which returns to its traditional ‘home’ after a one-year hiatus.

“Everyone’s excited,” Hammer said of the feeling around the Farmer City racing community. “The weather has been so great around here lately – and knock on wood, it’s looking good right through the Illini 100 now too – it’s getting everybody pumped up for some racing. I think you’re gonna see a jump this week in ticket sales, internet talk and general buzz – and then, if the weather cooperates, the weekend will be huge.

“I’ve had so many calls from fans in Iowa, Indiana and Wisconsin who plan on coming down. It seems like since there wasn’t a World of Outlaws race here last year, everybody is real hungry for the Illini to be back.”

A sign of what fans can expect came on March 18 when Farmer City’s first open practice day attracted more than 135 cars spread over the track’s regular divisions. Race teams got a taste of the bullring’s new surface and were impressed.

“We started rebuilding the surface last year,” said Hammer. “We started by getting the banking back to its original conditions, and this year we added new clay to help with moisture control. Our surface is hard, smooth and fast, and I think that’s gonna make for a great Illini 100 weekend.”

Hammer’s preparations for the weekend also include an overhaul of all the track’s bleachers with blue and orange paint – the colors of the University of Illinois Fighting Illini, of course.

“We’re just giving the place a little TLC,” Hammer said of the venerable facility. “The stands needed to be repainted and it just made sense to do them blue and orange for the Illini 100.”

“We have some real good central Illinois boys who can really give the Outlaws a run for the money,” said Hammer, pointing to drivers like Feger, Pierce, Walden, Sheppard, Shannon Babb of Moweaqua (a near-winner of the Illini 100 in 2008 and ’10), defending DIRTcar UMP national champion Ryan Unzicker of El Paso, Brian Shirley of Chatham, Kevin Weaver of Gibson City and Eric Smith of Bloomington.

This year’s Illini 100 weekend will also include a $5,000-to-win DIRTcar UMP Modified event (heats on Fri., March 30, and B-Mains and 50-lap feature on Sat., March 31) and racing for Farmer City’s weekly support classes. The DIRTcar UMP Pro Late Models, Street Stocks and Hornets will run complete programs on Friday evening, and the Pro Late Models and Street Stocks will return on Saturday night to battle in regular racing cards.

Pit gates are scheduled to be unlocked at 4 p.m. for Thursday’s practice and 12 noon on Friday and Saturday, with hot laps set to start at 6:30 p.m. on Friday and 5 p.m. on Saturday and qualifying to immediately follow.

Illini 100 ticket prices (reserved and general admission) are $15 (Friday) and $30 (Saturday), with children’s tickets (ages 12-and-under) priced at $5 (Friday) and $15 (Saturday). Two-day tickets cost $40 (adults) and $20 (children) if purchased in advance, while pit passes are $25 on Thursday, $30 on Friday and $40 on Saturday with a two-day band available for $65 and a three-day band (including Thursday’s practice) offered for $85. DIRTcar members receive a $5 discount on pit-admission packages.

Seats can be reserved in advance for both nights on-line at www.worldofoutlaws.com/tickets or by calling the event hotline at 877-395-8606. Pre-race reserved-seat ticket sales will conclude at 5 p.m. on Wed., March 28, and then all tickets will be general admission.