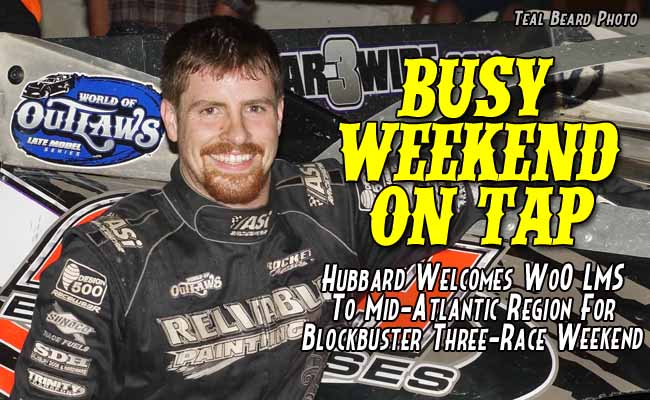 Austin Hubbard’s 2015 season has produced one instance of bad luck after another, but if there’s anything Hubbard has learned in his 10 years of Late Model racing it’s that his luck will change eventually.

This weekend would be a perfect time for Hubbard’s luck to take a turn for the better as the 23-year-old Seaford, Del., driver prepares for the World of Outlaws Late Model Series to invade his home region.

The national tour is set for a tripleheader weekend in a trio of Mid-Atlantic States with a visit to Hubbard’s home track of Delaware International Speedway in Delmar, Del., for the Fulton Bank 50 kicking things off on Thursday. The WoO LMS then heads across Chesapeake Bay to Potomac Speedway in Budds Creek, Md., on Friday before wrapping up the weekend at Winchester Speedway in Winchester, Va., on Saturday.

For Hubbard, who followed the WoO LMS full time in 2010 and ’11 before scaling back to a more regional schedule, the tour’s trek through his home region offers the opportunity to turn around his disappointing 2015 season.

“We’ve definitely had our share of bad luck this year, but I feel better about these races than any I have in a long time,” said Hubbard, whose family-owned race team plans to debut a new MasterSbilt by Huey machine in Thursday’s event at DIS. “I’ve raced at these tracks a lot, and we have a new car built for it. Maybe the new car will bring us better luck.

“This year’s been tough. We’ve had flat tires cost us wins, we’ve bent two cars and just all kinds of stuff. Those things are gonna happen. But we’re gonna be as prepared as possible this weekend, just making sure all our ‘T’s are crossed and our ‘I’s are dotted.”

If his performance in last year’s WoO LMS Mid-Atlantic trip is any indication, Hubbard could certainly find success this weekend. Hubbard opened the same three-race swing last year with a third-place finish at Delaware before dominating Potomac’s WoO LMS event on his way to claiming the third WoO LMS victory of his career and his first since 2010.

His impressive performance a year ago gives him confidence heading into this weekend’s events.

“The first Late Model race I ever won was at Potomac so it was definitely cool to get a Outlaws win there, too,” said Hubbard, whose Potomac WoO LMS triumph came over 2014 WoO LMS champion Darrell Lanigan. “The Outlaws guys are tough, but we were definitely competitive against them last year. I don’t see any reason why we can’t do that again this time.

“Nothing’s changed for us. We’ve still been fast and good enough to win races this year. We’ve just had some bad luck with flat tires and wrecks – we’ve bent two cars this year, and that’s something that really sets you back. It’s been a process trying to build our program back up, but I think we’re back to the point where we need to be where we have fresh stuff going into these big races.”

To score a victory this weekend, Hubbard will have to overcome a star-studded list of WoO LMS national travelers led by points leader Shane Clanton of Zebulon, Ga. Riding the momentum of nine WoO LMS victories this season, Clanton leads the WoO LMS standings by 174 points over three-time series champion Josh Richards of Shinnston, W.Va. Chub Frank of Bear Lake, Pa., is third in the chase for the $100,000 WoO LMS champion’s paycheck with 2006 series champion Tim McCreadie of Watertown, N.Y., and Morgan Bagley of Longview, Texas rounding out the top five.

Gates at Delaware International Speedway open at 4 p.m. on Thursday with racing scheduled for 7. General admission prices are $26 for adults and $5 for children ages 7-13. Pit admission is $35 for adults and $10 for ages 7-13. For more information, visit the track’s website at www.delawareracing.com/DirtTrack

On Saturday, Winchester Speedway’s gates open at 3 p.m. with hot laps at 6:15. Adult general admission is $25 and while children ages 6 to 12 are $5. Pit entrance is $40. More information is available at www.winchestervaspeedway.com.