Hollidge Looks for Another Upset 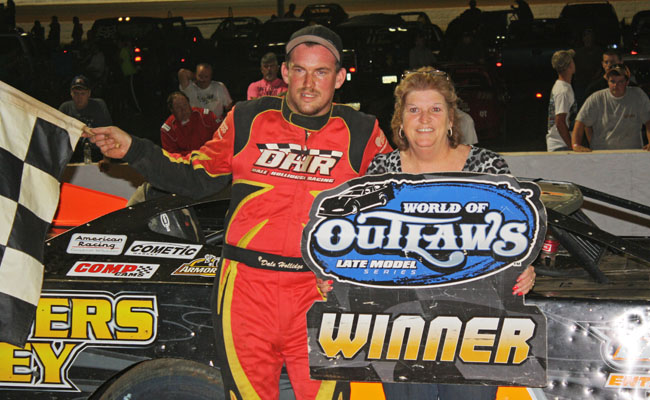 CONCORD, N.C. – Aug. 12, 2014 – It’s not likely that Dale Hollidge will ever forget his World of Outlaws Late Model Series victory last season at Winchester Speedway, but if he ever does, it probably won’t take very long before someone reminds him of it.

Nearly a full year after pulling off one of the biggest upsets ever on the national tour, Hollidge, 25, of Mechanicsville, Md., rarely makes it through an entire race night at one of his local tracks without someone bringing up the biggest moment of his young career.

“It’s kind of crazy how people still talk about it,” said Hollidge, whose surprise victory came in his first WoO LMS A-Main start and marked just his fifth career Late Model win. “We get people nearly every night that’ll come by the car and say ‘Hey, there’s that guy that won the World of Outlaws race last year.’ Fans, other drivers, someone always mentions it.”

Hollidge will attempt to play the starring role in another unforgettable moment this weekend when the WoO LMS returns to the Mid-Atlantic region for a blockbuster three-race weekend. Action kicks off Thursday evening at Delaware International Speedway in Delmar, Del., for the Fulton Bank 50 that was rescheduled from a May 29 rainout.

On Friday, the WoO LMS returns to Hollidge’s home track of Potomac Speedway in Budds Creek, Md., for the first time since the track hosted its only previous series event in 2004 before heading back to the site of Hollidge’s career-defining victory from last season for Saturday’s race in Winchester, Va.

“That’s by far our biggest win,” said Holllidge, who after originally planning to enter all three weekend events recently decided to focus his efforts on the races at Potomac and Winchester. “You never know if you’ll have another opportunity to win a race like that, but I’m looking forward to trying to do it again and seeing what we can do against the Outlaws. I guess we proved we could run with them before, so you never know.”

No longer able to fly under the radar as a relatively unknown underdog, Hollidge feels some extra pressure to perform well in this weekend’s events due to his stellar performance a year ago. But that doesn’t bother Hollidge, who has handled elevated expectations quite well so far this year in putting together his winningest season since making the move to Late Models in 2009.

Hollidge has recorded six victories between Potomac and Winchester this season. His two Potomac triumphs came in special events with a $3,000 victory in the track’s season-opening Cody Endicott Memorial in March and a $2,500 triumph in April’s Vernon Harris Memorial. His four victories at Winchester include a $3,500 payday in May for his first-ever victory on the Three State Flyers regional tour.

Much like he has thrived under the pressure brought on by his breakthrough WoO LMS victory, Hollidge also finds extra motivation in the opportunity to compete against the country’s top drivers. He’ll have that opportunity at Potomac and Winchester in events that will not only include national touring stars of the WoO LMS but also a large contingent of the Northeast’s formidable regional talent.

“I’ve always said that to better yourself you gotta race against good competition,” Hollidge said. “I always look forward to when the Outlaws come around anywhere close to home where we can go race with them. It’s a good opportunity to learn and make yourself a better driver.

“The regional competition around here is extremely tough – I’d say as good as anywhere really. That’s what makes a lot of us around here good drivers. Not just myself, there’s a good handful or even a dozen guys around here that have a legitimate chance of winning one of these races.”

Indeed, Hollidge and the region’s other standout drivers proved their strength in last year’s WoO LMS event at Winchester by claiming seven of the top 10 positions at the finish of the 50-lapper. Hollidge expects that trend to continue in Saturday’s race at Potomac, where many of the WoO LMS regulars have little experience. The tour’s only previous visit to the 3/8-mile oval came all the way back in 2004. That one did go the Outlaws’ way, however, with two-time series champion and current series points leader Darrell Lanigan of Union, Ky., claiming the victory.

“I guess some people might see it as a fluke being that we don’t race on a national tour or get to run those big races much,” Hollidge said. “But with the talent around here, I don’t think it’s a fluke for any of us local or regional guys around here to win. Those touring guys have a lot more experience and all that, but they come here and this is our home track. They might have a little bit of a guessing game just because they don’t know how things go all the time. We race here every week, so we kind of already have the feel of the track and know what to expect.”

The opportunity to compete in a national touring event at Potomac will be a special occasion for Hollidge. Located just a few miles from his home, the track is where Hollidge cut his teeth in racing. After watching his father Ronnie race there growing up, Hollidge began his own driving career at Potomac when he was 15 and advanced through the track’s lower divisions, picking up a street stock track championship before moving to Late Models at age 20.

For the past four seasons, Hollidge has chased Potomac’s Super Late Model championship only to come up painfully short each year in finishing second in the final standings in three out of the four seasons. That hasn’t swayed Hollidge’s love for the track, however, and he’ll look to make up for those disappointments with a strong showing on Friday night.

“It’s only about five or 10 minutes from the house and that’s where I grew up racing,” Hollidge said. “My dad raced there for probably 25 years. That’s where we always went every Friday night, so that place has always been special to me.

“It’d be really special for us to run good or maybe even win there, especially with all the local fans and sponsors that we have here close to home. It’d just be a good deal for everybody.”

While he would love to once again defend his home turf with a WoO LMS victory, Hollidge is realistic in setting his goals for the weekend. He’s optimistic that he can be a contender at both races, but he’ll be satisfied with a pair of strong runs.

“I think we can win,” Hollidge said. “But I’d be happy with two top 10s, maybe a top five in one of them. I feel that we run good at these tracks, so I should be able to get in the show and have a good race.

“Hopefully everything will go good for us at both places. Of course you always have to have a little luck on your side, but I think we have a chance. We’ve been gearing up for it, getting everything ready. Been trying some little things here and there just to see if we can make some advances. If we can keep the car in one piece, I think we’ll be up there in the mix.”

For Thursday’s Fulton Bank 50 at Delaware International Raceway, gates open at 4 p.m. with racing scheduled to get underway at 7. General admission prices for the event are $26 for adults and $5 for children. Pit passes are $35. For more information, visit www.delawareracing.com/DirtTrack.

At Potomac, gates open at 4 p.m. on Friday with hot laps at 7:30. General admission prices are $25 for adults and $5 for children, while pit passes are $40. Visit the track’s website at www.potomacspeedway.com for more information.

Gates open at 4 p.m. on Saturday at Winchester with hot laps at 6:45. Pit entrance is $40 while general admission adult prices are $25 and children are $5.00. Additional info is available by logging on to www.winchestervaspeedway.com.