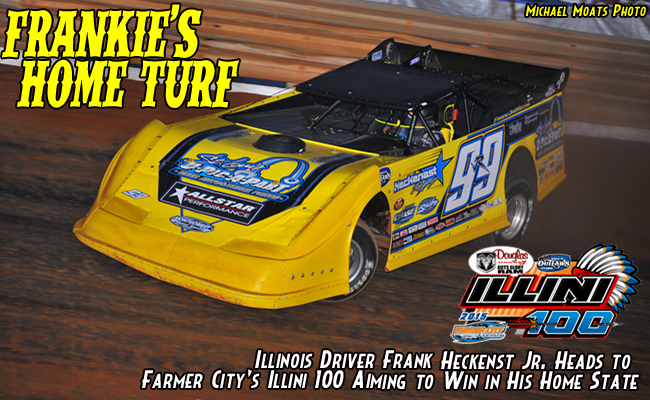 This weekend – with both the 2014 WoO LMS Rookie of the Year Award and his first WoO LMS victory under his belt – Heckenast has his sights aimed much higher as he returns to Farmer City’s quarter-mile bullring for a blockbuster Illini 100 weekend that features separate WoO LMS programs on both Friday and Saturday.

“I would definitely say a lot has changed since last year as far as my confidence and how I approach these big races,” said the 26-year-old Heckenast, who will join a star-studded roster of WoO LMS regulars and an impressive list of regional and local standouts who will compete in a $6,000-to-win WoO LMS event on Friday and a separate $15,000-to-win program on Saturday.

“Last year I went into it praying and hoping to make the race and just get a good run. It almost felt like we were going into it with our back against the wall. Now we go with the goal of running in the top five and maybe even challenging to win it.”

Heckenast has good reason to be more confident in his chances compared to a season ago. He has, after all, spent the past year honing his skills against some of the country’s top Dirt Late Model drivers. In that time, he’s gone from a rookie hoping to stay out of trouble and gain valuable experience to a formidable series contender who regularly runs up front. He proved as much earlier this season with his first series victory on Feb. 14 at Bubba Raceway Park in Ocala, Fla.

Along with helping to improve his skills and build his confidence, touring with the WoO LMS has also given Heckenast a renewed excitement toward his racing program. He enjoys traveling and racing at dirt tracks around the country. But it’s also nice to race close to home on occasion, as Heckenast will this weekend at Farmer City.

“Anytime we can race an hour and a half away from home is good,” said Heckenast whose only two Illini 100 starts produced a ninth-place finish last season and a 10th in 2012. “To see all the people that support us – fans, family, crew guys, other teams and competitors we’re friends with – yeah, we’re excited to see everyone and hopefully put on a good show for them.”

While Heckenast would like nothing more than to thrill his home-state fans by winning one or both of the weekend’s A-Mains, he won’t let the added pressure of performing well in his home state get to him. Being able to handle the pressure from those expectations and not allowing them to affect his performance is another byproduct of his national touring experience.

“I used to let that kind of pressure get to me some, but not anymore,” Heckenast said. “I’ve learned that there’s times you’re gonna have bad nights. You’re gonna struggle some times and it can happen close to home as easy as somewhere on the road.”

Heckenast will, of course, do all he can to avoid any bad nights at Farmer City this weekend. But if he does happen to run into trouble during Friday’s program, he’ll at least start over with a clean slate on Saturday thanks to the event’s new two-race format.

In the six previous Illini 100s contested, all of which featured a single $20,000-to-win event stretched over two days, drivers who struggled during preliminary action on Friday often found themselves struggling to recover for the remainder of the weekend. That won’t be the case at this weekend’s Illini 100, which for the first time features two separate programs.

“I think it’s way better,” Heckenast said of the new format. “Last year was one and done, so you had only one chance to qualify good and one heat race. If you started the weekend off bad, you couldn’t really get out of it. This year no matter happens Friday, you have another complete night on Saturday.

“You’re going home with two paychecks and you’ve got two chances at having a good night. I’m definitely excited for it. I think the fans will love it and it’ll be better for everybody.”

While Heckenast will have the luxury of racing close to home this weekend, he won’t have an advantage from tons of extra experience at Farmer City. Though the track is within two hours of his home, he’s raced there less than 15 times during his 10-year Late Model career.

The lack of experience at Farmer City doesn’t bother Heckenast, but the fact that he hasn’t won a race there does. He’ll look to change that this weekend with another WoO LMS triumph.

“I probably raced there probably 12 or 14 times and got three or four seconds,” Heckenast said. “I’ve never won a race there and it’s always bothered me that I haven’t got it done. Maybe that’s something we can change at the Illini. It would be a good one to win for sure.”

Farmer City Raceway is a semi-banked quarter-mile oval located just south of I-74 in Farmer City, Ill. The track address is 850 North Grove Street, Farmer City, IL 61842. For more information, visit the track’s website at www.farmercityracing.com or call the track office at 309-928-9110.

Following Friday’s racing, there will be a “Party in the Pits” with a DJ. Fans are invited to attend the party and meet their favorite racers and their crew members.

The Illini 100 has routinely matched the hype of its blockbuster status with thrilling on-track action. The event’s inaugural running in 2008 remains one of the best dirt Late Model events ever contested in Illinois with its eight lead changes among five drivers and thrilling late drama.

Storming from the tail of the field, Shannon Babb of Moweaqua, Ill., nearly scored a home-state victory for the ages in the 2008 Illini 100 A-Main, but his last-to-first rally was spoiled by Billy Moyer of Batesville, Ark. Topping off an action-packed 100-lapper, Moyer charged ahead of Babb on lap 99 and turned back Babb’s last-ditch effort to regain the lead in the final corner.

Moyer’s dramatic victory in the inaugural Illini 100 was a sign of more to come for the veteran driver. Through six Illini 100s to date (the race was rained out in 2011), Moyer has claimed three victories and is the only driver to win the event multiple times.

The 2009 Illini 100 produced another dramatic A-Main with two superstar drivers battling to the finish. Shane Clanton of Zebulon, Ga., pressured polesitter Brian Birkhofer of Muscatine, Iowa, for most of the distance before finally taking command on lap 94. Birkhofer mounted a countercharge through the final six circuits, but Clanton held on through traffic.

Moyer returned to the spotlight at Farmer City in 2010. In a race that featured five lead changes among four drives, Moyer found himself once again battling Babb in the closing laps. Moyer pulled ahead of Babb on lap 72 and turned away multiple challenges from the home-state hopeful through the race’s closing laps.

After a rainout in 2011, the Illini 100 returned in full force in 2012 with another of the sport’s heavyweights etching his name on the race’s impressive list of winners. Jimmy Mars of Menomonie, Wis., became the race’s first flag-to-flag victor, holding off late challenges from three-time WoO LMS champion Darrell Lanigan of Union, Ky., in leading all 100 laps.

Fans attending the 2013 Illini 100 saw Moyer win the race for the third time, although they weren’t aware of it on the night of the race. Moyer actually crossed the finish line second that night, while Illinois standout Jason Feger of Bloomington, thrilled his home-state crowd as he appeared to become the first Illinois driver to claim an Illini 100 trophy. However, Feger’s dream-come-true was short lived. Post-race tire testing determined that Feger had used chemically altered tires in the event, leading Feger to be disqualified and Moyer to be named the race winner.

After multiple near-misses, Babb finally broke through to give the Illinois faithful a home-state Illini 100 winner in 2014. Charging forward on a lap-45 restart, Babb swept around Lanigan and fellow Illinois standout Bobby Pierce of Oakwood, to pull ahead. Babb never relinquished the lead, pulling away from Lanigan on a late restart to claim an emotional victory.

The WoO LMS made two visits to Farmer City prior to the inaugural Illini 100 in 2008. Moyer claimed the tour’s first ever Farmer City event in 2006, while Babb won an event at the track in 2007.

*Rookie of the Year contender