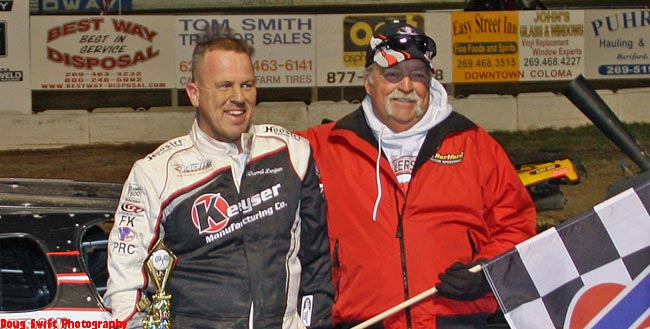 Borden announced on Monday that he was stepping down as Hartford’s promoter for the 2012 season in order to focus on treatment of his medical issues. His daughter and son-in-law, Becky and J.R. Hotovy, have assumed the operational reins of the facility for the upcoming campaign, but their desire to concentrate on weekly racing programs led to the cancelation of the half-mile oval’s mid-summer WoO LMS card.

“Our thoughts and prayers are with Jim, his wife Patty and the entire Borden family as Jim is treated for his health concerns,” said WoO LMS director Tim Christman. “We’re hopeful that Jim will make a full recovery and we’ll be able to visit with him at Hartford Motor Speedway sometime during the 2013 season.”

Hartford’s 2012 DIRTcar UMP-sanctioned racing schedule is set to kick off on Fri., May 4. More information on the track’s season is available by logging on to www.hartfordmotorspeedway.net.

The WoO LMS, which made its first-ever stop at Hartford in 2011, still has three Michigan events on its 2012 calendar. The national tour will contest a Wolverine State doubleheader on Aug. 17 at Winston Speedway in Rothbury and Aug. 18 at Merritt Raceway in Lake City, and a second trip will bring the series to Berlin Raceway in Marne, which will have clay put down on its paved surface for a historic 100-lap, $20,000-to-win A-Main on Sept. 21-22.