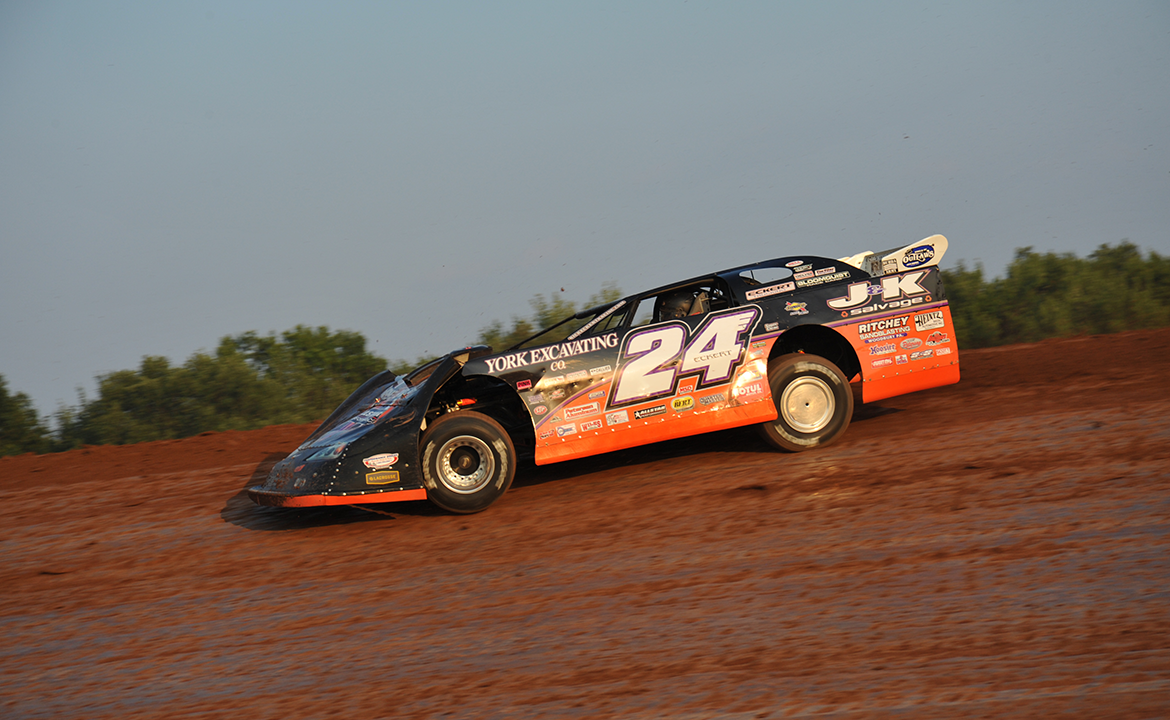 Paul Arch Photo
Former World of Outlaws stars recall two of their memorable wins tonight on DIRTVision
By Jordan DeLucia | April 3, 2020 at 11:54 am

CONCORD, NC – Being inducted into a Hall of Fame is an honor to be cherished, a recognition of a lifetime of accomplishment, blood, sweat and more than a few tears.

The National Dirt Late Model Hall of Fame honors many of the sport’s legends. The names rattle off a sense of awe, drivers known for winning and winning a lot, plus legendary promoters, car builders and more.

Two of those inductees were also heroes on the World of Outlaws Morton Buildings Late Model Series who paved the way for today’s superstars. Chub Frank, a 2004 inductee, and Rick Eckert, a 2017 inductee, hailed from opposite sides of Pennsylvania — Frank from Bear Lake in northwestern Pennsylvania near New York and Eckert from York in central Pennsylvania near Maryland. Rooted firmly in the Keystone State, their skills took them to larger crowds, winning races and thrilling fans across the country.

(RELATED: Tonight, hear from Frank when he’s paired with cousin, former crew chief and current Outlaw racer Boom Briggs to recall a big 2005 payday at Lernerville Speedway, and Eckert when he’s joined by Josh Richards to talk about a 2010 thriller at Attica Raceway Park. Tune into the #DVWatchParty at 7 p.m. on DIRTVision presented by Drydene.)

Frank started racing as a 16-year-old, dominating at Stateline and Eriez speedways, eventually winning the STARS/Renegade DIRTcar championship four consecutive years. His win list is impressive, highlighted by a 2004 victory in the World 100.

And along the way they became fan favorites, two of the most personable drivers who ever signed into the pits. For all of that, they are both in the National Dirt Late Model Hall of Fame and will recount two of their more memorable World of Outlaws Morton Buildings Late Model Series victories tonight at 7 pm on DIRTVision presented by Drydene.

“It’s for sure an honor to be in the Hall-of-Fame with all the great people that are in there,” Eckert said, reflecting back on his career accomplishments and 2017 induction. “The privilege of seeing my name next to so many other legends of the sport certainly is humbling.”

“It feels great to have the respect of the fans and drivers,” Frank remarked about his 2004 induction. “The members of that very exclusive club show just how much talent there truly is in the sport.”

Taken from the perspectives of the men who blazed their own trail into the Hall, most are rather modest when speaking about their place in it. However, from an outsider’s view, some can see what truly makes a legend a legend.

Briggs, who joins Frank tonight on DIRTVision, has been there since the start. He was crew chief on the car featured tonight, and he’s Frank’s cousin who was there for his takeoff in racing. Briggs said it’s the innovative and mechanically advanced qualities that separate just the champions from the Hall members.

“If you go back to where they came from, all those guys that are in the Hall of Fame, when they first started, they didn’t have car owners or bought cars,” Briggs said. “They had to work with what they had.”

Briggs explained how things have changed in Dirt Late Model racing since his time as Frank’s crew chief.

“Just like we discuss tonight on DIRTVision, those cars didn’t drive as good as these cars today, and those guys made it work,” Briggs said. “That’s where I believe it puts the older guys ahead of the newer generation, because they had junk to work with compared to today’s day and age.

“They had to be innovative back then because they couldn’t buy it. Today, you can buy it. Back then, they built it. Whether it was Chub, Eckert, Moyer, Bloomquist, Freddy Smith, doesn’t matter. They had to build what they wanted.”

Tonight, Briggs joins Frank to recall a $20,000 payday in 2005 at Lernerville Speedway when Frank surged to victory in a wild race. Then, Eckert is joined by future Hall-of-Famer Josh Richards as they remember one of Eckert’s favorite wins during his World of Outlaws run, a race in 2010 at Attica where everything went wrong until it didn’t.

The #DVWatchParty with host Dillon Welch begins at 7 pm ET on DIRTVision presented by Drydene.