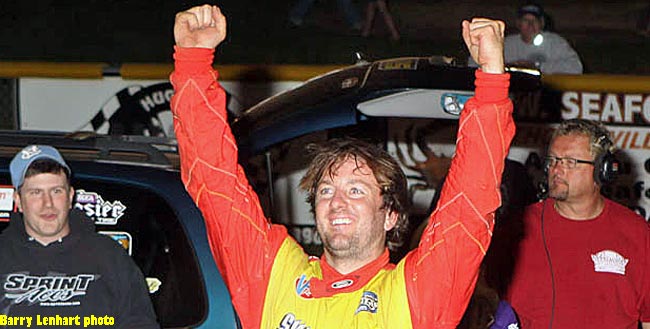 HEATING UP: Tim McCreadie is walking with a bit more spring in his step and smiling a little more brightly.

Yes, a happier T-Mac is materializing as his performance improves – and with the World of Outlaws Late Model Series ready to begin a two-week, eight-race stint in his native Northeast region, his resurgence couldn’t come at a better time.

McCreadie, 38, of Watertown, N.Y., has heated up over the past month, registering four top-five finishes (including a victory) and no runs worse than seventh in six May starts on the WoO LMS and winning twice en route to the Appalachian Mountain Speedweek championship. He’s understandably feeling good about his Sweeteners Plus team as the World of Outlaws circuit contests a pair of 50-lap, $10,000-to-win events this weekend at Hagerstown (Md.) Speedway on Saturday night (June 16) and Eriez Speedway in Hammett, Pa., on Sunday evening (June 17).

“I feel like we’re a lot closer (to finding consistent speed) than we were even two weeks ago,” said McCreadie, who went without a top-five finish on the 2012 WoO LMS until he won the season’s 10th event, on May 4 at 311 Motor Speedway in Pine Hall, N.C. “I thought we were close then, but I think we’ve been learning more and we gained even more the last two nights of (Appalachian Mountain) Speedweek (back-to-back triumphs at Pennsylvania’s Roaring Knob Motorsports Complex and Lincoln Speedway).

“We’ll see when we go racing (this weekend), but I like the direction we’re going. We got stronger the last two nights (of Speedweek) than we had been all week, which is why I feel like we’re on to something.”

McCreadie’s early-season struggles to get rolling with his new Warrior Chassis machines prompted him to change his approach. He’s refocused his efforts, especially since last month’s loss of crewman Barry Knapp left him with only one fulltime mechanic, Craig (‘Snowman’) McCrimmon.

While McCreadie receives assistance at most events from Warrior Chassis’s Sanford Goddard and periodically picks up volunteer help from longtime friends, for all intents and purposes “it’s me and Craig” handling the preparation of the equipment, he said.

“We’ve talked, and we can’t be reactive no more,” said McCreadie. “We gotta always be proactive, always know, ‘O.K., if we got two cars to service, let’s get it done so we can get parts together for something else that’s going on.’ We’re trying to get into a rhythm with everything we do.”

McCreadie wants to get back to running up front race-in and race-out, a level of synchronicity he’s only captured in short bursts since ripping off eight WoO LMS victories in 2005 and winning the tour championship in ’06.

“The only time we’ve been consistent in the last couple years was when the track hit the car and the setup I would like to run,” said McCreadie. “When it would hit us perfect, then you’d see a flash that we were back. We tried all kinds of different things and different programs to get that consistency, but we were only fast when everything fell to us.

“Now I feel like we got a program with our car. We’re starting to get consistency – and once you get your package feeling the way you want it, and it’s fast, you can take it everywhere. Then you can try to do what (Darrell) Lanigan’s doing and string stuff together.”

Lanigan, the current WoO LMS points leader and only driver with more than one win this season (five entering this weekend’s action), has set a high bar for McCreadie and Co.

“What he’s doing definitely makes you raise your game,” McCreadie said of Lanigan, who passed McCreadie in the final laps to win the May 25 WoO LMS A-Main at Wayne County Speedway in Orrville, Ohio. “You have to try harder – I mean, we can’t give him every damn dime we got here.

“It’s not demoralizing that he’s so good right now, but if you’re the right guy it pisses you off. I know who Darrell Lanigan is and I know who I am as a driver, and there’s no reason why I shouldn’t be able to try to get what he’s getting.

“They (Lanigan and his team) went to work and found something, and we were skating along on the same deal. Well, cars change, chassis builders change things, and if you stay on the same path and it doesn’t work for you, then you gotta try something different.

“Right now he’s just really on his game,” added McCreadie, “and I watch what his car looks like and I try to get my car to react like that. I don’t know what he’s doing, but I’m trying to get my car to make it look the same as his. He hustles, but it looks like when he drives smooth, it just drives itself. It just looks really nice out there, and that’s what I’m looking for.

“Hopefully we’re almost there. I feel like we are.”

McCreadie will race this weekend at two tracks where he’s enjoyed some success. He owns two career WoO LMS victories at Hagerstown – both in 2005, when he raced forward from 17th to win a 30-lap preliminary A-Main and then dominated the next night’s 58-lap feature to pocket a cool $15,000 top prize – and he has two fourth-place finishes (from 22nd in 2008 and 14th in ’11) and one seventh-place run in WoO LMS action at Eriez.

McCreadie’s most recent visit to Hagerstown came just two weeks ago when he finished second to Jamie Lathroum of Mechanicsville, Md., in the half-mile oval’s Appalachian Mountain Speedweek event. He raved about the track’s surface that evening.

“It was great,” said McCreadie. “I mean, it was so good. It was awesome to race on.

“It was actually a little bit slower, and you could run all over that thing. Jamie Lathorum could’ve started further back than he did and won the race – he was that good, and the track was that good. Hopefully when we go back it’ll be a lot of the same.”

RETURN TO H-TOWN: Hagerstown Speedway ranks as one of the most prolific host tracks of WoO LMS events – there have been 12 contested at the half-mile oval, including two since the initial 1988-89 run of the circuit under late WoO Sprint Car Series founder Ted Johnson – but Saturday’s 50-lapper will be the tour’s first stop at the Maryland facility since May 15, 2010.

The 2011 season marked the first time of the WoO LMS’s ‘modern’ era that an event was not scheduled at Hagerstown. The only other year since 2004 that Hagerstown did not hold at least one WoO LMS show was 2008 when rain washed out the scheduled date.

Hagerstown traditionally draws one of the WoO LMS’s most talented fields of drivers and Saturday night should be no different.

ALMOST A LOCAL: WoO LMS regular Shane Clanton, who enters the weekend ranked fourth in the points standings but, more importantly, hot off a high-profile $100,000 victory in the DIRTcar UMP-sanctioned Dream by Ferris Commercial Mowers at Ohio’s Eldora Speedway, lives in Fayetteville, Ga., but has connections to Eriez Speedway area.

Clanton, 36, drives this year for Kennedy Motorsports as a teammate to John Lobb of Frewsburg, N.Y., a veteran Eriez racer. The team is owned by former Lobb crew chief John Kennedy, who now lives in Phoenix, Ariz., but grew up in the Jamestown, N.Y., area, about an hour east of Eriez.

In addition, Clanton is engaged to Michelle Davies, the daughter of longtime dirt Late Model standout Ron Davies, who lives just over an hour southeast of Eriez. Ron Davies has enjoyed plenty of success at Eriez over the years, including a career-high WoO LMS finish of second in the track’s 2010 event.

ANNUAL ATTRACTION: Eriez Speedway has become a stalwart track on the WoO LMS under promoter Bobby Rohrer, who has hosted one tour event per season since 2007.

“The World of Outlaws show is our biggest race of the year,” said Rohrer, a longtime Erie area racer and trucking company owner. “Our fans and racers have always supported the race and this year shouldn’t be any different. I’ve been getting a lot of phone calls about it so it shaping up to be another good night.”

The one-third-mile Eriez oval is one of just seven tracks on the 2012 WoO LMS schedule that has presented at least one tour event in each season since ’07, joining Deer Creek Speedway in Spring Valley, Minn.; Delaware International Speedway in Delmar; Lernerville Speedway in Sarver, Pa.; River Cities Speedway in Grand Forks, N.D.; The Dirt Track at Charlotte in Concord, N.C.; and Volusia Speedway Park in Barberville, Fla.

CHUB’S BOY: When Chub Frank returns to his old stomping grounds of Eriez Speedway on Sunday night, he’ll compete against one of his crewman.

John Volpe, a 21-year-old from Lakeland, N.Y., who recently joined Frank’s team as a traveling mechanic after graduating from college, is an upstart dirt Late Model driver on the Eriez/Stateline Speedway circuit and plans to pull double-duty on Sunday. He’ll not only work on Frank’s car but also his own, which he’ll enter in the evening’s WoO LMS action.

Volpe is coming off a strong performance on June 10 at Eriez, finishing second after leading much of the feature distance.

Mike Knight of Ripley, N.Y., who outdueled Volpe to win Eriez’s June 10 event, will be one of the top locals ready to battle the Outlaws on Sunday night. Others include Davies, Rick ‘Boom’ Briggs of Bear Lake, Pa., Robbie Blair of Titusville, Pa., Dave Hess Jr. of Waterford, Pa., Bump Hedman of Sugar Grove, Pa., Chris Hackett of Erie, Pa., and Dave Lyon of Corry, Pa.

SWING CONTINUES: After this weekend’s doubleheader, the WoO LMS will remain in the Northeast to compete on June 22 at Autodrome Granby in Granby, Que.; June 24 at Cornwall (Ont.) Motor Speedway; June 26 at Canandaigua (N.Y.) Speedway; and June 28-30 at Lernerville Speedway (the sixth annual Firecracker 100 presented by GottaRace.com).

Sat., June 16, at Hagerstown Speedway: Pit gates are scheduled to open at 4:30 p.m. and spectator gates will be unlocked at 5 p.m., with on-track action to begin at 7 p.m.

General admission is $35 with children 12-and-under admitted free of charge. Reserved seats are available for $40 and pit passes will be $45.

Hagerstown Speedway is located on Route 40 just south of the Maryland/Pennsylvania border, four miles west of Interstate 81 Exit 6B.

For more information, visit www.hagerstownspeedway.com or call the track office at 301-582-0640.

Eriez Speedway is located on Sampson Road, just off Lake Pleasant Road in the town of Hammett, Pa. The track is three miles south of Interstate 90 Exit 29; take Route 8 South and follow the signs starting in Hammett.