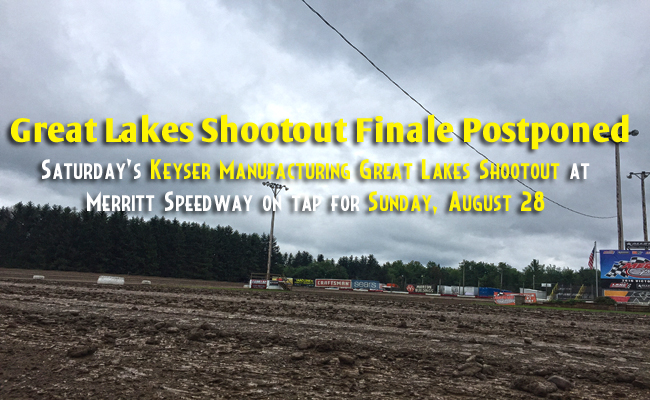 LAKE CITY, Mich. – August 27, 2016 – Persistent precipitation throughout the morning and early-afternoon postpones the Keyser Manufacturing Great Lakes Shootout finale, which was initially set to be held on Saturday, August 27 at Merritt Speedway. The program has been rescheduled for Sunday, August 28.

Gates will open at 3 p.m. ET, with hot laps scheduled for 6 p.m. Those who purchased a ticket for Saturday’s World of Outlaws Craftsman® Late Model Series program will be able to use them on Sunday. A $10,000-to-win, 50-lap Craftsman Club® feature will highlight Sunday’s program. The supporting classes include: pro stocks, pro trucks, U.M.P. Modifieds and four-cylinders.

“I’m looking forward to the race,” Merritt Speedway Owner Michael Blackmer said. “We’re going to put a good show on with the World of Outlaws Craftsman® Late Model Series.  We’re looking forward to it because the track is going to be fast with all this rain we’ve had.”